Would Cancelling All Student Debt Help The Economy? 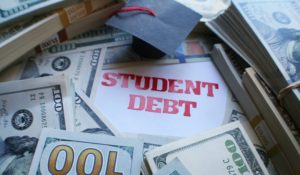 Policymakers have been struggling to identify ways to deal with America’s staggering student loan debt. As of January 2018, Student Loan Hero estimated total outstanding student loan debt at $1.48 trillion, affecting 44 million Americans. Thanks to this debt burden, young Americans are having difficulty achieving typical financial milestones such as home ownership.

Here’s a novel approach to the problem – just make it go away entirely.

A new report from the Levy Economics Institute of Bard College suggests that simply wiping out the current student loan debt would provide significant economic benefit for at least ten years after debt cancellation. The report suggests that unburdened Americans would have more disposable income to invest and spend, resulting in up to 1.5 million more jobs per year and an annual drop in unemployment of between 0.22 and 0.36 percentage points.

Since the U.S. economy is approximately two-thirds driven by consumer spending, the effects should boost economic growth. According to the Levy report, the resulting economic growth would boost gross domestic product (GDP) by $86 billion to $108 billion annually – a decent boost to America’s nearly $20 trillion total GDP.

It sounds like a win-win situation – until you consider that debt cancellation adds to the deficit and effectively spreads the student debt burden across all taxpayers. The government owns the vast majority of student loan debt, and would have to fulfill the payments on the privately-held segment of student loans.

The Levy report suggests creative ways of addressing the debt. For example, having the Federal Reserve accommodate the losses through the purchase of new financial assets, an effect similar to the quantitative easing program applied during the financial crisis. Regardless of the method, the end result is the same: Taxpayers are responsible.

In addition, the premise that the student loan funds would translate directly into spending is shaky at best. Critics may argue that if we’re going to give money back to Americans, why not give it to lower-income Americans who spend a higher percentage of their income by definition?

A final argument against the student loan issue is basic fairness. Anyone who assumes a loan, student or otherwise, assumes a certain amount of risk. Student loans are the one type of loan where the ability to repay is not assessed by the lender and used as part of the decision-making process. Therefore, it’s up to individuals to assess the future value of their degree and manage their loan amount appropriately.

Many student loan borrowers manage to handle their student loan debts responsibly, and the Department of Education has multiple programs to help those who have difficulty managing their burdens – including avenues of deferment, forbearance, and the ability to pay off debt through public service. Why should we reward those who were unable to handle their debt responsibilities?

While it’s an interesting exercise to consider how student debt could be wiped out, such a radical approach is unlikely to occur anytime soon. You can dream about your student loan debt being wiped away, but don’t count on it.

Make sure that you’re controlling spending and budgeting properly to make at least the minimum monthly payments on your student debt burden. If you are waiting for government action to solve your debt problem, you haven’t been paying close attention to history.

Find out quickly at what rate you can refinance your student loan.