A robust economy is good for transport stocks 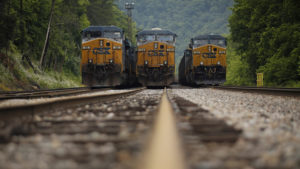 The American economy and the stock market have evolved a great deal since the days of Charles Dow. And in a digital and globally connected business environment, it’s easy to pooh-pooh once-important transportation stocks as relics of the past instead of a bellwether industry.

But regardless of how you feel about their relevancy, transports lately have been delivering nice profits to investors.

There are good reasons for that run. Many investors believe that a robust American economy this year will naturally generate increased volume for the sector as goods and services move around at a higher pace. And after all the focus on growth names like FAANG stocks, it’s natural for the fast money to look for the next trade instead of getting complacent after a big 2017.

Growthy tech stocks tend to make the biggest headlines these days, but investors may want to pay closer attention to some old-school transportation stocks in the year ahead.

Railroad giant CSX Corp. CSX, -0.76% was in the news a lot last year, and not all of the headlines were pleasant.

Yes, the company started the year with a bang after Hunter Harrison took the helm as CEO and made a big cost-cutting push, as he successfully had done for other railroads. His death at the end of 2017, however, added uncertainty to the stock. Shares rolled back almost 10% in mid-December on the news.

The silver lining is that though the unexpected loss of Harrison was indeed a blow, the blueprint for a more efficient CSX was already crafted. Shares have recovered their December losses and have set a new 52-week high as the company approaches the release of fourth-quarter earnings on Tuesday.

Investors are right to be optimistic, after big beats in the first and second quarters last year, and earnings per share that met the mark in the third quarter despite higher expectations.

The new efficiency at CSX are well-timed, as the U.S. railroad industry is seeing increased volume; with combined carloads and intermodal traffic up 4% in December and also up about 4% on the full year, according to the Association of American Railroads.

Wall Street used to closely watch the link between rail traffic and broader economic growth for a reason. If we really are seeing business activity pick up thanks to tax cuts and other growth-oriented initiatives, the uptrend for railroads last year should continue in 2018 — as should the rally in CSX stock.

Another important link in the supply chain is FedEx FDX, +0.71% The shipping giant is coming off a great 2017, with gains of about 34% that handily outperform the broader stock market. And with shares continually hitting new highs, the stock shows no sign of slowing down.

That’s because FedEx just logged another record holiday shipping season, but unlike in years past it managed the volume without any major headaches. That bodes quite well for the company in 2018 — not because late package delivery hurts its brand, but because it hurts the bottom line.

When FedEx was overwhelmed in past years, it increasingly relied on third-party transportation that squeezed margins. That wasn’t a problem this time around, when FDX reported an impressive 11% jump in profits in December.

Looking forward, those improvements in its logistics network will continue to pay off — and even better, management stated the success of previous investments won’t necessarily have to be repeated as it approaches a “transition point” where it can “dial back” on spending to broaden its network. That means there may be relief on the capex front at the same time.

If we see increased package volume thanks to a booming economy and an ever-more-digital retail industry, you can be sure FedEx now has the tools to make the most of that environment.

The company is next expected to report earnings on March 20.

Unlike the other names in the transportation space, Alaska Air Group ALK, -0.65% hasn’t had a lot of success lately. Shares are down by double digits in the last year, and about 25% off their 52-week high of about $100.

However, this cooling off came after a strong multiyear run for the stock. Even after its recent slump, shares are up 230% in the last five years vs. just 90% or so for the S&P 500.

Now that Alaska Air has taken a breather, it’s worth considering buying once more. After all, the same forces lifting other airlines — higher ticket prices and increased travel appetite — will also lift this stock. With a brand that is consistently ranked among the top of the industry, winning No. 1 in customer satisfaction 10 years running from JD Power, why wouldn’t it participate?

Well, part of investors’ negativity was because Alaska Air got caught in a bidding war for Virgin America, and Wall Street thought it bit off more than it could chew. Adding insult to injury, Alaska Air’s debt was quickly downgraded to junk status after the deal closed. Then integration woes proved exactly what investors had feared, and shares took a beating.

But after sitting out a rally among its peers and with broader air travel trends still looking favorable, the time may be right to get back into this stock. The carrier is committed to route expansion and has been a good value in the long term, especially when you consider it has tripled its dividend since 2013. Now that the stock is back trading around 11 times forward earnings, it’s worth a look.

On Friday, Alaska Air reported a 6% increase in revenue per passenger for December and a 5% increase for the full year 2017. It is expected to report earnings on Jan. 25.

It’s hard to imagine a big rig trucking company as having a wide moat. After all, in the age of the self-employed Uber army and the inevitable advent of self-driving vehicles, there seem plenty of threats on the horizon.

However, C.H. Robinson Worldwide CHRW, +0.01% is insulated from the competition by its sheer scale and resulting competitive advantages. Since the 1990s, it has been gobbling up other logistics company to establish a worldwide network that is in a league of its own.

Case in point: Its digital Navisphere platform that provides tools for its customers and any third-party partners to manage and monitor their supply chain. Once a company begins to rely on the smartphone apps and end-to-end tracking capabilities, they don’t quit — and that means C.H. Robinson has a customer for life.

That’s why the logistics giant is expecting 11% revenue growth in its 2017 fiscal year when it reports earnings on Jan. 31.

Beyond operations and fundamentals, it’s also important to note that C.H. Robinson has a long commitment to returning capital to shareholders. The company regularly spends about 90% of profits on dividends and buybacks, and the dividend has doubled in the last 10 years.

Shares have been on a tear lately, jumping about 30% in the last three months, and investors should see that momentum as a good sign.

Last but not least is an aggressive marine shipping play via Textainer Group TGH, +1.25% The stock is up an amazing 150% in the last year, and looks like it’s only getting started after a great run lately has sent it to the highest levels in 2 1/2 years.

The fall from levels seen a few years ago was because of big-picture factors, including slowing global trade growth crimping demand and an overabundance of vessels to supply shipping needs. Textainer suffered some rough losses, but returned at last to profitability in the third quarter. The company expects a repeat performance when it is expected to report earnings on Feb. 13, with analysts forecasting a swing from a loss of 99 cents a share in the previous period to 33 cents in fourth-quarter profit.

The stock’s momentum and fundamental improvement are great, but what really piques my interest is the unique nature of Textainer in the marine shipping sector. Unlike some other logistics players, it actually doesn’t own or operate ships. Instead, it just owns shipping containers — primarily the “intermodal” containers that get taken ashore and put onto trucks so they can reach their end destination.

This niche should allow Textainer to see immediate benefits from the uptrends in shipping and transportation that are lifting the other names on this list, without the headache of big capital spend.

There’s surely a risk of volatility in marine shipping, but lately the big moves seem to be to the upside — and this stock should build on its already impressive run in the months ahead.