The Most Affordable Beach Towns in 2018 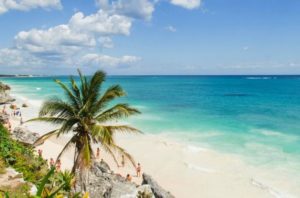 As winter drags on you may catch yourself wondering if summer is ever coming back. But it doesn’t have to be that way. There are plenty of towns across America where it’s possible to spend a few weeks or, if you’re retired, a few months soaking in some warm weather. But, as that year-round warm weather is in demand, affording a home in one of the places can be difficult. With this in mind we decided to find the best beach towns which won’t break your account. Below we rank the most affordable beach towns for 2018.

In order to rank the most affordable beach towns we looked at data on 221 cities. We compared them across four affordability metrics. We looked at median home value, median housing cost, median number of rooms per house and median property taxes paid. Check out our data and methodology below to see where we got our data and how we put it together.

No dramatic changes – What was affordable last year remains affordable this year, for the most part. Only one city, Freeport, lost its place in our top 10, dropping to 17th. There is also only one newcomer to the top 10. Melbourne, which was 11th last year, took 10th this year and Fort Walton Beach, which was seventh last year, dropped to 11th this year.

This is SmartAsset’s third annual study of the most affordable beach towns in America. Check out the 2017 version here. 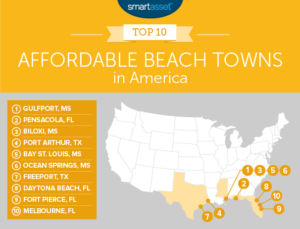 For the third consecutive year Gulfport is the most affordable beach town in America. If you are thinking about buying a house here, you will need to afford a home worth $116,200. That’s not bad when you consider having access to great weather year-round!

If you are thinking about retiring, Gulfport could be a good place to settle. Mississippi ranks as one of the best states for an early retirement.

Pensacola continues to fall just short. For the third year in a row, the city in Florida takes the second spot. The median home here is worth $145,700 and costs $850 per month. For each of those metrics Pensacola ranks in the top 20.

If you want a little more space for your beach home Pensacola might be a better place than Gulfport. Pensacola homes have an average of 6.4 rooms per home, slightly more than Gulfport homes’ 6.1 rooms.

There is no change amongst our top 3. For another year, Biloxi is the third-most affordable beach town in our data set. The median housing cost in Biloxi is actually lower than the two cities above it. The median home in Biloxi costs about $785 per month.

However, getting your hands on a home here is slightly more difficult than it is in some other cities. The median home here is worth $149,100, the third-highest in the top 10.

If you’re looking for an affordable beach home, it’s hard to beat our fourth-ranked city, Port Arthur, Texas. The median home is worth $64,300, meaning a mortgage here should be affordable.

Long term however, Port Arthur comes with costs you will need to be aware of. Specifically the property taxes here are high. The median homeowner here pays around $1,000 per year in property taxes.

Bay St. Louis is the first city in the top 10 to move up or down. The city moved up from ninth last year to fifth this year. The housing costs in Bay St. Louis are a standout metric. The average homeowner pays $729 per month, or $8,749 per year. To afford that and not be considered housing cost-burdened you would need to make $29,160 per year.

If you are in the market for a big home, you may need to spend a little extra time house hunting in this city. The median home has less than six rooms, a relatively poor score in this study.

Homes in Ocean Springs are pretty affordable. The median home is valued at $151,500, according to Census Bureau data and median monthly housing costs are $920.

Property taxes, while low nationally, are relatively high for this top 10. The average homeowner pays almost $1,300 per year in property taxes, the highest mark in our top 10.

For people looking for a bargain, it’s tough to beat Freeport. The median home can be had for only $71,000. The average homeowner in the area spends $565 per month on their home. Those are the sort of numbers that make shivering New Yorkers weep!

Homes here to tend to run on the small side, however, which hurts the city’s overall score. The median Freeport home has 5.6 rooms, 163rd-most in our study.

Daytona Beach is probably better known as a place to hang out during spring break or as a place to catch a NASCAR race. But this is also a great city for thrifty home hunters on the prowl for a place to spend their winter months. The average home is worth about $117,000, a top 10 rate but $5,000 more than last year.

Low home value typically means your most important housing costs, your mortgage, will be low. Daytona Beach has a median housing cost of $757, fourth-lowest in the top 10. It may be possible to get that number even lower if you have great credit and have access to the lowest mortgage rates.

Our study ends in Melbourne, Florida a newcomer to this top 10. Homes in this city do well in all of our affordability metrics. Home value in particular stands out. You probably won’t make a killing investing in homes around Melbourne, Florida but you will certainly have a place to hang out in the winter. The median home here is worth $125,400. That’s $9,000 more than last year. The typical homeowner in the area spends about $850 per month on their house.

In order to find the most affordable beach towns in the country, SmartAsset looked at data for 229 beach towns. Specifically we looked at the following four factors:

Tips for Buying a Home

The most important thing to consider when moving from renting to buying is knowing how much home you can afford. This usually means keeping the total cost of your home below 30% of your net income. And that doesn’t just mean your monthly mortgage payments. That 30% includes property taxes and any other upkeep you need to make on your home. By keeping your housing costs to around a third of your income you can afford to save for retirement and still have some fun.

Nick Wallace completed the data analysis for this study.