Bright red lacy dresses, cosy coats and ripped jeans fill a chic central London boutique decorated with neon signage and stripped wood floors. Shoppers bustle and admire the clothes – but they are not in a hip designer shop; they are in Amazon’s first pop-up fashion store in Europe.

Last week, at the opening night of the Baker Street store, the models Lara Stone and Maddi Waterhouse, the actress Gemma Chan and socialites Pixie Geldof and Rafferty Law brought a sprinkling of stardust to a collection that the US online retailer hopes will make it a major player in British fashion.

The company began selling clothing in the UK only a decade ago but is already snapping at the digital heels of the high-street stalwart Marks & Spencer, with a 4.6% share of the online clothing market.

In the past year it has stepped up activity with the launch of five own-labels – the latest of which is Aurique, an activewear brand that debuted last month. These have helped put the site on the pages of magazines including Vogue and Glamour, and Amazon further beefed up its fashion credentials by poaching senior design and buying experts from across the high street: Marks & Spencer’s former womenswear boss, Frances Russell; Karen Peacock, its former head of design for womenswear and accessories; Primark’s menswear buying director, Glen George; and the former Nike executive Maria Janssen have all been brought on board.

London is the centre of its European fashion empire, with a massive photo studio in Shoreditch where a team of stylists and photographers produce 500,000 images a year for its website.

It’s all part of Amazon’s efforts to move away from a focus on cut-price fashion and simple repeat purchases such as underwear, trainers or sportswear, and persuade women they can rely on it for glamorous party outfits or workwear – a much bigger market.

“There are two categories where we have got a huge opportunity – what people eat and fashion. Fashion is a key category for us as it’s central to people’s lives,” says Susan Saideman, vice-president for Amazon’s European fashion division.

“We are always looking for very high growth and we think there is so much opportunity,” she says, because the size of the online market in fashion is very small.

In terms of the overall market Amazon is still a minnow, with only about 1% market share, according to analysts at Société Générale, which says that 80% of sales remain on the high street, where the online specialist doesn’t play. But half of all fashion spending could go online within 20 years, they add.

Anne Critchlow, an analyst at the bank, says: “The fastest transfer of share is most likely to be from physical stores to the most powerful, aggressive online retailers.” These include Amazon, Zalando, Asos and social media firms such as Instagram.

Amazon doesn’t give separate figures for fashion but its clothing sales are thought to be rising by more than 7% at a time when traditional high street rivals are closing stores. 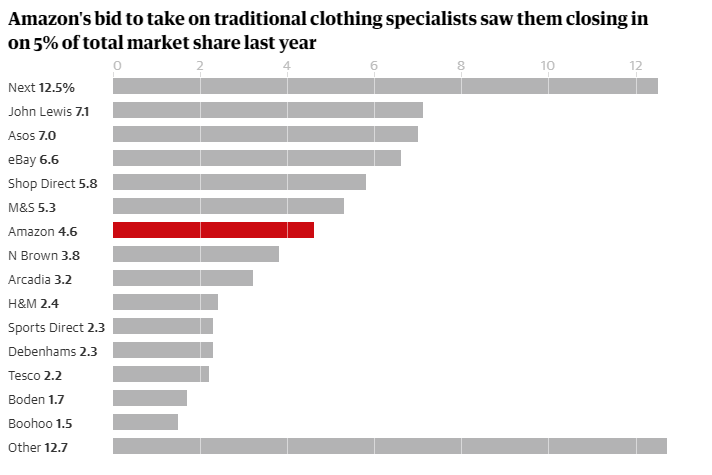 Still, Sam Dover, senior fashion analyst at the market research firm Mintel, says Amazon’s “unemotional” site currently tends to appeal more to men, who are keener on brands and styles they know, and are often simply looking to replace items they already have. And the majority of people still prefer to visit a store, even if they eventually buy online.

“People still want to try clothes on, see them and feel the quality and the size. A lot of that goes against shopping online only,” Dover says.

Amazon suggests that the London pop-up could herald a bigger high-street presence, admitting that it was a “big learning experience” and that it would be quizzing shoppers on their reaction to a physical store.

The main reason people buy clothes online is because they perceive they are getting lower prices, and fast delivery can make it convenient. Amazon’s Prime service, which Mintel reckons a fifth of British adults are signed up to, could be central to winning a loyal following. “If you can order and get next-day delivery [included in the Prime annual subscription] and can get something at the same price or even cheaper, why would you go elsewhere?” Dover asks.

She says Amazon’s growth is hindered because it is difficult to have a clear marketing message if you don’t focus on a particular shopper – in the way, for example, that Asos targets twentysomethings.

The company stocks thousands of brands and aims to constantly add to that total, rather than creating a selection as most traditional operators do – making for a sometimes dizzying array of choices to wade through.

Saideman says Amazon aims to use technology to adapt itself to whoever comes along. “Online is not like a physical bricks-and-mortar store where everyone has the same experience. Online the experience can be customised for each person.”

She adds: “When it started in the US, Amazon was a bookstore and now people think about going there for everything. Nobody thought of that 22 years ago.

“It is early days for us in fashion but we already have a big business. A lot of people are already thinking about Amazon regularly for fashion and there will be more people over time once they get to know us better.”