Dividend growth investing can be a great way to boost your passive income over time. To do it right, though, you have to find stocks that can both grow their dividends faster than inflation and have sustainable free cash flows for the long haul.

Gilead Sciences (NASDAQ:GILD), a blue chip biotech stock, meets both of these critical criteria. Even so, this top biotech is rarely considered purely for its prospects as a dividend growth stock. The reason? Gilead only started doling out a dividend approximately three years ago this month. As a result, the company has yet to shed its well-earned image as a top growth stock within the broader investing community. 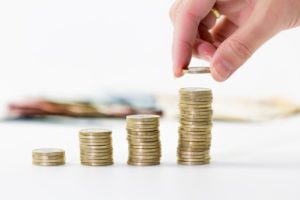 However, I think this underappreciated dividend growth play is worth adding to your portfolio right now. Here’s why.

There are two big knocks against Gilead as a dividend growth stock. First off, the company’s hepatitis C franchise has literally imploded since hitting a high watermark in late 2015. Gilead has thus had to rely on its core HIV franchise to pick up the slack, and that strategy has so far failed to keep the company’s top line moving in the right direction. Despite several new product launches in HIV, the biotech’s top line remains on track to drop by a disastrous 20.3% this year.

Secondly, the Street is deeply concerned about the company’s potential cash outflows going forward. Gilead has been plowing money into its nascent cell-based immuno-oncology franchise in recent months, and this herculean effort isn’t expected to truly contribute from a top-line standpoint for perhaps another three to five years. The bottom line here is that the cell-based cancer therapy space still has a lot of growing up to do before it can become a cornerstone franchise for Gilead, or really any biotech company for that matter.

All that being said, I think these two risk factors are overstated. Gilead’s newly approved HIV medicine Biktarvy appears more than capable of returning the biotech to growth in both the short and longer term. Specifically, industry insiders expect this key growth driver to generate sales in excess of $6 billion per year by 2024. As a result, Gilead’s top line should start to reverse course — albeit modestly — as early as next year, according to Wall Street’s consensus estimate.

Gilead also has a truly astonishing amount of cash in the bank at the moment. Specifically, the biotech exited the last quarter with a breathtaking $32.1 billion of cash, cash equivalents and marketable securities. So there’s little reason to think Gilead can’t continue to be aggressive on the mergers and acquisitions (M&A) front and support its top-notch dividend program at the same time.

How does Gilead’s dividend stack up?

When assessing the attractiveness of any dividend growth stock, I believe it’s important to consider three core metrics: the stock’s annualized dividend yield, its sustainability, and of course, how quickly the company has been growing its dividend over a certain period of time. To measure sustainability, the norm is to use a metric known as the payout ratio, which expresses the total amount of dividends paid out relative to a company’s earnings over the last 12 months.

So how does Gilead fare compared to its peer group within the biopharmaceutical space? As the table below shows, Gilead’s forward-looking yield, payout ratio, and dividend growth rate (over the past three years) are all below average.

What this table really shows, though, is that Gilead has a decent yield that’s been growing modestly since inception and that it’s more sustainable than almost all of its peers. In fact, AbbVie and Pfizer are the only two companies listed below that have dividend programs in better shape than Gilead based on these three core metrics.

In one sense, Gilead might not strike you as a top dividend growth stock, thanks to its fairly high payout ratio in absolute terms. But I think that dire interpretation of the data would be misleading. Not only is Gilead performing better as a dividend growth stock than most of its peers, but the company has done so during one of the most chaotic periods in its existence.

Moving forward, Gilead’s HIV franchise should return the company to modest levels of revenue growth and its stellar clinical pipeline that sports multiple potential blockbusters should eventually boost top-line growth into the high-single-digit neighborhood within a reasonable amount of time. As such, Gilead’s payout ratio appears set to improve markedly from here on out, which bodes well for further increases in the years ahead.