Amazon’s robots sent into disarray by butter spillage at warehouse 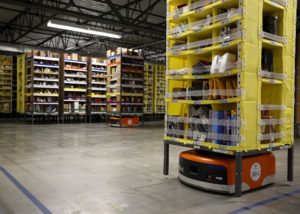 Fears that robots are set to take millions of human jobs may have been overblown – at least for now – after it emerged that spilt butter was enough to confuse Amazon’s machines.

The company uses more than 100,000 robots to pick and carry products around its vast warehouses but the man in charge of technology at Amazon’s robotics division revealed the limits of the machines’ capabilities.

Speaking at the EmTech Next event at Massachusetts Institute of Technology, Tye Brady said the machines lacked “common sense”.

“One time we had popcorn butter that popped off the [shelf], goes down on the floor and then it gets squished, so now you have this huge butter mess in the middle of the floor,” he said.

“And then the robots go, ‘Oh, there’s something unusual there, let me see if I can get an eye on it’. And they all drive through. And, when they were driving through they’d slip, and then they’d have an encoder error and they’d report it. Next thing you know everyone’s looking at spilt butter all over the floor.”

The slapstick scene is not the first time robots have been found wanting. In July last year, a “suicidal” security robot “drowned itself” by driving into a pool at a shopping centre in the US.

The Knightscope security robot, which looks something like a rounded dalek, was designed to be a cheap way of patrolling public areas.

Critics of increased automation claim that it threatens jobs but Amazon says it views its army of robots as supplementary to its 500,000 human employees. “When there are tens of thousands of orders going on simultaneously, you are getting beyond what a human can do,” Mr Brady said.

In April, Bank of England Governor Mark Carney said that advancements in artificial intelligence and robotics pose similar problems to those experienced during the Industrial Revolution and could lead to a rise of Marxism.

“If you substitute platforms for textile mills, machine learning for steam engines, Twitter for the telegraph, you have exactly the same dynamics as existed 150 years ago – when Karl Marx was scribbling the Communist Manifesto.”