Google, Amazon, Apple, and other companies with their own voice assistants have put great effort into making the voices of Google Assistant, Alexa, and Siri sound as life-like as possible. You can definitely tell that you’re talking to a robot and not a real human being, but the voice does sound natural enough that it feels somewhat like you’re carrying on a real conversation. But what if you get tired of hearing that same voice all the time and want to switch things up for the fun of it?

How to change the voice from female to male:

Using your smartphone or tablet, open up the Google Home app. Once you’re in the app, open up the main menu (it’s the three-lined icon in the upper left-hand corner).

Hit More Settings, which you’ll see when you scroll down to the section of the page under Google Assistant. Locate the Preferences button, and give it a tap.

Once you’re in Preferences, hit Assistant Voice, which should be the second available option on the list. Select Voice II to change from Google Assistant’s default female voice to the male voice. If you make the change and later realize you prefer the default voice after all, simply reset the setting as Voice I. But the selections don’t stop there. Google recently unveiled six additional new voices, so users now have a wide variety of male or female voices to choose from. Later this year, users will even be able to hear John Legend’s voice on their Google Home devices. That means Google Home users will eventually have nine different voices at their disposal.

Maybe your child prefers one of the female voices, but you can’t resist the smooth voice of John Legend. The Google Assistant can now use different voices to respond to different people in your household. All you’ll need to do is train the device to recognize your voice, and then the Google Assistant will respond to you in the voice of your choosing.

How to change the accent or language:

Want to know what it would sound like if Google Assistant had a regional accent? Or perhaps you live in a bilingual household and want certain family members to feel more comfortable communicating with Google Assistant? Here’s how to change the language or accent of your Google Home device. 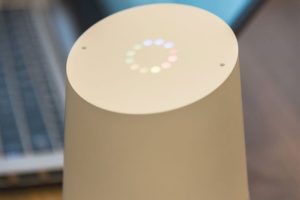 Hit More Settings, which you’ll see when you scroll down to the section of the page under Google Assistant.

Once you’ve selected Assistant Language, you now see a list of English-language regional accents and other languages in which Google Assistant can speak. For example, you can opt to hear what the voice assistant sounds like speaking in an Australian, Canadian, or English accent. Keep in mind that changing the regional accent of the Google Assistant may cause it to not understand you as well if you speak in a different accent.

As for languages, your Google Home can be set to English, French, German, or Japanese. Google announced earlier this year that the company will soon be introducing multilingual speech for its Google Assistant users. With multilingual speech, your Google Home will be able to understand you even if you’re speaking a mix of German, French, and English. Support for more languages will come later on.