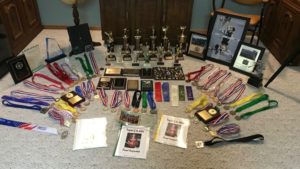 It is unfathomable to those who knew her that the 36-year-old athlete and mother died this week after suffering a massive stroke. It is less surprising that her legacy, aside from her children, will be the lives she saved through organ donation.

After saying their goodbyes 48 hours ago, Sarah’s family — her parents, husband Andy Degraw and police partner Const. Alison Sizer — gather in Barry and Linda Onofrychuk’s home, ready to try to put her incredible life and personality into words.

They oscillate between speaking about Sarah in the past and present tense, having not yet learned to talk about her as if she’s gone.

Before Sarah fell in love with her job, or her husband or most recently her kids, baseball was her “first love.”

She played from the age of five and her husband Andy says she even tried to plan her pregnancies around baseball season.

Sarah played on no fewer than three teams; baseball, basketball and volleyball. Most recently she and her CPS team won a silver medal at the 2017 World Police Fire Games.

Born and raised in Cochrane, Sarah continued to live there with her husband and two young sons, not far from her parents’ home.

Sarah’s medals, trophies and awards are laid out in the basement of her parents home. They are evidence of how intensely driven and goal-oriented Sarah was.

Linda recently pored through all of her daughter’s athletic awards, organizing them by sport, photographing them and made a DVD which she sent to Sarah.

Aside from her sports achievements, Sarah also won CPS awards; a recruitment award and the medal of valour, also known as the Chief’s Award — one of the highest honours at CPS.

At the time of her death, she and Alison Sizer were partners in the SHOP (serious habitual offender program) unit.

It’s been nine years since Sarah put on a CPS uniform for the first time. She and her mom travelled to B.C. to visit Sarah’s grandmother, where she snuck into a bedroom and then came out in her new uniform.

“She had this great big smile on her face and she was just so freakin’ happy and my mom was so proud,” said Linda.

‘I’m going to be a policeman when I grow up’

Sarah had planned for that moment since she was 10 years old.

The way she phrased it says so much about Sarah: She didn’t talk about wanting to be a police officer, she spoke as if it was a sure thing.

That’s pretty much how she lived her life. Sarah set goals and worked until she’d achieved them whether that be academically, in sport, policing and personally.

For days, family held out hope; she squeezed their hands, moved a little bit when they spoke of her son’s up coming birthday and then there was the energy and grit she’d poured into everything else she’d ever done in her life. Surely, she fight through this too.

“Nobody was worried about the stroke and her needing to work through it,” said Andy. “We just needed her to make it.”

Linda agreed: “She would have done it because she had too much to live for.”

‘The boys made her light up’

Sarah’s eldest son turned four on Monday. She and Andy had been planning a birthday party for him and it went ahead, Linda told Sarah as she lay in the hospital bed, squeezing her hand.

Linda thinks her daughter held on until after Rider’s birthday. “I believe that would be her reason: ‘I’m staying for his birthday.'”

It was the same selfless love she always showed her children.

“What a fabulous mom she was, she took the boys everywhere,” said Linda. “I almost had to fight to say ‘let me have them, you guys go somewhere by yourselves for a while.'”

“The boys made her light up even when they’re driving her bananas,” said Andy.

Sometimes people who have incredible drive and determination can also be stubborn.

From the time her two-year-old tomboy daughter could open her bureau, she began dressing herself and refusing to wear skirts or dresses, says Linda.

When Sarah was six-years-old, the family was attending a wedding and Linda begged her daughter to wear a dress. In the end, Linda got her way but she had to pay Sarah $10 to put that dress on.

The mother and daughter were clearly close. They donated blood together for years and it was on one of those occasions Sarah talked about being an organ donor.

“Her choice, she already had everything filled out,” said her husband Andy.

After she died, Sarah’s organs were harvested for transplant; it’s one of the few comforts the family has right now.

“She’s going to continue on,” said Linda. “So many people have a chance to get a little bit of her awesomeness.”

The outpouring of support from the Calgary Police Service, Sarah’s ball team and the University of Calgary provide more comfort to the family, which include a brother and two sisters. In the days Sarah was in the hospital, the waiting room would fill with friends.

Linda and Barry also thanked their daughter’s mentor and former partner Det. Darren Smith who has also been helping the family navigate life after Sarah.

A funeral has been planned for next Friday at the Centre Street Church at 11:00 a.m.

Sarah was “strong, determined, a smile the size of the moon,” says her husband.

Now he and the rest of the family will have to follow the CPS motto as Sarah always did: Onward.

PrevPreviousLow-fare airline expands with non-stop flights out of Prince George, Calgary and Victoria
NextHuawei reportedly plans to launch its foldable smartphone in NovemberNext