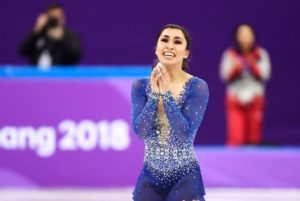 GANGNEUNG, Korea, Republic Of — It was a golden idea that sprouted on their flight home from the Sochi Olympics.

Canada had just settled for silver in the inaugural team event at those 2014 Games, and it didn’t sit well with a team that boasts some of the world’s greatest skaters.

So Patrick Chan, Tessa Virtue and Scott Moir, and Meagan Duhamel and Eric Radford vowed to do one better. Gold in the team event in Pyeongchang would be theirs. And what better way to close their illustrious careers than standing on the podium as one?

Four years later, they did exactly that.

The mighty figure skating team captured Canada’s first gold medal at the Pyeongchang Olympics with a performance that was so utterly dominant, victory was already in their grasp before Virtue and Moir even took the ice in the final event.

“What a thrill to share this with the rest of our Canadians,” Virtue said. “We’re such a skating country, how great is it that we get to bring home the gold medal for everyone.”

Canada won gold with 73 points, well ahead of Olympic Athletes from Russia (66), and the Americans (62).

Monday morning at Gangneung Ice Arena unfolded in dramatic fashion. A first place in the pairs free skate Sunday by Duhamel and Radford had sent Canada into Day 3 with a huge six-point lead.

Chan, who’s struggled all season, took the ice first for Canada and could have crumpled under the pressure. Instead, skating to Jeff Buckley’s haunting “Hallelujah” the 27-year-old from Toronto laid down a performance that all but clinched gold for the Canadians, landing two huge quadruple jumps en route to earning a first-place score of 179.75 points.

“Incredible,” Radford said. “I was so proud of him. Those first two quads were amazing. When I watched him I didn’t move. I just sat there like a statue. I didn’t even know what to think. His skate was one of the most important for the competition.”

Chan spoke with gratitude about a quiet talk with Radford in the dining hall the day before. The 33-year-old Radford told Chan: You owe us nothing. Whatever you do, we’ll still love you. We’ll always be there for you.

“That’s the best thing a teammate can say,” Chan said through a wide grin. “Because it’s my moment as much as it is the team. When we step on the ice it’s our moment, and we need to enjoy it, and then we get off and enjoy it as a team.”

Chan became Canada’s first male singles skater to win an Olympic gold. It was also a long time coming for the man who’s been the face of Canadian skating for a decade, but suffered Olympic heartbreak in Sochi when he finished second.

An American reporter asked: can a team medal make up for missing individual gold?

Gabrielle Daleman of Newmarket, Ont., who Canada subbed in for the long program after Kaetlyn Osmond of Marystown, N.L., handled the short, skated to Gershwin’s “Rhapsody in Blue,” and her third-place performance mathematically guaranteed Canada gold.

“Of course I was nervous, I didn’t want to let my team down. I just skated with all my heart and just was in the moment completely,” said Daleman.

Then Virtue and Moir anchored Canada home. Already decided, it was like star sprinter Usain Bolt taking the baton with no other teams in the race.

Virtue said they learned before arriving at Gangneung Ice Arena that Chan had “nailed it,” and strategized on the bus ride over about how to skate when there was nothing left on the line.

“We also needed to deliver a message and prove that we’re ready and trained,” Virtue said. “We were committed to this, we wanted to be an integral part of the team, we wanted to contribute as best we could. We approached it as if it all came down to us.”

Message delivered. Their passionate performance to music from “Moulin Rouge” earned them 118.10 points — and countless goosebumps in the crowd.

“We weren’t very happy with our approach in Sochi and we wanted to change that,” Moir said. “We thought that this was a serious event that we needed to take just as seriously. We’re proud of ourselves that we set our goals and committed to that.

“And I guess this is where it gets you.”

Even Hollywood producer and director Baz Luhrmann, who won a Golden Globe for Moulin Rouge tweeted: “Moulin Rouge on ice! It’s moving to see so many champions skating their way to @pyeongchang2018 to the music from #MoulinRouge, including @TeamCanada’s @tessavirtue & @ScottMoir.”

Canada arrived in South Korea as the world’s No. 1-ranked team, and is the only country balanced across all four disciplines.

Chan, Virtue and Moir, and Duhamel and Radford are all competing in their final Olympics and were determined to go out on a golden high. Chan took a year off after Sochi, while Virtue and Moir took a two-year hiatus.

The gold was Canada’s first in Olympic figure skating since Virtue and Moir won in 2010 in Vancouver.