Disappearing deposits: What happens when banks lose your money

They thought there was no safer place to put their money — but when tens of thousands of dollars in deposits disappeared, customers of two big banks say they were left to fix the problem themselves.

TD Canada Trust lost $17,000 of Jesse Hardy’s money for almost a year. In June 2016, he deposited stock certificates at his local branch.

The branch was supposed to cash them through TD Waterhouse and deposit the money into Hardy’s account, but a few months later he discovered the money had gone missing.

“You’re trained your whole life that you put your money in the bank and it’s always going to be there for you. I never thought in a million years that I would have a problem,” Hardy said from his home in Courtice, Ont.

Hardy needed the money to help his mother out financially. He says had to “chase” the bank for months, calling every week to find out where his money was.

He became increasingly frustrated when no one called him back. “I aged 10 years in one,” he said.

“It’s not just the stress of dealing with the bank, but it’s also the stress of knowing that my mom needs this money and she’s counting on me to help her with her investment,” Hardy told Go Public.

Hardy says five months passed before the bank told him the stock certificates were missing. He says four months after that, he was told he’d have to get them reissued.

He signed all the paperwork to get that done, then had to undo it all when the bank found the certificates he originally deposited.

“To me it just seems like they did not care at all. You know, it was like, ‘We’re the bank. We hold all the cards here and you know you’re one out of a million customers, your problem is irrelevant to us,” Hardy says.

“In this case, the process was not a reflection of what the experience should be and we apologize for the frustration and inconvenience caused,” TD Canada Trust spokesperson Geraldine Anderson wrote in an email to Go Public.

“Mistakes happen and if there is an oversight on our part, we are committed to making it right with our customer. In this case we regret the length of time it took, however, we can confirm we were able to resolve the issue.

“As soon as management became aware of this situation, we worked directly with the customer to rectify the issue. The stock certificates were cancelled and reissued, and we offered alternative interim solutions, at no cost to the customer.”

Ashley Robinson had a similar experience with Scotiabank. It lost $21,000 worth of certified cheques she deposited to pay off a car loan.

Robinson sold her vehicle to a private buyer in October who paid her with two certified cheques.

She took them to her local Calgary branch, waiting the required five business days for the transaction to go through.

Two weeks later, the bank told her the money was missing. “My reaction was anger, like how could this happen? It’s $21,000. It was a lot of money to me,” Robinson said.

The bank told her there was nothing it could do until it found the cheques, and Robinson could either wait until that happened, or try to get the person who bought her car to issue another certified cheque.

Scotiabank also told Robinson she should keep making payments on the loan for a car she no longer owned until the problem was solved.

She did for a while, but after months passed and still no cheques, she stopped paying.

That’s when the bank’s loans department started calling her asking for the money. She says she worried what not paying would do to her credit rating.

Meanwhile, Robinson says she was able to convince the person who now legally owned her car to issue another certified cheque.

Scotiabank never found the ones it lost.

In a statement to CBC News, Scotiabank says: “We serve more than 10 million customers in Canada and do 400 million transactions every year. Based on this volume, the relatively small number of complaints reinforces that customers are by-and-large well served by our bank.

“While mistakes are rare, human errors can occur. We take each customer complaint seriously and we will always thoroughly investigate the issue and work with our customers to make things right.”

TD Canada Trust also says this kind of problem is rare but, when we asked, neither TD nor Scotiabank would provide numbers on how many such errors are made.

What bank customers agree to when they sign up

Go Public reviewed the terms of service for Canada’s five big banks to see what policies are in place when dealing with situations like the ones Hardy and Robinson faced.

Some financial institutions’ agreements, like Scotiabank’s, say they will take responsibility for issues where “the bank is solely responsible” for errors and problems.

Other terms of service agreements, like the one for TD Canada Trust, say the bank “will not be liable for any damages or errors” no matter the circumstances.

TD Canada Trust told Go Public it wouldn’t apply those terms “in situations where we had made a mistake,” adding it reviews customer agreements regularly to make sure the terms are applied in a “manner that is fair to the customer.”

Advocacy group Democracy Watch co-founder Duff Conacher says the banks aren’t responsive in situations like the ones Hardy and Robinson dealt with because they don’t have to be.

He says agencies in charge of investigating complaints lack independence from the banks and there is no requirement for banks to respond to problems quickly or repay money that’s lost.

Rising rates of complaints suggest Canadians are increasingly unhappy with their banks, according to numbers reported by Canada’s two banking dispute resolution agencies.

Conacher believes the actual number of complaints is much higher, saying most complaints don’t make it to the ombudsman level because customers have to exhaust the bank’s complaint process first, then the bank’s internal ombudsman before they are allowed to take their complaint to OBSI or ADRBO.

“So you add it all up, the banks really control the process, they have all the money on their side, [they] delay and frustrate people, get them to walk away, and the ones who stick with it are dealing with a rigged process that’s in favour of the banks,” Conacher says. 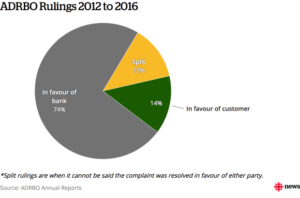 For the same year, 21 per cent of banking complaints to OBSI that were resolved resulted in financial compensation for a customer in 2016. The agency sided with banks 79 per cent of the time. 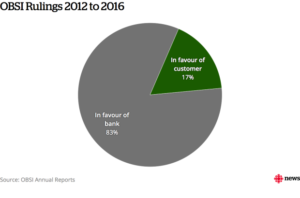 Both Hardy and Robinson tried to deal with their problems directly with their banks. In Hardy’s case, TD Canada Trust offered him two gift cards to a restaurant for his troubles — one for him and the other for his mom.

When he turned that down, they offered him $750 in compensation with the stipulation that the offer was not an admission of fault and that Hardy would release the bank from further liability.

He turned the money down, saying he was looking for compassion, not cash. Hardy says even the letter of apology from the bank didn’t help.

“The final straw was when I got a letter from the vice-president of the bank, they didn’t even have the courtesy to spell my name correctly. It was just mind boggling,” he said.

Scotiabank gave Robinson $500 for her trouble. She accepted, but has since moved all her accounts to another bank.