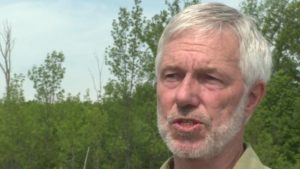 The township of North Frontenac is turning to a volunteering concept known as “contributionism” to help build community projects and improve the local economy.

As the title suggests, rather than being paid for work on community projects, volunteers would instead receive goods and services.

According to Mayor Ron Higgins, the small township north of Kingston, Ont. — fewer than 2,000 people live there — will be the first municipality in the world to attempt such a system.

“The concept is very simple, and it appears it would work very well to help our municipality,” Higgins told CBC Radio’s All in a Day.

North Frontenac’s plan is to start small, only investing about $10,000 per project to begin.

The township’s first initiative will be to build an apiary for beekeeping in the spring, said Higgins, who presented the idea to Frontenac county council last week.

They plan to have residents volunteer three hours a week, building and inspecting hives — and getting free honey in return.

Higgins said the hope is that, in addition to supplying their volunteers with honey, they’ll also produce enough to sell it outside the township.

That revenue would pay off the initial investment, he said, while also going into a “sustainability fund” to fund further projects.

‘Control our own destiny’

“This is a way that we can sort of control our own destiny,” he said.

Once the apiary turns a profit, Higgins hopes the township will be able to channel those funds into larger, more ambitious undertakings — for instance, a local health and wellness centre, or a plastic recycling plant.

“In two or three years time, once this is all done, we will go into the bigger $20-million projects,” he said.

Larger projects would involve a measure of paid employment, he added.

Higgins acknowledged that his own township’s council was skeptical of the plans — as he was, initially. But by starting small, Higgins said he hopes the township will spot and fix any “wrinkles” in the process.

“It’s not a short-term [idea], by any means. But within 10 years, we should be a self-sustainable community,” the mayor said.