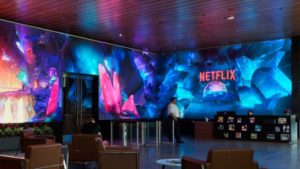 Tsunami warnings or watches were announced for much of the Pacific Rim, including the West Coast of the U.S., following a 7.9-magnitude earthquake off the coast of Alaska. The first waves were expectec to hit Washington state just before 8 a.m. ET and Hawaii around 9:20 a.m. ET.

Stock futures retreated in a matter of minutes following the tsunami warnings, but it was more of a ripple than a wave, with the averages already bouncing back. S&P 500 futures erased a slim gain, fell 0.2% vs. fair value but were back to just below break-even. Dow futures, briefly lower, rallied 0.1% amid a slew of Tuesday morning earnings reports from blue chip members. Nasdaq 100 futures advanced 0.2%, thought that’s off pre-tsunami levels.

Amazon got a modest overnight lift of 0.6%, as the e-commerce and cloud-computing services giant competes with Netflix via Amazon Prime Video. But with Amazon boasting a market cap north of $600 billion, the stock has a notable weighting in the Nasdaq 100. Amazon already rallied 2.5% during the regular session to 1,327.31, as the tech titan opened its cashierless Amazon Go store to the general public

Roku, which makes streaming TV set-top boxes but sees streaming services and advertising as its growth area, popped 3.2% to 45 in early trade. That suggests Roku could retake its fast-rising 50-day moving average. Roku jumped 8.45% to 43.62 during Monday’s session.

The digital publishing software maker said its tax rates will fall “substantially” under the recently passed tax-cut legislation. Adobe raised its current-quarter adjusted earnings forecast to $1.43 a share from $1.27. Analysts were expecting $1.26 at Zacks Investment Research. For fiscal 2018, Adobe upped its EPS target by 70 cents, to $6.20. Analysts expected $5.50.

First Solar rallied 3.7% to 71.50 after Trump imposed a 30% tariff on imported solar panel technology late Monday, though that was off overnight highs. The tariff isbad news for Chinese solar panel makers, including some listed in the U.S. It also likely means higher prices for solar power customers. But the protectionist move is good news for U.S. solar panel makers like First Solar.