Over the last five days of trading, stocks plunged sharply on further news of rising inflation rates. The Dow Jones Industrial Average (DJIA) dropped 1,506.91 points (4.58%) during the week, a full 880.00 points (2.73%) on Friday alone. The S&P 500 Index lost 207.68 points (5.05%) while the Nasdaq Composite Index pulled back by 672.71 points (5.60%). The NYSE Composite Index plummeted by 700.48 points (4.43%) over the week. The losses occurred from Thursday afternoon to Friday, despite early-week strength in the stock market. The sell-down was triggered by the release of May’s higher-than-expected consumer price index (CPI) data. Trading volumes were light and volatility was relatively low, as measured by the Chicago Board Options Exchange (CBOE) Volatility Index (VIX). Volatility, however, kicked up sharply at the end of the week.

Losses in the Nasdaq Composite, which tracks tech stocks, were worse than that of the broad market as higher interest rates reduce the attraction of companies whose earnings may not be realized until well into the future. Value stocks outperformed growth stocks. Furthermore, oil prices maintained their upward trek for most of the week although they did retrace somewhat on Friday. Major retailers were perceived to continue their struggle caused by mismatches in supply and demand, worsening their inventory problems.

The biggest market-moving data for the week was the release on Friday of the U.S. CPI reading for May. The reported year-over-year figure came out at 8.6%, hotter than the expected 8.2%. Core CPI, which excludes food and energy, registered 6.0% which is only slightly above the forecasted 5.9%. Analysts continue to reiterate that a recession is far from inevitable. While headline inflation continued to move substantially higher driven by rising oil and food prices, core inflation appears to be gradually easing.

This month, the widest differential between headline and core inflation has occurred than has been seen in the past ten years. While the Federal Reserve may try to moderate consumer-discretionary demand by raising interest rates, such measures generally do not influence global community prices or the demand for food, energy, and other consumer staples. The Fed remains focused on driving down core inflation, and its attempts appear to be taking effect. There was a modest decline in core inflation his month, from 6.2% to 6.0% year-over-year, in part due to better prices for medical care and transportation services.

As a result, impending higher mortgage rates may cool the housing market, which may, in time, temper the shelter/rent components of CPI. The early signs of layoffs in such areas as the technology sector may likewise begin to cool the upward pressure exerted by wage growth on inflation. Overall, it is foreseeable for inflation to moderate some time by the end of 2022, according to analysts’ base-case scenario – that is, driven by base effects evident as more favorable year-on-year comparisons, and better trends in core inflation. In the near term, however, the rising food and energy prices may still create a bear-case scenario for the economy.

The gold market came to life on Friday after a relatively quiet week. Investors reacted to the hotter-than-expected inflation announcement at the week’s end, despite economists’ expectations of a continued decline in consumer prices in May. Instead, the U.S. Labor Department announced that its CPI reading rose 8.6% for the month, establishing a new 40-year high. Analysts have begun to call into question the Federal Reserve’s credibility as investors became doubtful that the central bank can bring inflation down. Gold prices performed impressively on Friday, swinging $50 from the bottom of its range only slightly above $1,825 per ounce to test its significant resistance at $1,875 per ounce.

Just at a time when prospects appeared to improve with the gradual disappearance of COVID-19, the reimposition of lockdown restrictions in Shanghai and Beijing continued to apply pressure to the oil markets in the form of pandemic-related demand losses. China’s failure to quickly bound back from the coronavirus was the main diver for the downward force on oil prices in the past months. When it anticipated a quick return to normal levels in economic activity over June, China loaded up on oil and oil products in May, which now, in hindsight, may lead to lower imports. The failure of China’s expected demand surge to materialize is now weighing down oil prices, giving back the gains made earlier in the week and causing ICE Brent to fall back to $120 per barrel on Friday. In the meantime, anti-oil rhetoric from White House officials lambasted oil and gas companies for failing to subdue rising fuel prices. Officials admit, however, that the windfall tax is an option on the table, with U.S. firms expecting to generate $834 billion in free cash flow for 2022.

For the report week from June 1 to June 8, 2022, natural gas spot prices rose at most locations. The Henry Hub spot price climbed from $8.42 per million British thermal units (MMBtu) at the beginning of the week to $9.46/MMBtu by the week’s end. These are the highest daily prices since February 2021, when a winter storm contributed to near record-high spot prices. International natural gas spot prices were mixed during the report week. The average weekly swap prices for liquefied natural gas (LNG) cargoes in East Asia remained unchanged week-over-week at $23.77/MMBtu. In the Netherlands, where the Title Transfer Facility remains the most liquid natural gas spot price in Europe, the day-ahead price fell $2.02/MMBtu to a weekly average of $24.49/MMBtu. Comparing this week’s prices to their counterparts last year, for the week ended June 9, 2021, the price in East Asia was $10.65/MMBtu while that at TTF was $9.58/MMBtu.

In the United States, prices along the Gulf Coast rose as higher temperatures resulted in increased demand for air conditioning. Across the West, prices rose as temperatures increased in California and the Desert Southwest. Prices were mixed in the Northeast due to differing fundamentals. U.S. natural gas supply remained unchanged week-over-week at 100.8 billion cubic feet per day (Bcf/d) while natural gas demand increased due to rising temperatures across the country. U.S. LNG exports decreased by one vessel this week compared to last week.

European shares took a sharp dive upon the announcement by the European Central Bank (ECB) that it may increase interest rates faster than expected after July when it ends its ultra-accommodative monetary policy. The ECB signaled that it is planning to raise its key deposit rate, which currently remains at -0.5%, by a quarter-point in July to control the record inflation.  The bank also suggested that if the medium-term inflation outlook deteriorates further, a larger increase may be decided upon at the September meeting. The pan-European STOXX Europe 600 Index closed the week lower by 3.95% in local currency terms, and Italy’s FTSE MIB Index dropped 6.70% amid concerns that the country may not be able to manage its national debt load without central bank support. Germany’s DAX Index gave up 4.83% while France’s CAC 40 Index also slumped by 4.60%. The core eurozone bond yields jumped, mainly in reaction to the ECB policy meeting which investors perceived to be more hawkish than expected. Peripheral eurozone and UK government bond yields broadly followed the core markets.

Japan’s stock markets, on the other hand, registered moderate gains for this week. The Nikkei 225 Index rose 0.23% while the broader TOPIX Index move up 0.51%. The positive sentiment may be attributed to Cabinet Office data indicating Japan’s economy shrunk by an annualized 0.5% over the first quarter of 2022, lower than the expected 1.0% contraction. The better-than-anticipated economic performance was seen to be the result of the country’s reopening tourism industry. In the fixed income markets, the yield on the 10-year Japanese government bond rose to 0.25% from 0.23% at the end of the previous week. The yen continued to remain weak, providing a boost to Japanese exporters. The currency ended the week at approximately JPY 133.9 against the U.S. dollar, from the earlier week’s JPY 130.8. The exchange rate continues to remain close to its two-decade lows. The further weakening of the yen has senior officials from the Bank of Japan (BoJ) expressing their concerns. BoJ Governor Haruhiko Kuroda said that since Japan’s economy has not yet recovered to its pre-pandemic levels, the bank must continue to extend its support for economic activity by continuing with its current monetary easing.

In China, stock markets rallied on the hope of looser monetary policy and perceived signals from Beijing that it was easing its years-long crackdown on technology companies. The broad capitalization-weighted Shanghai Composite Index gained 2.7% while the blue-chip CSI 300 Index, which follows the largest-listed companies in Shanghai and Shenzhen, surged 3.7%, its biggest weekly gain since February 2021. Regulators are closing down their investigation into DiDi Global, the ride-hailing mobile app, and will restore it in domestic app stores. Authorities are reportedly in talks concerning the revival of the initial public offering for fintech company Ant Group which was halted in December 2020 after its founder, Jack Ma, made critical comments regarding China’s financial regulators. These two developments are perceived as a sign that Beijing is easing its regulatory clampdown on the tech sector that began at the end of 2020. A further indication of the government’s policy relaxation is the granting of publishing licenses by the country’s gaming regulator to 60 online games. This is the biggest approval of titles for computers and smartphones going back to July 2021. The yield on China’s 10-year government bond ended the week at 2.82%, roughly unchanged from a week ago.

Among the important economic data expected to be released in the coming week are the Fed fund target interest rate, business inventories, and producer price data. 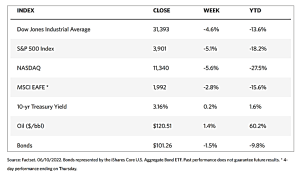