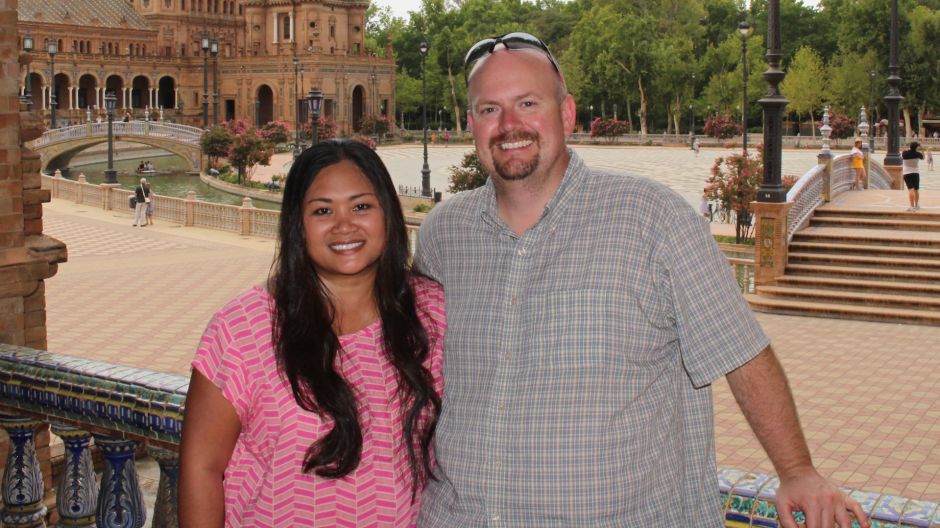 The typical American retires in their early 60s. Justin McCurry, a father of three based in Raleigh, North Carolina, quit his engineering job in 2013 and retired at age 33. His wife, Kaisorn, joined him in early retirement in 2016 at age 38.

“Neither of us ever reached a six figure salary, with my salary topping out at $69,000 and [Kaisorn’s] at $74,000,” Justin writes on his blog, Root of Good, which explains how he saved more than $1 million in 10 years to retire early.

“No winning lottery tickets or inheritances, either,” he says. “Just steady saving and investing in our low cost index fund portfolio year after year.”

Their journey to early retirement began in 2004, when Justin graduated from law school and landed a job at an engineering consulting firm. Kaisorn was still in law school, meaning their combined annual income was Justin’s $48,000 salary. They had a good bit in savings already: Between the two of them, they had accumulated $49,000 from investments during college and grad school.

Over the next decade, thanks to incremental raises and careful saving and investing, their portfolio grew to more than $1.3 million, enough to support their modest lifestyle in retirement.

By carefully tracking their expenses and living frugally in Raleigh, “every year we saved more than half of our income,” Justin tells CNBC Make It. At their peak earning period, they were making a combined $138,000 and saving up to 70 percent of it.

They didn’t just save a ton of money — they put their money to work. “We consistently pumped our savings into 401(k)’s, IRA’s, HSA’s, 529’s, and regular brokerage accounts,” Justin writes. “These investments grew enormously over roughly 10 years and made us financially independent today.”

You can see a detailed breakdown of how their money grew from 2004 to 2014 on their blog.

It’s been five years since Justin left the workforce and two years since Kaisorn followed suit. CNBC Make It, which profiled the couple in April 2017, checked back in with the McCurry family and asked about life in early retirement.

What is your budget in retirement?

In 2016, for example, the McCurrys revisited their portfolio and realized they could increase their retirement budget to $40,000 a year. On the flip side, they can “always trim back on spending in some areas if our investment portfolio performed really poorly or we had an unexpected expense in one category,” Justin says.

They’re still aiming to spend $40,000 a year but, since their portfolio has gone up quite a bit in the past couple of years and they’ve earned money from their blog, “we’re giving ourselves permission to spend $5,000, $10,000 or $20,000 more than that if we find something worthwhile to spend it on,” says Justin.

Flexibility is key in early retirement, he adds: “You may have to spend less if the markets go down. Or, you may be able to spend more than what you originally budgeted for. … As long as you’re OK cutting back on some of the wants if your portfolio goes down, then you can still cover your needs without worrying about depleting your assets prematurely.”

How are you managing family expenses?

Even after the McCurry’s started having kids in 2005, they managed to maintain a high savings rate by taking advantage of the benefits offered by their companies, having family help out with child care and using hand-me-downs.

“We had good health insurance, so we weren’t paying a lot out-of-pocket for the child delivery,” says Justin. “We had Grandma watch the kids — we gave her some money, but it wasn’t $20,000 per year — so we lucked out just by staying close to where we grew up.”

“After childbirth, we didn’t spend a whole lot,” he continues. “We bought a mattress, crib and some child seats, so it was several hundred dollars, but not thousands and thousands. Having kids was kind of a blip on the radar in terms of spending.”

Today, their kids are six, 12 and 13, and they all attend public school. Plus, “we don’t go overboard when there’s the big study abroad, expensive field trips,” he says. “Instead of spending $2,000 or $3,000 to send one of the kids to Spain for a week, we would spend that same amount of money, or less, and to go to Spain for the entire family.”

The couple has already started planning for college costs by setting aside “several years of tuition for each one of them,” says Justin. It’s “not a full ride,” he notes, but “I don’t think it’s necessarily a foregone conclusion that we would pay 100 percent of the price. … So we’re having those discussions with our children about public schools versus private schools, looking into scholarships and getting them ready academically to compete for scholarships.”

Justin estimates that they spend “probably one-half or one-third of what most people report spending on kids.”

According to a report from the Department of Agriculture, families spend $233,610 per child — and that number doesn’t include college costs. Still, “they have phones and they have computers and games and bikes and we go on vacation with them,” he adds. “They have a pretty normal upbringing other than their parents are retired early.”

What does a day in the life of an early retiree look like?

“We get out and about more during the day now,” he adds. “It’s a nice feeling to have that freedom of time. What a lot of people do on the weekends, we do that seven days a week, more or less, now.”

They also have more time to travel: “Every summer we take usually a month or two to go on vacation somewhere internationally, like the Bahamas, Mexico, Europe — this coming summer we’re going to Southeast Asia for eight weeks, so it’s a big shift from the normal vacation of one or two weeks for most working people.”

Do you ever miss working?

“No, I have to say definitely not,” says Justin. “There may be some small aspects of it, in terms of working on big projects that I would miss … but in terms of the constraints on lifestyle and requirements to show up every day at 8 a.m. and do things and be on a schedule and have deadlines, I definitely don’t miss at all.”

Kaisorn adds: “For me, the only thing I miss is the interaction with my colleagues. But outside of that, no, I don’t miss the waking up early in the morning and getting home late and hardly seeing my kids.”

Retiring early “was pretty great five years ago and it’s still really great now,” says Justin. “We’re sitting on the couch or outside walking around or going shopping in the middle of the day on a Tuesday. I still get a smile on my face when I sit back and think, Oh, this is our hard work — we put this together and now it’s really working out for us.”

Are there any unexpected challenges of retiring early?

“When you leave your full time job, you leave behind a lot of social interaction,” says Justin. Plus, “work keeps you busy, so you’re not sitting around at home thinking, how do I fill my days?”

“I think the social aspect is an area that people sort of overlook when they’re going into regular retirement or early retirement. How are they going to get out and meet people? How are they going to stay busy and stay active? And I think a lot of the answer to that is to do what interests you and find people who have similar interests in these activities that you do.”

How can other people do what you did?

“I think it’s really comes down to how much can you save and getting your savings rate as high as you can,” says Justin. “I’m not saying sacrifice your quality of life so that you’re suffering and not enjoying life, but be very intentional about your choices,” especially when it comes to “the big three,” housing, food and transportation.

The sooner you start putting your money to work, the more attainable early retirement becomes: “Start early. If you can start in your 20s, perfect. Even if you aren’t able to hit retirement in your 30s, if you start saving in your 20s, you have a much, much better chance of being able to retire in your 50s.”