Can this carbon capture technology save us from climate change?

London – It’s a stark prognosis: To save the world from the worst effects of climate change, it’s likely not enough to cut carbon dioxide emissions; we need to start scrubbing carbon pollution from the atmosphere, too.

And not just a little bit of carbon. Vast amounts of it.

The problem is, the jury is still out on whether that’s even possible.

Last month, a report from the global authority on climate science, the Intergovernmental Panel on Climate Change (IPCC), warned of the catastrophic consequences likely to result if humans cause global temperatures to rise more than 1.5 degrees Celsius above pre-industrial levels. The group also said that if we want to stay below the 1.5 degree limit, we’ll need to use technologies that remove carbon dioxide (CO2) from the air.

But the report noted that carbon removal at the scale that’s likely required is “unproven and reliance on such technology is a major risk in the ability to limit warming to 1.5°C.” In other words, don’t solely bank on an unproven technology when your future is on the line. 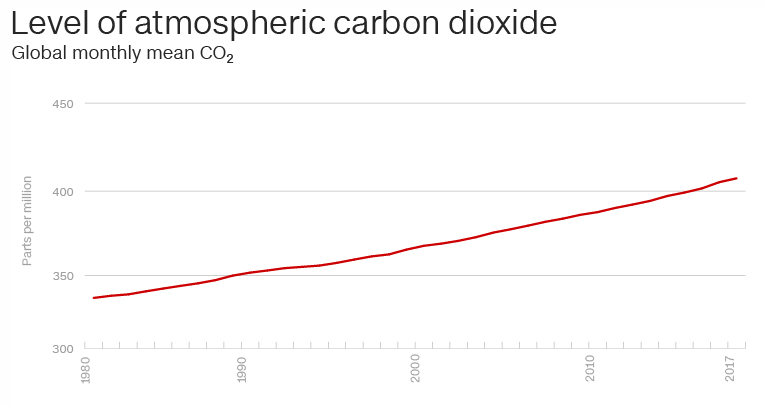 Burning fuel to clean the air

Just how much CO2 we need to pull from the air depends on how much of that heat-trapping gas we keep pumping into the atmosphere.

If we fail to make dramatic cuts — which is how things stand with current global emissions pledges — by the end of the century we might need to remove a total of around 30 times the CO2 that the world currently emits each year, according to the IPCC report.

There are many methods we might use to remove CO2 from the air, from the low-tech — simply planting more trees — to the speculative — adding iron to the oceans to speed the uptake of atmospheric CO2 by microscopic plant life.

But one method that’s got a lot of attention from IPCC scientists is known as Bioenergy with Carbon Capture and Storage, or BECCS. Essentially, it means growing bioenergy crops and then burning them at power stations to create energy, while capturing the CO2 that’s emitted.

When the bioenergy crops grow, they absorb carbon dioxide from the atmosphere. As long as the CO2 captured when they are burned is safely stored, the process is considered carbon negative. 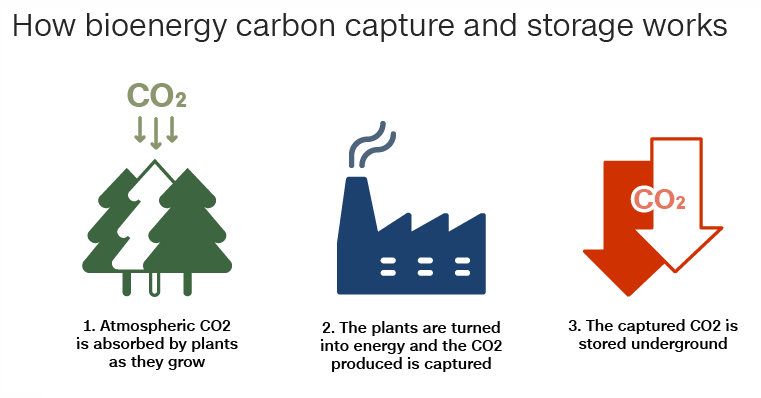 Of course, it’s not quite that simple. Growing, collecting, transporting and processing the crops will have a carbon footprint, but advocates believe that if the process is well managed, BECCS can be an important tool in removing atmospheric CO2.

Along with tree planting, BECCS is the CO2 removal method most used by the IPCC in its scenarios for limiting global warming.

Niall MacDowell, who leads the Clean Fossil and Bioenergy Research Group at Imperial College, London, says: “BECCS tends to come out as the preferred technology in many of the scenarios because in addition to removing CO2 from the atmosphere, it also generates power and is therefore a more cost-effective way to deliver these negative emissions.”

The problem with BECCS

Inevitably, BECCS has its drawbacks.

As well as the difficulties in ensuring the bioenergy is carbon neutral, there is the problem of carbon capture.

“There are very few examples of carbon capture and storage at large-scale power generating facilities that have come in on cost and work as expected,” says Glen Peters, research director at the Center for International Climate Research, in Norway.

“Large-scale” is the key adjective here for carbon capture, but even more so for bioenergy.

In some emission scenarios, a land area bigger than India would be needed to grow the required bioenergy crops.

That land might otherwise be used for forestry or to produce the food needed by a growing global population. Then there’s the question of how much water is needed, and how much carbon is released by converting land for growing bioenergy crops.

But MacDowell has studied the potential for BECCS to be rolled out at scale and believes it is possible, in theory at least.

“My research indicates it can work but you have to be very careful to do it the right way,” he says.

“If one were not careful to astutely manage and optimize the entire supply chain, starting from land that’s used for production of biomass right the way across the supply chain to harvesting and processing and final conversion to an energy product and effective sequestration of the CO2, then it might not work.”

So is BECCS a dead end? A dangerous distraction from the crucial business of cutting emissions? Some argue exactly that. Others see huge potential.

There are some small BECCS projects already running, but this month, a facility in the north of England is set to become the first power station in the world to start piloting the technology.

Drax power station provides about 6% of the UK power supply. When it opened in the 1970s it burned only coal but these days, four of its six generators are powered solely by biomass. 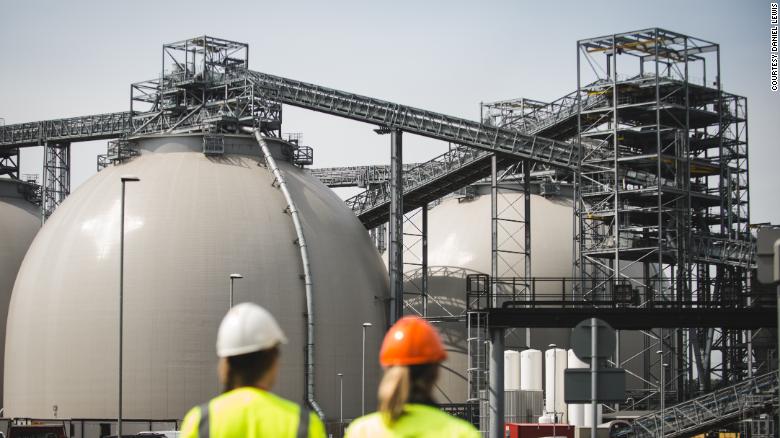 It claims that by using sustainably sourced biomass from managed forests in the United States, it saves at least 80% of the CO2 it would have emitted by burning coal (the missing 20% is down to supply chain emissions).

Remember, burning biomass still emits CO2 (actually, slightly more than coal, per unit of energy produced), but if Drax can capture that and either reuse or store it, then in theory, the process becomes carbon negative. Power generation that actually removes atmospheric CO2.

Drax is working with a local company called C-Capture, which has developed a chemical to trap the CO2 from its biomass flue gases. The technology has been tested in the lab and the plan is to trial it at the power station.

If Drax were to scale up the technology, Koss says a pipeline could be built to deliver the CO2 to disused North Sea oil or gas fields or aquifers, for long-term sequestration. 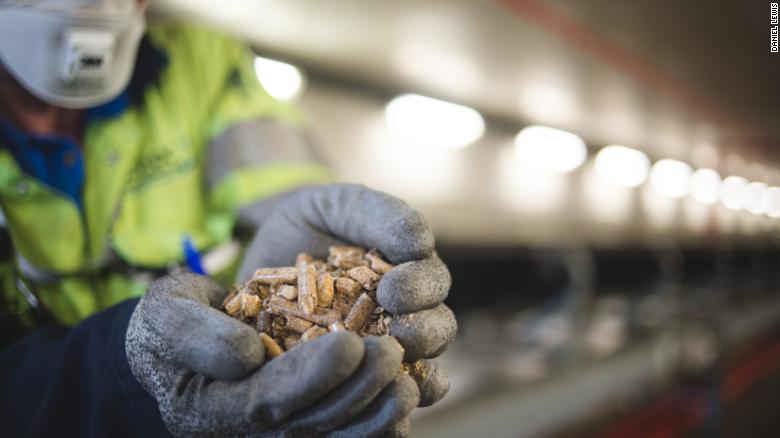 The biomass pellets used at Drax

If other power stations and heavy industries in the region were to also implement carbon capture, Koss says they could hook up to the same pipeline, driving down costs.

But experts say that at the moment there’s little economic incentive for large BECCS projects, and that governments should be providing more support.

Koss sees scope for some large-scale BECCS deployment around the world, but acknowledges there are limits to the amount of sustainable biomass that can be produced.

If BECCS has a role to play in carbon removal, it will need to be alongside other methods.

“The least helpful thing we can do at the moment is get captured by some sort of hype cycle where we get overly excited by one technology,” says MacDowell.

When it comes to fighting climate change, experts say the priority must still be to reduce emissions immediately.

Peters warns of the dangers of us cutting emissions too slowly, in the hope that an unproven technology will one day make up for our inaction.

“The IPCC scenarios (for reducing emissions) are based on the assumption that we have large-scale negative emissions,” he says. “The risk there is that we’re choosing a pathway today that depends on us having this technology in the future — if we don’t have this technology, future generations will pay the consequences.”

PrevPreviousPressure BioSciences’ Ultra Shear Technology system may solve the cannabinoid delivery issue
NextRetired and Loving It? The Differences Between Happy and Unhappy RetireesNext