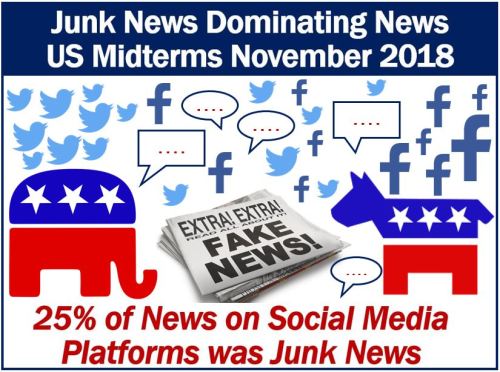 Junk news is dominating coverage of US midterms on social media, a new study has found. One-quarter (25%) of news content people shared around US midterms has been junk. In spite of efforts by social media platforms to address the problem, junk news still dominates.

The problem of junk news on Facebook and Twitter has increased in the lead-up to the US midterm elections. This is what researchers at Oxford University’s Oxford Internet Institute have found. The US electorate votes on November 6th, 2018.

Junk news as a proportion of all news

“The proportion of junk news in circulation has grown by 5 percentage points since the 2016 presidential elections. We’re a little surprised by this finding.”

“Facebook and Twitter have put some effort into trying to improve the quality of political news and information shared on the platforms, but it is not clear that their efforts are working.”

Phil Howard, a Professor of Internet Studies, is the Director of the Oxford Internet Institute. He is also lead researcher on Oxford’s Computational Propaganda project.

Junk has for the first time overtaken mainstream professional news content, according to recent studies of junk news. These studies have looked at elections worldwide.

Social media companies say they have taken measures to address the problem on their platforms. In spite of their initiatives, junk news is spreading to new communities, the researchers found.

“In 2016, junk news was concentrated among President Trump’s support base and the far-right. Today, junk news content is also being shared by more mainstream conservatives, reaching wider audiences than ever before.”

“The type of rhetoric and content that used to be characteristic of a niche media ecosystem serving primarily hard-right audiences has trickled down to the mainstream.”

Marchal is a doctoral (DPhil) student at the Oxford Internet Institute.

Who is to blame?

Domestic alternative outlets, rather than external actors, are dominating the political debate on social media in the US.

“What we are seeing is home-grown conspiracy theories and falsehoods. The problem now reaches far beyond foreign influence campaigns and extremist fringe voices. Junk news has been domesticated, and social media users have an appetite.”

Neudert is a part-time doctoral (DPhil) student at the Oxford Internet Institute.

The Computational Propaganda Project has created the Junk News Aggregator for discerning voters. Specifically, voters who want to examine the junk news problem in real time.

“This is a novel tool for studying junk news on Facebook as it happens.”

Liotsiou is a researcher on the Computational Propaganda project at the Oxford Internet Institute. She created the Junk News Aggregator.

The Aggregator, which the researchers describe as ‘user-friendly,’ makes visible the content and quantity of junk news. It also allows us to determine levels of engagement.

Users can search keywords, such as candidates’ names or where they live to reveal what people are sharing. The Aggregator provides real-time data as well as historical data that is up to one month old.

“We want to shed light on the problem of junk news and help improve the public’s media literacy. We hope to make this issue more transparent to voters, policy-makers, and tech companies.”

The researchers gathered and examined data from 2.5 million tweets and almost 7,000 Facebook pages. Their 30-day study ended on 31st October 2018.

According to a University of Oxford press release:

“Junk news was classified as sources publishing deliberately misleading, deceptive or incorrect information, typically in an ideologically extreme, hyper-partisan or conspiratorial fashion, and meeting a variety of criteria related to professionalism, style, credibility, bias, and counterfeiting.”