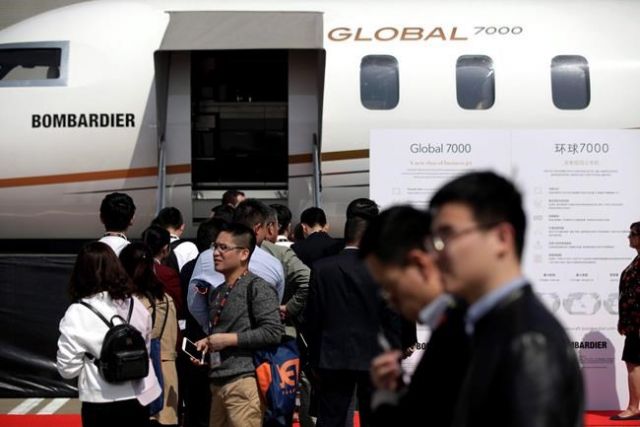 The Global 7500 will enter into service later this year, Transport Canada said in a release Friday.

The thumbs-up marks a key milestone in the transportation giant’s turnaround plan after it sold a majority share of its C Series commercial jet program to Airbus in July, said AltaCorp Capital analyst Chris Murray.

The new business jet — now the largest and longest-range business jet on the market, according to Transport Canada — is sold out through 2021, Murray noted, though Bombardier has not revealed the number of orders.

Murray forecast a small number of deliveries in 2018 before production ramps up through 2020.

The Global 7500, along with the new Global 5500 and 6500, comes partly as a response to products from rival business jet manufacturer Gulfstream Aerospace as demand for the jetliners gains elevation, said Cormark Securities analyst David Tyerman.

“The market environment has been improving, but it’s coming off of a lower base. It hasn’t been that strong for many, many years,” Tyerman said in an interview.

“It potentially can be quite profitable for Bombardier. The high-end models tend to have higher margins.”

The Montreal-based company is aiming for US$8.5 billion in annual revenues by 2020 driven largely by Global 7500 sales, a major bump from last year’s US$5 billion, said RBC Dominion Securities analyst Walter Spracklin.

The certification came the same day Bombardier announced that HK Bellawings Jet Ltd. has firmed up an order for two Global 7500 and four Global 6500 business jets. The deal with the Hong Kong aircraft management company is valued at about US$370 million, Bombardier said.

The new aircraft — originally dubbed the Global 7000 — has a capacity of 19 passengers and a range of more than 14,000 kilometres, long enough to link destinations such as Toronto and Hong Kong.

“The certification of the Bombardier Global 7500 aircraft is a significant accomplishment that will create good quality jobs for Canadians and support the continued growth of the local and regional economies where these aircraft are built,” Garneau said.