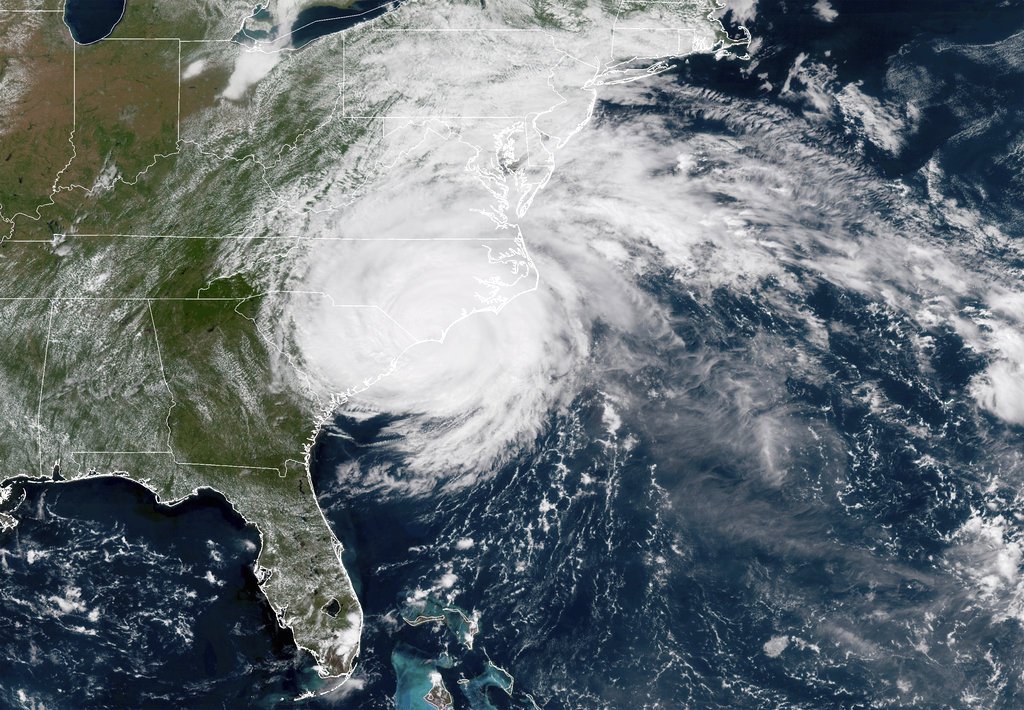 Their storm surges are more destructive because climate change has already made the seas rise. And lately, the storms seem to be stalling more often and thus dumping more rain.

Study after study shows that climate change in general makes hurricanes worse. But determining the role of global warming in a specific storm such as Hurricane Florence or Typhoon Mangkhut is not so simple — at least not without detailed statistical and computer analyses.

The Associated Press consulted with 17 meteorologists and scientists who study climate change, hurricanes or both. A few experts remain cautious about attributing global warming to a single event, but most of the scientists clearly see the hand of humans in Florence.

Global warming didn’t cause Florence, they say. But it makes the system a bigger danger.

“Florence is yet another poster child for the human-supercharged storms that are becoming more common and destructive as the planet warms,” said Jonathan Overpeck, dean of the environment school at University of Michigan. He said the risk extends beyond the Atlantic Ocean, such as Typhoon Mangkhut, which hit the Philippines on Friday.

For years, when asked about climate change and specific weather events, scientists would refrain from drawing clear connections. But over the past few years, the new field of attribution studies has allowed researchers to use statistics and computer models to try to calculate how events would be different in a world without human-caused climate change.

“It’s a bit like a plot line out of ‘Back to the Future,’ where you travel back in time to some alternate reality” that is plausible but without humans changing the climate, said University of Exeter climate scientist Peter Stott, one of the pioneers of the field.

A National Academy of Sciences report finds these studies generally credible. One team of scientists tried to do a similar analysis for Florence, but outside experts were wary because it was based on forecasts, not observations, and did not use enough computer simulations.

As the world warms and science advances, scientists get more specific, even without attribution studies. They cite basic physics, the most recent research about storms and past studies and put them together for something like Florence.

“I think we can say that the storm is stronger, wetter and more impactful from a coastal flooding standpoint than it would have been BECAUSE of human-caused warming,” Pennsylvania State University climate scientist Michael Mann wrote in an email. “And we don’t need an attribution study to tell us that in my view. We just need the laws of thermodynamics.”

“We have solid data across decades of rainfall records to nail the attribution — climate change is increasing the frequency of extreme rainfall events,” Cobb said.

For every degree the air warms, it can hold nearly 4 percent more water (7 percent per degree Celsius) and offer measurably more energy to goose the storm, scientists said.

“The amount of water that comes out of hurricanes is certainly the most robust connection that we have,” National Oceanic and Atmospheric Administration climate scientist Jim Kossin said.

And to look at Florence specifically, “it’s very likely that climate change has warmed the ocean such that the hurricane’s intense rainfall is more destructive than without global warming,” said Weather Underground Meteorology Director Jeff Masters, a former hurricane hunter.

A Kossin study this year showed that tropical cyclones — a category that includes hurricanes and typhoons — are moving slower and even stalling. Kossin said “it’s happening a lot more than it used to.” Several studies agree that climate change is to blame but differ slightly in their conclusions.

With the emergence of Florence, some place in the U.S. has been drenched because of a stalled hurricane for four years in a row, storm surge expert Hal Needham said.

Kossin and Overpeck also pointed to studies that show storms are intensifying more rapidly than they used to.

Just like in Superstorm Sandy, scientists said it is clear that hurricane storm surge is worsened by sea level rise because the power of 6 to 10 feet of water comes on top of seas that were considerably lower decades ago. An extra 8 inches or so can mean the difference between staying dry or getting damaged, Masters said.

In the Carolinas, natural and temporary climate factors added to the “march upwards” from global warning. Because of that, the seas have risen nearly 5 inches in five years, said Andrea Dutton of the University of Florida.

Meteorologist Ryan Maue of weathermodels.com cautioned that observers should “stick to overall trends around the world and not individual cases.”

University of Miami hurricane expert Brian McNoldy said there are too many ever-changing factors that make it hard to blame climate change specifically.

“If you are trying to make climate policy,” Maue said Friday, “you don’t want to make it on a storm-by-storm basis.”