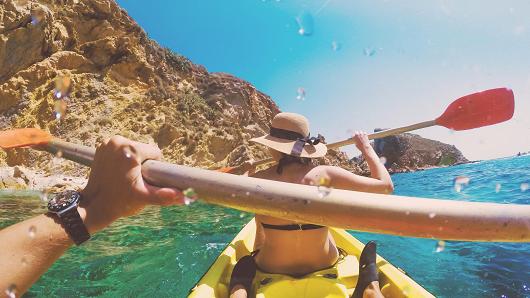 With the kids out of school and long days of warm weather beckoning, taking a vacation might be on the minds of many.

In fact, a record-breaking 46.9 million people are planning to travel at least 50 miles away from home this July 4 for Independence Day, according to AAA. That’s up 5 percent from a year ago and the highest it’s been in the 18 years the group has been tracking travel for that holiday.

If you count yourself among the would-be vacationers — whether for the Fourth of July or later — and haven’t saved any money for your getaway, there’s a good chance you’ll be trading those days of freedom for future pain. Even if you’ve set money aside, it can be easy to overspend on a vacation if you don’t do some advance legwork.

“If you plan to travel, you should have a plan to travel. It’s that simple,” said Alexander Joyce, president and CEO of ReJoyce Financial in Carmel, Indiana.

“Take your time and really give thought to what you can afford,” Joyce said. “If you look at it emotionally, it will become a need instead of a want.”

In addition to booking your trip early to avoid potentially higher prices for flights and hotels, there are three important things to do so your vacation won’t derail your overall financial picture.

Joyce said he has seen people in their 30s or 40s who withdraw money from their 401(k) account or IRA to pay for a vacation.

What they often don’t realize is that not only will they pay taxes on that withdrawal, they also are subject to a 10 percent early withdrawal penalty.

“Sometimes even if they know it, they ignore it because they want the money for vacation,” Joyce said.

On top of the tax implications, taking money early from a retirement account essentially is robbing from your future.

So what you actually robbed from your retirement is that larger number.

Joyce has a client who is taking her son to Europe due to a promise made when he was younger. As a single, working mom who lives paycheck to paycheck, she’s putting the entire trip on a credit card.

Average credit card rates today hover around 17 percent. Say the trip is costing $5,000. If she could find $150 a month to pay toward that balance, it would take more than 15 years to pay off, and she’d end up paying more than $4,200 in interest.

That would mean her trip is costing $9,200 instead of the $5,000 initially charged on her credit card.

“Ask yourself what you can truly afford. You have to be disciplined,” Joyce said. “If you can’t afford to go to a certain place, don’t go now. You can plan for it to happen later.”

Joyce encourages clients to set aside money each month for travel. When you know how much money you have to work with, planning a trip becomes easier.

Also look at the real costs you’ll encounter where you go. For instance, if you think you’ll want to go on excursions or take scuba diving lessons, look into the cost in advance and budget for it. Also be realistic about how much you’ll spend on food and incidentals.

While vacations can deliver a sense of escaping from real life, it’s an attitude than can cause people to abandon financial sense.

This disconnect shows up in the form of all those charges you put on your credit card during your trip.

“If you bring the credit card with you, you’ll use it,” Joyce said.

It goes back to having a vacation budget.

“If you have the discipline to say we only have a certain amount to spend, you can leave the credit card at home,” Joyce said. “That way you don’t spend $3,000 on a trip that you had only budgeted $1,200 for.”