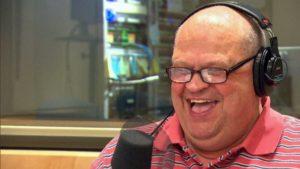 His career has spanned nearly a half century, and his name has become synonymous with political reporting in Quebec.

But, as those who worked alongside Bernard St-Laurent during his years on air and in print can attest, his encyclopedic knowledge of Quebec politics is trumped only by his dedication to the craft and his mentorship of the next generation.

“Bernie made it come alive for me,” said Nancy Wood, host of CBC Montreal News at 11, who first met St-Laurent when she was a 22-year-old Montreal Gazette reporter assigned to Quebec’s National Assembly.

“Bernie made me realize that politics was a blast: it was exciting. It was competitive. It was ruthless…. He was such a mentor to the younger reporters like me who were coming along, to show us how it was really working — what was going on behind the scenes.”

The longtime CBC broadcaster was one of three recipients of the award, handed out at a ceremony in Toronto.

“It’s an incredible honour. I am very proud to be recognized,” St-Laurent said.

“I’m grateful to all of the colleagues, editors, producers and news directors who went out of their way to help me become a better journalist and storyteller over the years.”

St-Laurent retired from the CBC in 2015, but he returned last year as a weekly political columnist on CBC Montreal’s Daybreak.

The great-nephew of a prime minister, St-Laurent discovered his passion for the rough-and-tumble world of Quebec politics at a young age. He started his journalism career as a cub reporter at the Sherbrooke Record in 1969.

He co-founded a weekly newspaper, The Gaspé Spec, then became Standard Broadcasting’s first full-time reporter at the National Assembly for Montreal’s CJAD.

St-Laurent first joined CBC in 1981, opening the English-language service’s first bureau in the Eastern Townships and working as a National Assembly reporter. He left the national broadcaster to help launch the Montreal Daily News before returning to CBC in 1990.

He went on to become a national reporter, assignment editor, producer and host of Radio Noon, Homerun and C’est la Vie.

His decades in the industry left its mark on Quebec politics and on his audience.

“He’s there to explain. He’s the gentle professor,” said Jean-François Lisée, leader of the Parti Québécois.

St-Laurent was a fixture on political campaign buses and in the halls of the National Assembly for decades. He covered every major political event in Quebec from the time René Lévesque’s first PQ government was elected.

In addition to his weekly column, St-Laurent now works as a volunteer and mentor with the Recovery Transition Program at the McGill University Health Centre.

St-Laurent said he’s been lucky to have had some stellar mentors throughout his career and urged his peers in the industry to take on that role and guide the next generation.

“Journalism plays a vital role in democracy,” he said. “My advice to young journalists is: keep the standards high. Don’t give up. We need you more than ever.”

See what politicians and St-Laurent’s colleagues had to say about his decades in the business: