According to SAAQ, there were 22,442 electric cars on Quebec roads as of March

Driving to the gym and then to work daily, Roberta Ralston says her commute clocks in around 80 kilometres per day.

Faced with an aging car and teenage sons who no longer need carpooling around, Ralston is in the market for a new vehicle. She says it’s going to be electric.

“Most of the time it’s me, just one person, in the car, so why not look at electric,” she told CBC News.

Ralston isn’t an anomaly. She’s just one of many Quebecers who are deciding to swap the gas station for the charging station.

According to the SAAQ, Quebec’s automobile insurance board, there were 22,442 electric cars on Quebec roads as of March. That number continues to grow each month.

“Every year, we see an increase in sales of about 10 to 15 per cent,” said Frédéric Racine, the vice-president of Cadillac Chevrolet Île-Perrot.

“Today, the technology is there. The cars are super reliable.” 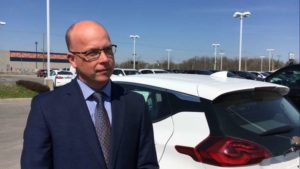 Just as the price of gas affects gas-powered car sales, so does it impact the sale of electric cars — albeit in an opposite manner.

“One of the factors that also makes a difference, whether we like it or not, is the price of gas,” says Racine.

“As the price of gas goes up, we see the interest increasing as well.”

For Ralston, calculating the yearly cost of gas helped in her decision.

“So with the increased gas prices, that’s only going to go up more.”

She estimates her annual cost of charging an electric vehicle would be around $450.