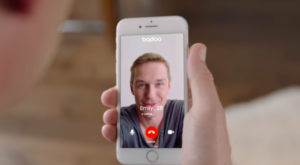 European dating giant Badoo has added a live video chat feature to its apps, giving users the chance to talk face-to-face with matches from the comfort of their own home — and even before agreeing to go out on a first date.

It’s claiming it’s the first dating app service to add a live video feature, though clearly major players in the space were not holding back because of the complexity of the technical challenge involved.

Rather live video in a dating app context raises some immediate risk flags, including around inappropriate behavior which could put off users.

And for examples on that front you only need recall the kind of content that veteran Internet service Chatroulette was famed for serving straight up — if you were brave enough to play.

(“I pressed ‘play’ last night at around 3:00 am PST and after about 45 clicks on ‘Next’ encountered 5 straight up penis shots,” began TechCrunch’s former co-editor Alexia Tsotsis’ 2010 account of testing the service — which deploys live video chat without any kind of contextual wrapper, dating or otherwise. Clearly Badoo will be hoping to achieve a much better ratio of quality conversation to animated phalli.)

But even beyond the risk of moving dick pics, video chatting with strangers can just be straight up awkward for people to jump into — perhaps especially in a dating context, where singles are trying to make a good impression and won’t want to risk coming across badly if it means they lose out on a potential date.

Sending an opening text to a dating match from a cold start can be tricky enough, without ramping up the pressure to impress by making ‘breaking the ice’ into a video call.

So while dating apps have been playing around with video for a while now it’s mostly been in the style of the Snapchat Stories format — letting users augment their profiles with a bit of richer media storytelling, without the content and confidence risks associated with unmoderated live video. And it’s a big step from curated and controlled video to the freeform risk and rush of live video.

Regardless, Badoo is diving in — so full marks for taking the plunge.

The feature has been introduced with some prudent limits too though. Badoo says video chat will only be switched on once both parties have matched and exchanged at least one message each.

And on the inappropriate content front, it has this guidance: “If a user is not what you expected, you can easily block or report that person so they will no longer be able to contact you again.” So basically if you get flashed, you can block and report the flasher.

To start a video chat with a match they’ve messaged with a user taps the icon in the top right corner of the chat screen — then they have to wait (and hope) for their call to be accepted.

While there are risks here, there is the potential for the feature to be really useful in an online dating context — if enough users can get over the confidence bump to use it.

Video chats could help to solve the core problem for online daters of how to know whether there’s any chemistry with a match before you actually meet them. Because while two people can aesthetically appreciate each other’s Instagram portraits from afar, and even like the cut of each other’s textual jib remotely, they still can’t know for sure ahead of time whether there’s any chemistry until they meet. And by then it’s too late — hence all those awkward first date stories.

Live video chatting isn’t as informative as meeting in person, of course, but it’s the next best thing technology can deliver for now — hence Badoo couching the feature as a way to “audition your date” before you meet. Though that phrasing does risk amping up the pressure.

The company also says live video can help enhance dating app safety — saying the feature can be a way for users to suss out a stranger to see whether seem trustworthy before risking meeting in person, and also help to weed out fake profiles and catfishing attempts — arguing: “It’s a safe way to have clarity on exactly who you’re talking to.”

So it may help to figure out if that stunner you matched with really is a Russian model wanting to date you or some Kremlin-backed scammer. (Though Badoo does already have some features aimed at thwarting catfishing, such as a request a selfie feature and a photo verification option; and, well, fake Russian models are unlikely to ever pick up your incoming call — unless it’s a very sophisticated scam indeed. Or, well, you’re actually talking to a professional dating service who your match has paid to carry out their dating ‘grunt work’ — in which case they’ll make you schedule in a live video hours or days in advance.)

On the flip side, live video chatting will inevitably be more daunting for less confident singles to use, so certain users may end up feeling disadvantaged and/or falling to the back of the dating queue vs more extroverted types who relish the opportunity to express themselves in the moment and in front of a lens.

Or it could just end up being a feature that attracts only a subset of likeminded users and the rest carry on as normal.

Now that Facebook has decided to take inspiration from Bang With Friends and directly cater to date-seekers inside its walled garden — announcing a forthcoming matchmaking service at its f8 conference yesterday — it’s clear that dedicated dating/matchmaking services like Badoo are going to have to up their game to stave off the competitive threat. So offering richer feature sets to further engage their communities of singles is going to be important.

Facebook’s dating foray has been given the unfortunate name of ‘FaceDate’ but will nonetheless benefit from the massive leg over of Facebook’s gigantic reach combined with the gravitational network pull of it owning and operating multiple popular social services.

The company also has oodles of data — thanks to its pervasive snooping on people’s online activities — so if you buy into the theory that love can be algorithmically reverse engineered then Facebook certainly has enough data-points to play at being Emma.

It does not yet have the direct community of daters though — so it’s coming from behind in that sense. And young users have been less engaged on Facebook itself for a while — preferring other social apps like Instagram, for example.

Even so, dating apps like Badoo can’t afford to get complacent and will need to work hard to keep their communities engaged — or risk Facebook spinning up another gravitational blackhole to suck out their USP. This is why investors punished Match’s stock yesterday.

Right now, Badoo has around 380M users, and names its best markets as Europe and South America. It also says it sees 300,000+ daily sign-ups, along with 60 million swipes and six million matches each day — running a live tracker of usage here. It’ll be hoping the new live video feature keeps those numbers tracking up.