Everything you need to know about the 6-inch OnePlus 5T

The OnePlus 5T is one of our favorite phones of the last year, and a worthy update to the OnePlus 5, the phone which it succeeded. Buy it and you get a more contemporary look, flagship specification, and a great camera — all at a reasonable price.

Here’s everything you need to know about the all-new OnePlus 5T, and you can check out our OnePlus 5T review for more.

At launch, the OnePlus 5T was available in countries all over the world, including the U.S, Canada, France, Spain, Germany, U.K., China, and Hong Kong. Now, however, it looks like it might be totally out of stock in North America — so if you live in the U.S. and wanted to get the phone for yourself, you’re out of luck. The news was first broken by Engadget, and the report noted that OnePlus confirmed that no more OnePlus 5T models would be sold in the U.S.

It’s still available for 500 euros in Europe, or 450 British pounds in the U.K. That’s still a lot of money considering the low price of the original OnePlus One, but you’re getting performance and specifications that match most $650+ flagship smartphones.

Pay 500 British pounds and you get a slightly higher specifcation OnePlus 5T with 8GB of RAM and 128GB of storage space. The phone doesn’t have a MicroSD card slot, so this is the only way to get extra storage on the device.

OnePlus loves special editions. We’ve had different colors, collaborations with artists, and even an exciting Star Wars-branded OnePlus 5T. Most recently OnePlus has released the now sold-out sandstone white limited edition, and has now also added a beautiful lava red model to the range. First seen in China last year, the lava red OnePlus 5T is now for sale in the United States and the United Kingdom, just in time for Valentine’s Day. 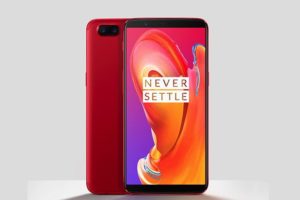 The first thing you’ll notice about the OnePlus 5T is its design. The back of the phone looks incredibly similar to the original OnePlus 5, with a dual-sensor camera on the top left-hand corner accompanied by a small flash. One of the biggest changes is how the fingerprint sensor is on the rear, instead of the front like previous OnePlus phones. The reason? We’ll have to turn the around for the answer. 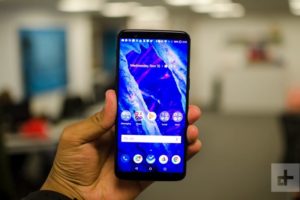 The biggest difference between the OnePlus 5 and the OnePlus 5T is the screen. You now have a 6.01-inch AMOLED screen over a 5.5-inch one. The phone’s body is still very similar to the OnePlus 5, and that’s because the company has dramatically slimmed down the top and bottom edges around the screen. This “bezel-less” design is a major smartphone trend this year, and you can see it in phones like the LG G6 and the iPhone X. According to OnePlus, the display offers a hefty 80.5 percent screen-to-body ratio — which puts it a step ahead of the LG G6 as you’ll find in our bezel-less phone comparison.

The selfie camera on the phone now also can help you unlock the phone by scanning your face. It’s not secure like the iPhone X’s Face ID, but it’s meant for convenience.

As is the case with all OnePlus phones, you’ll find staggeringly impressive specifications here for the price. Like the OnePlus 5, the OnePlus 5T is powered by Qualcomm’s Snapdragon 835 processor, and you get the same options for either 6GB or 8GB of RAM. That much RAM isn’t really necessary for a phone, but if anything it helps future-proof the device for any future technologies that require a lot of memory. Those RAM options are accompanied by either 64GB or 128GB of storage, and you’ll want to get the amount of storage you want, because there’s no MicroSD card slot (though there are dual-SIM slots).

When it comes to software, the OnePlus 5T runs OxygenOS 4.7, which is based on Android 7.1.1 Nougat. It’s last year’s version of Android, but thankfully the company is planning an update to bring the phone to Android 8.0 Oreo. A beta will be available before the end of the year, and the official roll out will take place in the first quarter of 2018.

The battery is the same as the regular OnePlus 5, with a 3,300mAh capacity, and you’ll still be able to charge it up quickly with OnePlus’ proprietary Dash Charge technology. OnePlus claims a half-hour charge can give the 5T enough power for a day. 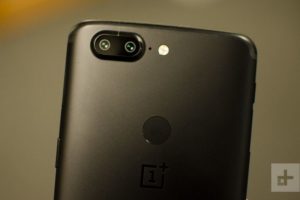 The camera on the phone is similar, but quite different from the OnePlus 5. You still have two dual lenses on the rear, but gone is the telephoto lens. Instead, it’s replaced with a 20-megapixel lens with a much wider f/1.7 aperture. It’s intended to improve low-light photography. It’s still used to capture depth for Portrait Mode, but photos won’t be as cropped as before, and it relies a little more on software. You also won’t be able to get a 2x optical zoom, even though the 2x option is still present on the camera, due to inferior digital zoom.

The main camera is the same 16-megapixel lens with an f/1.7 aperture. As far as video goes, the phone is able to handle 4K recording at up to 30 frames per second, and you can shoot slow-motion video at 120 frames per second in 720p. The front-facing camera is rated at 16 megapixels. We’ll have to wait and see how these cameras perform in real-world tests, but at least on paper they seem quite capable, and we liked the OnePlus 5‘s camera a lot.

Like the OnePlus 5 and other Android smartphones, the OnePlus 5T is unable to stream Netflix in HD. This limitation is not due to a hardware issue, but a DRM issue with the phone, according to a report on Android Police.