Macy’s Has a Plan to Fend Off Amazon

Arguably, no retailer has more to lose from the rise of Amazon (NASDAQ: AMZN) than Macy’s (NYSE: M). The venerable department store chain was a giant of retail throughout the 20th century, with flagship stores in many of the country’s biggest cities, but the rise of e-commerce has threatened Macy’s like nothing before it.

As a department store chain, the company’s format is the most vulnerable to the online channel because the model doesn’t offer any of the private labels or personalization that might help separate it from online competitors. Once upon a time, if you wanted to shop for clothing, cosmetics, home goods, and gifts in the same place, a department store was ideal, but now consumers can buy all those things from the comfort of their own homes. As a result of that pressure, Macy’s stock dropped more than two-thirds from 2015 to 2017. It’s since recovered some of those losses after posting its first positive comparable sales growth in three years in the recent quarter. However, the headwinds against the company remain.

At the recent Shoptalk retail conference in Las Vegas, Macy’s unveiled a plan to modernize its business. Here are some of the key components. 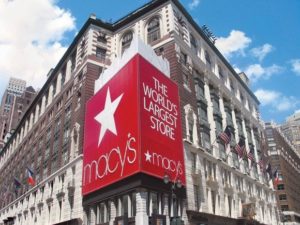 If you’ve been to a Macy’s or another department store, you’ve likely experienced this frustration. You’ve found an item that you want to buy, yet a cash register is nowhere in sight. When you finally find one, there’s a long line to pay for your merchandise.

To combat that, Macy’s is testing mobile checkout at some stores with plans to introduce it to 450-650 locations. In order to use it, a customer must download the Macy’s app, scan items on it, pay, and then go to an express line at checkout to have the security tags removed. CEO Jeff Gennette called the checkout process “the single biggest pain point in our stores right now.” However, the unwieldiness of the mobile checkout process, which still requires customers to visit a checkout counter, underscores the challenges facing Macy’s. Compare that to Amazon’s “Just Walk Out” technology in its new Amazon Go store, and it’s clear which one is more convenient.

Another way Macy’s is embracing technology is with a pilot program to offer virtual reality furniture shopping experiences. The initiative differs from rivals like Ikea, Amazon, and Target that are offering augmented reality to show customers how furniture would look in their homes. At Macy’s, the program gives customers a virtual reality headset to see how a furniture set would look together. The company says the VR initative helps it better use its space since it doesn’t have to devote as much room to furniture that it can display virtually, and the technology has helped boost sales by easing concerns about furniture not fitting. At the conference, Gennette said, “Furniture is a business we love. It’s high margin. It’s a high-touch business for Macy’s. We want to do this with as many stores as possible.”

Jumping on a broader trend throughout retail, Macy’s said it would step up its private-label offerings, growing the percentage of private-label inventory from 29% to 40% of its total merchandise. Private-label goods help differentiate retailers from rivals and protect it from the online channel, where brands like Calvin Klein or Michael Kors are widely available. Similarly, Backstage, Macy’s off-price concept that is often located within its department stores, has had a positive effect, lifting sales by seven percentage points compared to stores that don’t have it. Backstage also helps defend Macy’s from off-price competitors like TJ Maxx.

The recent initiatives seem to be having a positive impact on the company’s performance, and investors should be encouraged by the increase in comparable sales in Macy’s most recent quarter. However, while the department store chain is modernizing its business, competitors are moving forward. Wayfair (NYSE: W), the online furniture seller, continues to take a larger share of the market every quarter; its sales jumped 46% in its most recent quarter to total $4.7 billion for 2017. Meanwhile, Amazon continues to make a push into apparel and furniture, and department store rivals like Kohl’s and Nordstrom have also put up strong growth recently.

Though Macy’s has closed dozens of stores recently, a number of locations are still attached to underperforming malls that are seeing declining traffic. Drawing customers to those stores will remain difficult.

Macy’s needs to take several steps to modernize the in-store experience. The ones above are a good start, but the company needs to keep introducing new measures to keep customers coming back to its stores. The competition isn’t standing still, and Macy’s mall-based locations put it at a disadvantage.