It would be fun to hear Warren Buffett, a noted ukulele player, strum and sing “My Way,” the old standard recorded by Frank Sinatra and Elvis. The legendary investor has certainly done things his way — and quite successfully. However, to paraphrase the song: Regrets, he’s had a few.

Buffett has pointed out three of his regrets. At Berkshire Hathaway’s (NYSE: BRK-A) (NYSE: BRK-B) annual shareholder meeting last year, he stated that he missed opportunities by not buying Google parent Alphabet (NASDAQ: GOOG) (NASDAQ: GOOGL) and Amazon.com (NASDAQ: AMZN) years ago. And in an interview with Yahoo! Finance last week, Buffett admitted that he made a mistake by not investing in JPMorgan Chase (NYSE: JPM).

Here’s what Buffett said about these stocks he now wishes he had bought — and whether they’re smart picks for ordinary investors now. 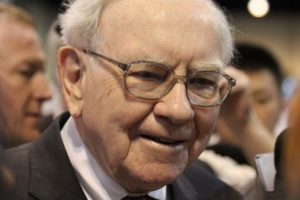 In 2017, Buffett told Berkshire Hathaway shareholders that he should have bought Google (later to roll up to a new umbrella company, Alphabet) a long time ago. He knew that Berkshire’s GEICO insurance business was paying $10 to $11 for each advertising click on the Google search engine.

Had Buffett bought shares of Google 10 years ago, he would now be sitting atop gains of well above 400%. By comparison, Berkshire Hathaway stock rose close to 140% during the same period.

Would Warren Buffett buy Alphabet now? He told CNBC in a May 2017 interview that “if forced to buy [Google parent Alphabet] or short it, I’d buy it.” Of course, Buffett isn’t under pressure to buy or short Alphabet stock. Berkshire still doesn’t own shares of the technology giant.

There’s no question that Alphabet meets several of the criteria that Buffett prefers in a stock. The company has been managed really well. It enjoys a solid moat for most of its products. And Alphabet has consistently generated strong earnings.

The problem for Buffett with Alphabet now, though, is that he thinks it has too much technological uncertainty. Buffett hasn’t jumped into tech stocks very often because he doesn’t like to invest in businesses that he doesn’t understand.

You can put internet giant Amazon in the same boat as Alphabet. Buffett acknowledges that he underestimated the internet giant. When asked by CNBC last year why he didn’t buy Amazon shares in the past, he responded with one word: “stupidity.”

Of course, Warren Buffett isn’t actually stupid. There was no way to know for sure how well Amazon would perform through the years. But the reality is that the stock has soared a staggering 2,200% over the last decade. That’s enough to make even a brilliant investor like Buffett feel at least a little dumb for not buying earlier.

Although Berkshire hasn’t added Amazon to its portfolio, Buffett said a few weeks ago that he “wouldn’t bet” against the stock. The oracle of Omaha has been very complimentary of Amazon CEO Jeff Bezos, telling CNBC that he is “amazed at the managerial talent” Bezos possesses.

Like Alphabet, Amazon has a great business model with lots of recurring revenue — just like Buffett loves. It also has a strong moat. Amazon’s revenue and earnings growth has been phenomenal as well.

There’s one thing about buying Amazon, though, that would probably be tough for Buffett to get past: its valuation. Amazon stock currently trades at 255 times trailing-12-month earnings and at 102 times expected earnings.

Only a few days ago, Buffett stated in an interview with Yahoo! Finance that he made a mistake by not buying a stake in JPMorgan Chase for Berkshire in the past. He has long been a fan of JPMorgan CEO Jamie Dimon, and he acknowledged that the stock was “very cheap” a few years ago.

However, Buffett added that he personally owns some shares of the financial services giant, one of only five or six stocks in his private portfolio. And, to be fair, Berkshire has been loaded down with several bank stocks that have performed pretty well in recent years. Still, with dividends reinvested, a position in JPMorgan Chase would have quadrupled over the last 10 years.

What about buying JPMorgan Chase now? Buffett didn’t hint at plans to do so. However, the stock is still priced at a relatively attractive valuation with shares trading at 18 times trailing-12-month earnings and less than 12 times expected earnings. The company continues to be managed well with Dimon at the helm.

You might think that Berkshire’s positions in other bank stocks could lower the likelihood that Buffett would want to buy JPMorgan. Not necessarily. Even though Buffett acknowledged Berkshire’s heavy weighting in banks, he still wishes that he had added JPMorgan Chase. After all, this is the same guy who once said: “Diversification is a protection against ignorance. It makes very little sense for those who know what they’re doing.”

I wrote recently that Berkshire should buy the stocks of Alphabet and JPMorgan Chase. (At the time, I had no idea that Buffett personally owned shares in JPMorgan.) That’s still my view. In fact, I think he should buy shares of Amazon as well.

All three of these companies are well positioned for long-term growth. I’m thankful that I bought shares of Alphabet and JPMorgan Chase in the past. Like Buffett, I’ve kicked myself for not buying Amazon.

Even if Buffett and Berkshire decide against buying stakes in Alphabet, Amazon, and JPMorgan Chase, that doesn’t mean that ordinary investors shouldn’t. I suspect you’ll have few regrets if you invest — and do it your way.