Why Does General Motors Want to Boost Production of the Chevy Bolt? 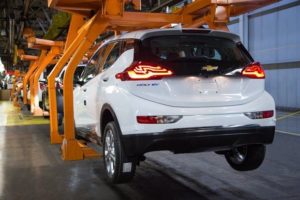 Clearly, GM thinks it can sell considerably more Bolts than it’s making right now. It’s a sign that GM will remain committed to its electric-vehicle plan even if the Trump administration chooses to loosen U.S. fuel economy standards, something Barra also confirmed.

But it’s not yet clear where those added Bolts will be sold. Here’s what we know.

Chevrolet Bolt EVs move down the assembly line at GM’s Orion Assembly Plant in Orion Township, Michigan. GM plans to boost production of the Bolt at the Orion factory later this year.

What Barra said: More Bolts are on the way

In prepared remarks at an energy conference in Houston on Wednesday, Barra said that GM will boost production of the Bolt at its Michigan factory later this year:

[B]ecause of increasing global demand for the Chevrolet Bolt EV, we are announcing today that we will increase Bolt EV production later this year at our Orion Assembly Plant north of Detroit. Our more than 100 years of manufacturing expertise gives us the flexibility to scale production to meet market demand.

Increased Bolt EV production benefits our customers around the world, our dealers and our employees, who are proud to build an affordable, ground-breaking vehicle that our customers love.

What will it mean to boost production of the Bolt? GM’s Orion Assembly Plant built 22,398 Bolts in 2017, according to figures from Automotive News. Nearly all of those (23,297) were sold in the United States. GM also built around 2,000 examples of the Opel Ampera-e, a rebadged Bolt, for its former German subsidiary Opel AG in 2017. (Opel AG is now owned by Peugeot SA (NASDAQOTH: PUGOY), but GM continues to build several Opel models under contract.)

Bolt sales increased steadily as 2017 went on, with GM making it available to dealers nationwide starting in June. But the pace of sales dropped sharply in January 2018.

The recent falloff in U.S. Bolt sales is probably not a sign of trouble for the Bolt. It’s likely due to the way GM has used incentives. Toward the end of 2017, GM began offering fairly generous incentives on 2017-model year Bolts. Most of those 2017 models were sold by the end of the year, and GM’s incentives on 2018 models are much more modest.

But while I don’t think that U.S. retail demand for the Bolt has really tailed off, I do think that until and unless GM revamps or upgrades the Bolt, U.S. retail sales are unlikely to rise much above the level we saw late last year.

So where will these added Bolts be sold?

The key word in what Barra said might be “global.” As I said above, I don’t think GM is anticipating a big increase in retail demand for the Bolt in the United States. It’s possible that GM plans to begin exporting Bolts from Michigan to other countries in South America or Asia.

It’s also possible that GM is anticipating large fleet orders for the Bolt, including from its own urban car-sharing subsidiary, Maven. There’s a related possibility: GM’s self-driving vehicle, called the GM Cruise, is a heavily modified Bolt. GM plans to begin producing it at Orion next year; it’s likely to build at least a few thousand in 2019.

What will it take to boost production of the Bolt?

It’s believed that GM initially scaled its assembly line and orders from suppliers to build the Bolt (and Ampera-e, and eventually the Cruise) at a pace of about 30,000 a year (or 2,500 a month), a pace it hit in the second half of 2017.

Increasing production of a vehicle can be expensive, if an automaker needs to purchase additional tooling or set up another complete assembly line. But GM should be able to boost production of the Bolt without making significant investments in new tooling: Orion Assembly is running on just one shift of workers right now, and the only other model built at the plant is the slow-selling Chevrolet Sonic subcompact.

GM probably won’t have to make big changes to the factory in order to expand Bolt production. But boosting output could still take some time, though it won’t be anything like the fits and starts we’ve seen as Tesla (NASDAQ: TSLA) has tried to ramp up production of its Model 3. (By the way, did you catch Barra’s subtle dig at Tesla? The reference to “more than 100 years of manufacturing expertise” is a reminder to investors that mass production isn’t a challenge for GM in the way that it seems to be for the Silicon Valley upstart.)

While Tesla appears to be trying to reinvent auto manufacturing from first principles, the reasons why it’ll take time to ramp up production of the Bolt are comparatively mundane. First, the companies that supply parts for the Bolt will have to ramp up their own production lines, and that won’t happen overnight. Second, depending on GM’s production target, the factory may have to hire and train a second shift of workers.

The upshot: Despite the recent U.S. sales decline, GM is upbeat about the Bolt

While the Bolt’s total sales volumes are barely a drop in GM’s global bucket, the little electric crossover has outsized significance for GM and its investors. It’s not just GM’s way of demonstrating that it has the technology to be competitive as the world shifts to electric vehicles, it’s also GM’s lead product for new business models like urban car-sharing and (soon) self-driving taxis.

If GM is able to build and sell (for instance) an additional 30,000 Bolts a year, that’s much more significant than building another 30,000 SUVs, even if it doesn’t have the same impact on GM’s bottom line. It’s an important indicator of how well GM is adapting to the drastic changes coming to its industry. So far, signs suggest that GM is adapting quite well — better than most of its rivals.