There is a strong convention among divers about discovered gear: what you find, you try to return

This is a story about how, sometimes, everything just works out the way it’s supposed to — thanks to the world of social media and maybe just two degrees of separation. And it begins with a watery grave.

The island of Cozumel off Mexico’s Mayan Riviera is a magnet for scuba divers. Its reefs and wildlife attract divers from around the world.

In February, I joined the underwater hordes in the crowded ocean for a diving vacation. But things started badly.

On my second dive, I climbed back onto the boat to discover that my old but much-loved GoPro camera was no longer attached to my gear. It had been knocked off as I climbed out of the ocean.

Unfortunately, the diving around Cozumel is mostly what is called “drift diving,” where you are pulled along by strong currents. So by the time I noticed the camera was gone, the boat had already drifted several hundred metres.

I was saddened, but after many years of sterling service around the world I was also happy that it had been buried at sea. It seemed appropriate and, anyway, I had a larger, newer camera with me to record all the turtles, rays, sharks and moray eels on the Cozumel reefs.

The next day, I was back in the water on a different part of the reef. I was exploring a coral outcrop when I found what looked like a brand new GoPro — sleeker, faster and a lot more expensive than the one I had just lost.

It seemed like the universe was giving back, after so cruelly taking from me.

But there is a strong convention among divers about discovered gear: what you find, you try to return. Particularly something as expensive and personal as an underwater camera.

So once we were out of the water, I started asking around. I knew the camera had not been underwater for long, so I spread the word around among all the divers I could find.

Perhaps surprisingly — because on a busy day there can be 40 or more boats around a site and 500 divers underwater — I found the owner.

“The only thing better than finding a camera,” I told him, “is being able to return it.”

Strangely, finding someone else’s camera lessened the pain of losing my own.

A week later, back home in Halifax, I get a message from a Facebook friend.

“Someone found your GoPro,” he said, attaching a screengrab of a posting on a Facebook forum for divers. 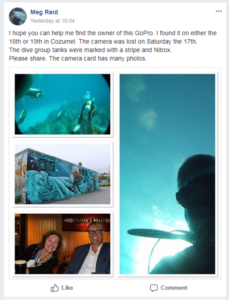 I messaged the finder. Meg Reid, it turned out, lives in a small town near Austin, Texas.

What was she doing diving in Cozumel? She had a story to tell. Reid and her husband retired to live on a small pecan orchard in Rockdale to escape the expense of living in Austin.

Then Meg found that she had breast cancer.

After chemo, a radical double-mastectomy and radiation, she decided to embrace new challenges, including diving. Her husband wasn’t interested, so Meg joined up with a group called the Diving Divas — all women over 40.

The trip to Cozumel was her second adventure with the Divas and that is where she spotted my camera nestled in the sand by a coral head. So of course, she had to try and find out who owned it. It only took a couple of days.

And, of course, I had to find a way to say thank you; I offered to send her a CBC T-shirt.

“How sweet!” she said. “The joy of returning your camera is thanks enough.”

But she confessed: “You had me at T-shirt.”

So if you happen to visit the town of Rockdale — population 5,851 — look for a small pecan orchard and a lovely woman wearing a CBC T-shirt.

Be sure to say hi to Meg for me.