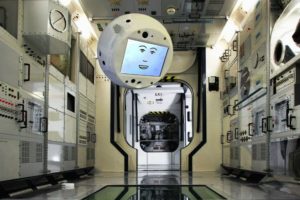 No space adventure — of the fictional type, at least — is surely complete without assistance from an A.I. character. Think HAL in 2001: A Space Odyssey, Moon‘s GERTY, and Holly in the BBC’s Red Dwarf.

Well, reality looks set to catch up with science fiction this summer when the International Space Station (ISS) crew welcomes aboard CIMON, described as a “mobile and autonomous assistance system.”

Developed by Airbus and Germany’s DLR space agency, and powered by IBM’s Watson supercomputer, CIMON — short for Crew Interactive MObile companioN — will be the first form of artificial intelligence to arrive on the space station and will do its best to help the astronauts with a range tasks, as well as be their buddy.

CIMON will travel to the ISS with German astronaut Alexander Gerst in June, 2018, as part of the European Space Agency’s Horizons mission, and stay there until October.

It’s “a kind of flying brain”

“We are the first company in Europe to carry a free flyer, a kind of flying brain, to the ISS and to develop artificial intelligence for the crew on board the space station,” said Manfred Jaumann, Airbus’s head of microgravity payloads.

In simple terms, CIMON resembles a floating computer monitor with a crudely drawn face on the display. But according to CIMON’s creators, it’s a whole lot more than that, with the team behind the 11-pound (5 kg) contraption claiming it’ll help solve problems while behaving like a regular crew mate.

Thanks to its A.I. smarts, the more CIMON interacts with the crew, the more it’ll learn about their work. It’ll also recognize each crew member and respond accordingly, gradually improving as an assistant to become “a genuine colleague,” as Airbus puts it.

“With CIMON, crew members can do more than just work through a schematic view of prescribed checklists and procedures; they can also engage with their assistant,” Airbus said. “In this way, CIMON makes work easier for the astronauts when carrying out everyday routine tasks, helps to increase efficiency, facilitates mission success, and improves security, as it can also serve as an early warning system for technical problems.”

Once CIMON has settled into life on the space station, Gerst will work with his A.I. assistant on three specific tasks, the most interesting of which involves performing a complex medical experiment using CIMON as an intelligent flying camera.

But Airbus’s creation won’t be the first high-tech bot to visit the ISS. Over the years, the station has also hosted Japan’s Kirobo, a floating camera sphere called Int-Ball, and a humanoid robot called Robonaut.