3 Dividend Stocks That Are Minting Money 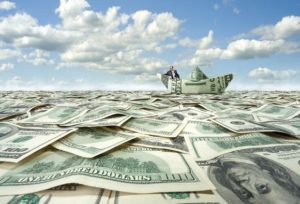 Five hundred and sixty million dollars. That’s a lot of money — and it’s how much the U.S. Treasury prints on a daily basis.

There are three companies that, combined, generate free cash flow on an average day that isn’t too far behind that amount. And they use a nice chunk of that cash flow to reward shareholders with attractive dividends.

The three dividend stocks that are practically minting money are Apple (NASDAQ: AAPL), Johnson & Johnson (NYSE: JNJ), and Wells Fargo (NYSE: WFC). Together, the three giants generate free cash flow of over $92.5 billion annually, or more than $350 million on average each work day. Here’s how they do it — and whether or not these stocks are smart picks for long-term investors.

Apple generated free cash flow of more than $52.3 billion over the last 12 months. The technology company currently sits on a cash stockpile totaling $285 billion, including cash, cash equivalents, and marketable securities. Apple uses its cash to pay a dividend which currently yields 1.44%.

Roughly 70% of Apple’s money stems from sales of iPhones. The company’s next biggest moneymaker is services, which account for a little under 10% of Apple’s total revenue. These services include App Store sales, AppleCare maintenance contracts, Apple Pay mobile payments, and licensing. Sales of Macs, iPads, and other products such as Apple Watches and Beats headphones round out Apple’s revenue sources.

As the numbers show, Apple’s fortunes depend heavily on iPhone sales. There is good news and bad news about the iPhone’s prospects for the future. First, the bad news: Apple’s lower-than-expected revenue guidance for the first quarter of 2018 hinted at potential slowing demand for the iPhone X. The good news, though, is that Apple is hard at work at the next generation of iPhones. The company’s loyal customers should keep on coming back for new versions, which means Apple’s cash flow isn’t likely to taper off anytime soon.

Johnson & Johnson ranks as the largest healthcare company in the world. Over the last 12 months, J&J generated free cash flow of nearly $17.8 billion. The company doesn’t have nearly as large a cash stockpile as Apple, but reported a not-too-shabby $18.3 billion in cash, cash equivalents, and marketable securities at the end of 2017. J&J’s dividend yields 2.55%, and the company has increased its dividend for a remarkable 55 consecutive years.

Nearly half of Johnson & Johnson’s total revenue comes from its pharmaceutical segment. The company’s top-selling pharmaceutical products include autoimmune-disease drugs Remicade and Stelara. J&J’s medical device segment generates roughly 35% of total revenue, with its surgical and orthopedics products making the most money. J&J’s consumer segment kicked in the rest of the company’s revenue, with its beauty and over-the-counter products producing the highest sales.

Although Johnson & Johnson faces declining sales for No. 1 drug Remicade thanks to a biosimilar rival, the company is enjoying solid growth from several other products, especially cancer drugs Darzalex and Imbruvica. J&J also has made several acquisitions over the last couple of years to fuel growth, including its purchase last year of Swiss drugmaker Actelion.

Wells Fargo generated nearly $22.5 billion in free cash flow over the last 12 months. And that came during a year that the financial services company would probably like to forget: Wells Fargo continued to experience the aftermath of the “fake accounts” scandals that were first reported in 2016. However, that controversy hasn’t hurt Wells Fargo’s dividend, which yields 2.65%.

The company makes more than half of its total revenue from net interest payments on loans and debt securities. However, Wells Fargo also makes money in several additional ways. Its brokerage business contributes a little under 10% of total revenue from commissions and other fees. Credit cards issued by Wells Fargo and mortgage banking each add another 4% of total revenue. There’s also a laundry list of smaller sources of revenue, including insurance sales and wire transfer fees.

By far the biggest challenge for Wells Fargo right now is that the Federal Reserve recently dished out an unprecedented penalty: The bank cannot grow assets larger than its 2017 ending balance until it makes “sufficient improvements.” This hit Wells Fargo at a time when its peers are positioning for growth.

It’s not hard to find reasons to avoid buying each of these stocks. Apple faces uncertainty about momentum for its iPhones. Sales for Johnson & Johnson’s top product are falling. Wells Fargo is in the biggest mess of the three, with the recent Federal Reserve penalty.

But I would argue that all three of these issues are only temporary. Apple continues to enjoy brand loyalty and a nice moat from its ecosystem of products and services. J&J is focused on internal innovation and external acquisitions, overcoming sales declines for older drugs like Remicade. Wells Fargo is taking steps to put its house in order and rebuild customer trust — and convince the Fed to remove the growth-limiting penalty.

In the meantime, each company should keep those nice dividend checks flowing. And each company should put its tremendous cash flow to good use in other ways that reward shareholders. In my view, temporary problems shouldn’t prevent Apple, J&J, and Wells Fargo from being long-term winners. These dividend stocks appear likely to keep minting money for years to come.