The regular, hard-top Aston Martin DB11 has been with us for a little while now – but here’s an all-new version – the Volante. Accompanied by the same elegant looks but now with the roof lopped off, it’s there for those who want the top-down experience with huge amounts of performance to boot.

However, there’s no V12 under the bonnet here – nor will there ever be – as the DB11 Volante is offered with a turbocharged V8 only. It’s also been extensive stiffened to ensure that it still handles just as keenly as the hard top.

Of course, the biggest feature to talk about is the Volante’s fabric folding roof. Made up of eight layers, it’s been designed to offer the very best refinement when in place, while taking up the least amount of space when folded away. It takes 14 seconds to raise or 16 seconds to lower, and this can be done at speeds of up to 31mph. 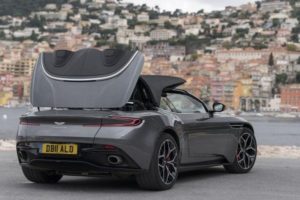 In action it’s an impressive feature, and one that looks just as elegant as the car’s styling. It also does little to interrupt the car’s lines when raised – something you don’t often see on soft-tops.

What’s under the bonnet?

The Aston Martin DB11 Volante is one of the latest cars from the British manufacturer to use an AMG-sourced twin-turbocharged V8 engine. Here, it produces 503bhp and 675Nm, sending drive to the rear wheels via an eight-speed automatic gearbox. As we’ve found in countless AMG models, it’s a very impressive unit, with plenty of low-down torque ideal for wafting you along at a considerable lick.

The DB11 Volante also benefits from adaptive dampers, with three drive modes giving you the ability to soften or harden the car’s ride. Though our test roads in the south of France were really quite smooth, this feature will certainly pay dividends back in the UK where the road surface is a little more broken up, to say the least.

Powerful soft-top sports cars need to be as accomplished at going slowly as much as they need to be at going quickly. After all, lopping off the top never does wonders for a car’s dynamics, but having a folding roof leaves you free to enjoy the surroundings and take in the view – all of which can be enjoyed at medium to high speeds. When you take this into account, the Volante hits the nail on the head. The suspension is soft and pliable enough to deal with imperfections in the road, and this makes it more relaxing to drive – just how a soft-top sports car should be.

The engine has plenty of punch, while the steering is much quicker than you’d expect for a car of this size – giving you the right tools to make the most of the bends.

How does it look?

Few cars can match the DB11 Volante when it comes to visuals. We’d argue that it looks even better in drophead form than in regular coupe layout, with cuts and creases applied in all the right places. It even looks good with the roof up, the taught cloth failing to make the car look dumpy as is the case in so many other roadsters. 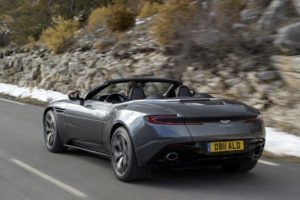 New design touches, such as a more intricate alloy wheel style, help lift the look of the Volante. It’s easily one of the most elegant cars on sale today, and certainly does best in brighter shades – Aston offers a deep red colour with the Volante, and it elevates the look of the car even higher.

The latest generations of Aston Martin have inherited quite a lot of interior architecture from Mercedes-Benz, and as such you’ll recognise much of the infotainment system and button designs from the German manufacturer’s cars.

However, as we found in the regular DB11, the dashboard’s layout remains a little confusing, with little to distinguish between the buttons on the gloss plastic surface. That said, other elements of the cabin are meticulously well made – highlights include the leather-lined dashboard and uber-comfortable seats which offer plenty of support, yet are well-cushioned enough for longer journeys. There are two rear seats – these aren’t really useable for anyone but young children, though there are now ISOFIX child seat points – so smaller kids can come along for the ride too.

Prices for the Aston Martin DB11 Volante start at £159,000 and, thankfully, you do get a good amount of standard equipment for that price. A full-grain leather interior comes as standard, as do electrically-operated front seats which are heated too. A new feature is a heated steering wheel, something we, while driving the car roof-down in -4c, were glad to see. A full satellite navigation system with smartphone connectivity also comes as standard, along with automatic dual-zone climate control. 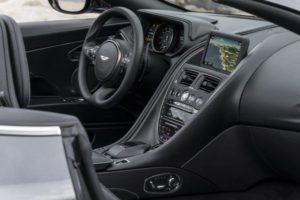 We’re going to go out on a limb here – the Aston Martin DB11 Volante makes even more sense than the hardtop. Somehow, the combination of well-judged suspension, characterful engine and wind-in-your-hair design makes for a car that is both comfortable yet involving to drive. You could see yourself spending a few thousand miles behind the wheel without any complaints – either from your back or the other passengers in the car.

Add into this desperately good looks, and you have a pretty impressive package. Some niggles – such as the complicated dashboard – but once the roof is down and the engine is in full song, these really do drift away.