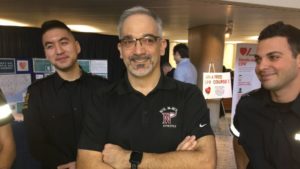 For the first time since his heart attack nearly three months ago, John Turco found himself surrounded by the people who played a role in saving his life. The 51-year-old got choked up as he shook their hands.

Turco was at city hall Wednesday as Mayor John Tory officially dubbed Feb. 14 “Safe City Day.” Toronto Paramedic Services operate a program called Safe City, which trains thousands of Torontonians every year in CPR and the proper use of a defibrillator.

Turco said he may not be alive today if he wasn’t surrounded by friends with this training back on Nov. 23.

He was playing pickup basketball at Neil McNeil High School, where he’s also a phys ed teacher. Turco said he had already been playing for more than an hour when a friend asked if he wanted to play one more game.

Gerald Rozario played on Turco’s team that day. He said there were no signs of any trouble early in the game.

In fact, Rozario said Turco had just scored a basket and was backpedaling towards the defensive end of the court when he collapsed.

“I remember from my peripheral him just falling straight back, and I remember his head bouncing off the ground,” Rozario said.

Without hesitation, Rozario said he yelled out for someone to call 911 and then asked another player to run and get the defibrillator.

Rozario and two other men immediately began to administer CPR to Turco. It was something Rozario had taken a course in, but he’d never had to do it in a real life situation.

When they were unable to get a pulse, they decided to go a step further.

“We cut his shirt and gave him the defibrillator,” Rozario said.

Not long after that emergency response crews arrived. Steven Deans was the first paramedic to get to Turco.

“I could see his chest moving up and down from across the gym floor,” Deans said. “Excellent sign, that makes my heart rate drop.”

Paramedic Chris Miller says by the time he got there, everything was under control thanks to Turco’s fast-acting friends.

“This is the first experience for me, seeing bystanders coming together like that,” Miller said.

By the time they got Turco into the ambulance he was conscious and speaking. Deans said he even started cracking jokes.

“He was saying, ‘Aw man, my wife’s going to kill me, she hates when I play basketball.'”

It turns out, it’s not his wife he had to worry about.

He hopes to return to the court as soon as he’s cleared by his doctors.

PrevPreviousIf You Bought $1,000 of Ripple in 2017, Here’s What It Would Be Worth Today
NextBehold the potatoes of the futureNext