Behold the potatoes of the future 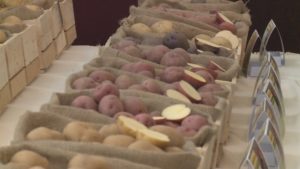 After years of research and development, 15 of the newest varieties of potatoes were displayed in Fredericton to give growers a starchy taste of the future.

Agriculture and Agri-Food Canada’s Research and Development Centre in Fredericton is where scientists come to create the spuds of tomorrow.

Researchers there are constantly trying to breed tubers that will grow more efficiently and last in storage longer.

Each year, the centre hosts a fair of sorts, where researchers get to show off new varieties to farmers and companies.

On display this week were 15 varieties ideal for french fries, chips or grocery bins.

“Each of them has unique attributes that we think could make them more competitive,” said research scientist Benoit Bizimungu. The improvements target things such as the yield of potatoes per plant and resistance to disease.

In the world of french fries, Bizimungu said, the Russet Burbank reigns supreme.

“It’s been dominant for some time,” he said. “One of its strengths is it really stores very well.”

But Bizimungu said it has begun to show its age and hasn’t kept up with some modern techniques in agriculture.

The process of producing new breeds, said Bizimungu, is anything but fast. The whole process from cross-pollination to sale, can take up to 12 years.

The breeds on display are so new, they don’t even have names yet. Just designations of numbers and letters, which potato producers can bid on to develop further.

“We have two varieties that industry is already interested about,” she said.

Dickison said now those potato variations will go into another phase of development before they’re licensed for sale.

Cecil Goutbeck has been coming to the Fredericton Research and Development Centre for six years. The chairman of the board at the Alberta Seed Potato Inc., Goutbeck said there’s good reason to keep coming back.

“We’re looking for good quality replacement potatoes, basically — potatoes that have, could beat out the other varieties,” he said.

While the various new breeds of potatoes may not be ready for sale, they are edible. Inside the kitchen at the centre’s cafeteria, a team of chefs cooked up examples of how the potatoes can taste.

PrevPrevious‘It’s emotional, to say the least’: Toronto man meets paramedics who saved his life
NextMicrosoft celebrates five years of the Surface Pro by shaving $200 off the priceNext