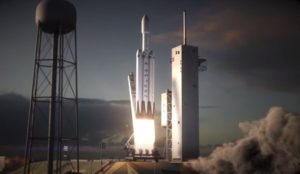 It’s time for Elon Musk and his launch company, SpaceX, to shake up the world of off-planet travel once again. After a year of successful launches and recoveries of the Falcon 9 rocket’s first stages, Musk has his sights set on heavier payloads, more launches, and bigger missions — all of which will theoretically be possible with the introduction of SpaceX’s newest rocket: the Falcon Heavy.

Here’s everything you need to know about what’s soon to be the world’s biggest, baddest rocket.

Big is exactly the deal. When the Falcon Heavy makes its debut, it will become the world’s largest operational rocket — dwarfed only by the Saturn V rocket, which was last flown in 1973. Weighing in at 54 metric tons (119,000 pounds), the Falcon Heavy also boasts an operational payload of more than two times its closest competitor, the Delta IV Heavy, yet can be produced for just a third of the cost.

This is made possible by drawing heavily upon the proven success of the Falcon 9 rocket system, as the first stage of the Falcon Heavy is composed of three Falcon 9 engine cores. The combined 27 Merlin engines generate more than five million pounds of thrust at liftoff, equal to the power of 18 747 aircraft. (While we wait for the liftoff, here are seven more amazing facts about the Falcon Heavy.)

First mentioned by Musk in 2005, and originally scheduled to become operational just a few years later, the Falcon Heavy has been in production for quite some time.

Since then, a number of different things (additional testing, the CRS-7 launch failure, and extensive launch pad renovations) have contributed to years of delays. But now, with its maiden voyage set for February 2018, business is piling up for SpaceX.

Since its announcement, the Falcon Heavy has drawn a lot of attention. Despite the fact that the rocket hasn’t completed a successful mission yet, there are already plenty of big businesses lining up to get their payloads on board — including military contractors, telecommunications firms, and scientific organizations.

Currently, the Falcon Heavy’s launch itinerary includes contracts from organizations like Arabsat and the United States Air Force. There is also a much-anticipated trip around the moon on the books, as well as a mission that seeks to blast Musk’s cherry red Tesla into orbit.

Now that the craft has been assembled, run through preliminary tests, set vertical, and stuffed with its first payload (Musk’s aforementioned red Tesla), the Heavy’s first launch is rapidly approaching. It first passed its static fire test on January 24 and is now slated for its full launch on Tuesday, February 6. You can tune in to see all the action by checking out the live webcast.