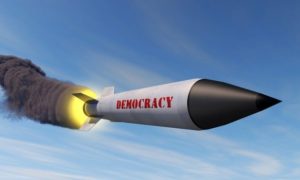 Ever since Hawaii’s false alarm about a non-existent North Korean nuclear missile attack last month, missile defense has been at the top of defense investors’ minds. Turns out it’s on the Pentagon’s mind as well.

Over just the past two weeks, the U.S. Department of Defense has announced two multi-billion-dollar awards to defense contractors tied to the business of missile defense. Let’s take them in turn:

Raytheon is a PATRIOT — and that’s good news for investors

Commonly known simply as “PATRIOT,” this missile defense system consists of three main parts: A radar system to detect, track, and target hostile missiles, a missile launcher (both built by Raytheon), and a magazine full of interceptor missiles (built by both Raytheon and Lockheed Martin (NYSE: LMT)) to take down the offending objects.

The PATRIOT is arguably Raytheon’s most recognized product, and indeed a popular product all around the globe. Since achieving initial operating capability in 1984, Raytheon has produced more than 220 Patriot “fire units” and sold them to the 14 nations that use the PATRIOT for short- and medium-range missile defense — which have in turn used PATRIOT in combat more than 200 times.

Fortunately for investors, PATRIOT is also inarguably one of Raytheon’s most profitable products. Housed within Raytheon’s second-to-smallest business division, Integrated Defense Systems, PATRIOT contributes to that business’s whopping 16.1% operating profit margin, the strongest of any Raytheon division according to data from S&P Global Market Intelligence.

At that margin, Tuesday’s PATRIOT contract award can be expected to generate in excess of $370 million in pre-tax operating profit for Raytheon.

Believe it or not, though, Raytheon’s profits from PATRIOT aren’t even close to the profits that Boeing (NYSE: BA) is likely to earn from its latest missile defense contract. One day after the PATRIOT contract was announced, the DoD awarded Boeing $6.56 billion to extend the company’s prime contractor role developing and maintaining the Ground-based Midcourse Defense (GMD) missile defense system. In order to enhance missile defense, the Pentagon is hiring Boeing to build two new missile silos for its GMD base in Alaska and create an entirely new missile field “with 20 additional silos” at a location yet to be revealed.

In contrast to the PATRIOT, which was initially designed to function primarily as an anti-aircraft system and only later pressed into service to shoot down short-range Iraqi Scud ballistic missiles, GMD was built from the “ground” up to serve as a missile shield against long-range intercontinental ballistic missiles (ICBMs). Also in contrast to the PATRIOT, which generally targets missiles as they are descending toward their target, GMD aims to destroy them in space, at the “midcourse” point in their ballistic arcs, by striking them with an “exoatmospheric kill vehicle.”

At least four separate companies play key roles in GMD, including Northrop Grumman (NYSE: NOC), Orbital ATK (NYSE: OA), and Raytheon itself, which makes the GMD interceptor missile. (The DoD will be buying 20 more GMD interceptors as part of this contract, by the way.) That’s good news for Raytheon’s biggest business unit, Missile Systems, which at a 13% operating profit margin is none too shabby in the profits-making business. Still, as the prime contractor on GMD, Boeing can be expected to reap the lion’s share of the profits from Wednesday’s mammoth contract award.

How much might Boeing earn? Boeing hosts GMD within its smallest major business segment, Network & Space Systems. But as is the case with Raytheon, this also happens to be Boeing’s most profitable business unit. Earning 12.9% pre-tax operating profit margins, Boeing NS&S can be expected to earn nearly $850 million from Wednesday’s GMD contract over the course of the six years this contract will run.

Bad news for North Korea’s nuclear ambitions, perhaps, but good news for shareholders of Raytheon, Northrop Grumman, Orbital ATK — and Boeing most of all.