Handy Tips To Reduce How Much Food You Throw Out 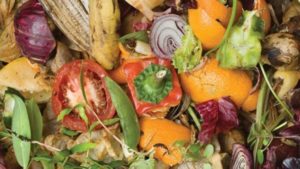 I share the weekly grocery shopping chores in our household of four, and the last couple of years we’ve really tried to reduce the amount of food we throw out due to spoilage. It’s a real guilt-inducer, from the money wasted to the fact that others don’t have enough to eat.

Though the family takes meal planning semi-seriously and shops accordingly, there are always a few wrinkled potatoes, slimy peppers, stale rice cakes or that half-container of cottage cheese stuck at the back of the fridge that we regretfully toss before we head out to replenish supplies. I’m loathe to add up the weekly cost, but it’s probably as much as five per cent of our total grocery budget.

In Canada, $31 billion worth of food ends up in landfills or composters each year, according to the most recent report from Value Chain Management International.

I asked P.E.I. personal chef Jen McKenna of Creative Kitchen for her advice on reducing food waste, as well as soliciting your thoughts on Facebook.

Plan your meals before you head out to grocery shop, then stick with the list. “This way you know what you have, and it gets used,” McKenna says. She suggests setting aside time to research recipes and meal plan.

While many people understand this simple concept, carrying it out can be overwhelming.

“They don’t know what recipes are actually good so they tend to stay away from researching new ideas to keep food exciting,” she says.

Meals she cooks most often for clients include meatballs, shepherd’s pie, chicken pot pie and cashew chicken, she said.

Plan a few meals every week that freeze well, and some that don’t, McKenna says. Eat meals with items that spoil more quickly, like salad, at the beginning of the week, then toward the end of the week pull the others from the freezer.

“Keep a white board on your fridge of things in your fridge so you know what you have and when to use them,” McKenna suggests.

This will help you remember veggies hiding in the bottom of the crisper drawer and containers out of sight at the back of the fridge.

Scraps from cooking can fill up your compost bin in a hurry — don’t toss them, McKenna.

“Save any peelings and scraps from veggies — freeze in ziplock bags — to make a veggie stock,” she suggests.

“Spinach going bad? Freeze it and put it in pastas, smoothies, etc.,” McKenna says. Mash up avocados and freeze in little bags ready to use.

“Fresh herbs, can’t use them all? Blend them up with a bit of oil and put it in ice cube trays to freeze. Take one out and add to any dish to flavour.”

“Keep chopped-up celery, carrots and asparagus in water. It will keep it crisp and last longer,” McKenna says of veggies in your fridge.

“If they are coming to their last days and you put it in water it can be good up to five days.”

McKenna attended the Culinary Institute of Canada and worked in several local restaurants before starting Creative Kitchen, which cooks meals in clients homes for those who are too busy or don’t enjoy cooking but want healthy home-cooked meals. The business recently expanded to Moncton, N.B., and has hired three more trained chefs who cook for two or three households per day. They’ve also started online cooking classes on Facebook.

“Our household of three decide what we want to eat that week. We don’t buy anything else and stick to eating from what we have. Leftovers don’t happen now. We call it ‘eating the fridge,'” says Judith Bayliss on Facebook.

From Alex Murchison: “A small deep freezer made a huge difference in how I break down, save and control my food portions. Bought it new five years ago, it was well worth the $200ish.”

“Tupperware Fridgesmarts has helped us save lots of money on produce all year round. They have also helped my family and friends save money,” shares Marlie Rayner. Tupperware’s website says their Fridgesmarts plastic containers extend the life of produce — a set of four costs $110. Rubbermaid makes its own version called FreshWorks, which I spotted for $33.00 for a set of three.

Courtney Sudsbury freezes any produce that isn’t going to be eaten in time. “It all gets blended in to smoothies, chili, sauces etc.,” she says. “And our guinea pig helps use up the greens.”

‘There are no leftovers’

Bernadette and Len Currie say subscribing to Chef’s Plate has dramatically cut their food waste and even their grocery bill.

“There are no leftovers so we are eating what we make and that’s it,” Bernadette says.

Len adds: “Some would say the $65 (what we spend in total for three meals for two per week), is expensive but I think it’s very fair and the selection is incredible. Wasting food is my biggest pet peeve, and we basically waste none now.” Everything comes in recyclable or compostable containers, he adds.