Ever Wondered How Lasers Work? Here’s Everything You Need To Know 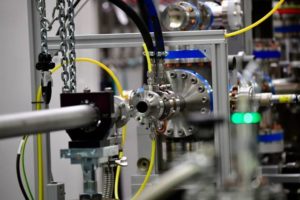 Lasers! Clearly they are awesome — but how do they work, exactly? Why aren’t we all carrying them around in our pockets? Well, believe it or not, you probably are — thanks to modern electronics. Here’s the story of how a laser (light amplification by stimulated emission of radiation) operates, and what it does when it hits an object.

It’s all about electrons

Let’s spend a little time back in physics class: A laser owes its existence to electrons, which you may remember are those energetic particles that hover/exist around an atom, forming its “shell.”

Some electrons have the ability to absorb energy from outside sources and jump to higher-energy orbits, at least temporarily. However, the electrons quickly return to their normal orbits, and release the extra energy they used, which then ripples outside of the atom.

Electrons do this all the time—it’s how most radiation is created! Switch on a flashlight, and there’s a bunch of electrons cascading energy levels all over the place. But the reason that your flashlight is not a powerful laser beam (sorry) is that those electrons aren’t in sync. Instead, they hop all over the place, release energy randomly, and are hardly ever at the same wavelength or the same timing. In fact, electrons seem to naturally disperse their wavelengths and timing in these situations, which makes accidental lasers almost—but not entirely—impossible.

When creating a laser, engineers have to act like orchestra conductors for an innumerable number of electrons, getting them all to gain energy and release it in sync. When successful, this creates a coherent stream of photons that all move in the same manner, at the same time, in the same direction…and a laser is born. This happens thanks to a carefully constructed process and the right materials, which we will talk about in the next section!

Anatomy of a modern laser

Lasers come in all sizes, from tiny little lasers in microchips to vast lasers in science research facilities. However, most can be broken down into three very important parts that allow the laser to function.

Energy source: First, lasers require an energy source (also called pump sources or excitation mechanisms) to pump energy into the laser so that its electrons have a lot of juice to work with. There are several different popular types of energy sources, including direct electrical discharges, chemical reactions, and powerful sources of light like flash lamps.

Medium: The medium (typically called the gain medium or laser medium) is where the energy is directed. Its job is to gather that energy, get its electrons to jump around like crazy, and emit powerful bursts of light that are ready to be formed into a laser. Mediums cover a wide range of materials: Some are liquids, some are gases, and some are crystalline solids. Even a humble semiconductor can act as a laser medium.

Optical cavity: The optical cavity or resonator takes all the light released by the medium and focuses it. In the classic laser setup, it uses two mirrors to bounce that light back and forth to sync up the pulses, amplifying the energy and routing it toward a small opening where the laser is directed.

What happens when a laser hits something

When a laser strikes a material, it acts just like other radiation: Some is absorbed, some is reflected, and some may pass through or be transmitted. But that doesn’t tell us much about what a particular, focused laser actually does to the material, so let’s take a closer look at several major categories of practical laser uses, and how they work.

Illumination: In this case, lasers are simply used to illuminate something that’s hard to see. That’s right, sometimes even the trusty flashlight won’t do, especially at very long distances — or when teachers really want to use a laser pointer. And yes, this can be dangerous.

Reflection: When lasers focus on reflection, they are typically transmitting information. The best example here is an optical disk drive found in Blu-ray players, computers, and so on. However, there are many smart device applications too.

Transmission: Here the laser is designed to pass down a code that encases valuable data, as in fiber optics.

State change: This is sort of a catch-all category, but in a number of cases the purpose of the laser is to change the material or change itself into a different type of energy (without burning anything). In this case, the material absorbs the laser and then undergoes an interesting transformation. For example, some lasers turn light into sound. Many such devices have valuable applications in everyday engineering.