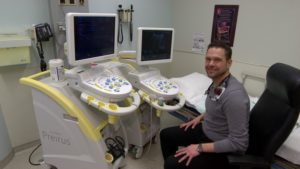 A gastroenterologist has brought new technology he discovered at a German hospital in the United Arab Emirates to Saskatoon after studying how to use the equipment in Italy.

The $200,000 machine will prevent patients with inflammatory bowel disease, such as Crohn’s disease and ulcerative colitis, from needing to have invasive colonoscopy procedures.

The monitoring they need can now be completed with an intestinal ultrasound, providing instant results at the patient’s bedside.

Dr. Tom Guzowski, an assistant professor of gastroenterology and internal medicine at the University of Saskatchewan, said intestinal ultrasound is a new technique in Canada that is only being used at two other universities in Calgary and Toronto.

He said patients who previously needed to have a colonoscopy every year and a CAT scan every two years can now have an ultrasound instead.

Previously those patients might have waited months for a colonoscopy, which requires preparation with laxatives, a day in hospital and involves some risk.

Repeated CAT scans can also increase the patient’s risk of lymphoma, he said.

“This is right there and then. You can just scan them when they come to clinic and decide on treatment and things like that,” said Guzowski.

“It’s kind of a big step for us to be able to offer better care.”

Guzowski came across the technology while he was working as a physician at a German hospital in the United Arab Emirates.

He moved to Italy to get more training in the field of clinical ultrasound, which he said is a growing trend in medicine.

“Bowel ultrasound is one piece of a bigger picture called clinical ultrasound, where you go to see patients, you talk to them and then you just do an ultrasound at the bedside,” he said.

“Which gives you information that would go along with your vital signs physical exam that can help make decisions in real time.”

When Guzowski returned to Canada he asked the university to apply for funding from the Saskatoon City Hospital Foundation and they agreed.

Although ultrasound has been around for some time, Guzowski said it was previously thought it could not be used to screen lungs or intestines because they contain a lot of air which cannot be seen through ultrasound.

“It turns out that’s not really true because the intestines are very soft and compressible so you can actually get really good pictures despite the air,” he said.

“There is a way to use it you just have to know what you’re doing.”

The technology does have some limitations as it cannot be used to screen for colon cancer.

Guzowski is now training other physicians in Saskatoon how to use the technology, which he said is stronger and more powerful with a higher-definition image than older ultrasounds.

An international bowel ultrasound course will be held in Calgary in April, with specialists from Germany and Australia, to recruit and train more doctors in Canada to do similar work.

The Saskatoon equipment is currently being used about 10 times a day, two days per week, but Guzowski expects that number will grow as more physicians are trained to use it.