Don Taylor at the Franklin Rising Dividends Fund disregards companies’ current dividend yields when selecting stocks. Instead he focuses on the strength of their underlying businesses.

If a company increases its sales, earnings and cash flow enough to support significant and consistent increases in dividends, its stock should perform well in the long run, he reasons. Taylor has used that strategy since he helped establish the $19.4 billion Franklin Rising Dividends Fund FRDPX, +0.55% in 1996.

The fund’s strategy is to select companies that are expected to post double-digit increases in dividend payouts over the long term.

“The core is underlying business growth,” Taylor said in an interview Jan. 16.

In other words, if a company is reinvesting to keep its business growing over the long haul, that in itself will support significant increases in dividend payouts.

Taylor shared four stocks he favors based on the companies’ ability to increase their dividend payouts. Before getting to those, let’s take a look at three favorite dividend stock plays he shared in September 2016 and see how they have performed since then.

• Microsoft Corp. MSFT, -0.11% returned 58% over the same period. (Taylor’s new comments about the company are below.)

Getting back to his Microsoft pick in September 2016, Taylor believes the stock “is not as controversial as it was” at that time, as the company is “back into top-line growth mode.” It was the second-largest holding of the Franklin Rising Dividends Fund as of Dec. 29.

In September, Microsoft raised its quarterly dividend to 42 cents a share from 39 cents, for its second straight 8% increase. This September, Taylor expects the company to revert to its usual habit of a double-digit dividend increase.

“They slowed the [dividend growth] rate when they bought LinkedIn,” Taylor said, “but the repatriation of cash [as part of the tax legislation President Trump signed Dec. 22] will give them more cash to play with.”

Becton, Dickinson & Co. BDX, +1.03% is an S&P 500 Dividend Aristocrat. This means it is among the 50 S&P 500 companies that have raised dividend payouts on common shares for at least 25 consecutive years and its stock is included in the S&P 500 Dividend Aristocrats Index SPDAUDP, +0.57% In fact, the company has raised its dividend for 46 consecutive years, and the Franklin Rising Dividends Fund has held the stock since 1996.

“We sold some shares and bought more at times along the way, but we have always had a position,” Taylor said.

When he first bought the shares, they had a dividend yield of only 1.25%, but he saw potential for steady double-digit payout increases. In November, Becton, Dickinson raised its quarterly dividend by only 3% to 75 cents a share. Over the previous 10 years, the annual dividend increases averaged 12%, according to FactSet. The lower dividend increase resulted from the company’s agreement to acquire C.R. Bard Inc. in a deal that was completed in December.

Despite the reduction in dividend increases, Taylor favors the Bard acquisition.

“In due course, we might have to deal with subpar dividend growth for a couple years, but ultimately, with that acquisition we will get to similar dividend growth rates we had before, perhaps even higher,” he said.

Accenture PLC ACN, +0.50% is another long-term holding for the Franklin Rising Dividends Fund. The company has increased its dividend for 13 straight years, according to Taylor. In September, the company raised the semi-annual dividend 10% to $1.33 a share. Taylor expects similarly sized dividend increases in the years ahead, with “sustainable” sales growth of 8%. For the three months ended Nov. 30, Accenture’s revenue rose by 12% to $10.05 billion.

Albemarle Corp. ALB, -1.61% is a major supplier of lithium, which is used in batteries. So there’s been an obvious need to increase lithium production as electric vehicles have become more popular.

This chart tells an interesting tale: 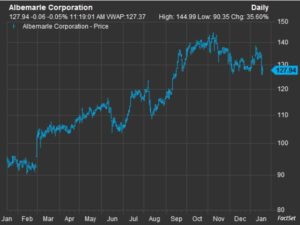 The share price was up 36% for 12 months through Jan. 16, but down 12% from its high of $144.99 on Nov. 8. This reflects investors’ fear that rising lithium production could put a major dent in prices for the commodity. But Taylor believes that the rapid increase in lithium consumption as electric-car production heats up will keep oversupply from being a problem for “several years.”

“I view the temporary drawdown of the stock as an opportunity,” he said.

Albermarle increased its quarterly dividend by 5% last February to 32 cents a share. That’s lower than Taylor would like, but with the company “in capital-spending mode,” he is willing to be patient. “The underlying growth prospects for the business are very strong,” he said.

The Franklin Rising Dividends Fund has five share classes with different expense structures and sales charges for two of the classes. This is a case in which a careful discussion with your broker or investment adviser is helpful. Morningstar rates the fund three or four stars out of five, depending on the share class.