Intel, AMD and other chip makers forced to confront chip vulnerability amid rain and a blackout in Las Vegas 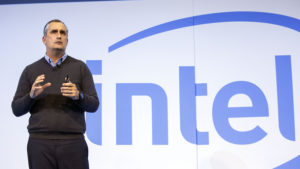 Despite being drenched and briefly thrust in to darkness, the largest annoyance for many top tech executives at CES was the shadow of Spectre.

The world’s largest electronics show immediately careened toward the twin maladies dubbed Spectre and Meltdown, potentially exploitable weaknesses in the brains of PCs and servers worldwide.

The next morning, Advanced Micro Devices Inc. AMD, -0.99% and Microsoft Corp. MSFT, +1.73% proved Krzanich’s point as thousands of exhibitors began showing off their wares—Microsoft had to halt patches to some AMD-based devices due to slowdowns and stoppages, damaging AMD”s stock just as Intel’s had been stoned the week before. The gray skies from a storm that soaked Vegas and closed down Google’s GOOGL, +1.67% GOOG, +1.51% most prominent CES presence on its first day were still lingering when MarketWatch met with AMD Chief Executive Lisa Su in a hotel suite that afternoon.

See also: The Meltdown and Spectre chip flaws — which devices are at risk, and what can you do to safeguard them?

Su said the problem was only affecting some “legacy processors,” meaning older AMD chips, and said the specific issue with the halted Microsoft patches would be fixed quickly.

“By the end of the week, this will be history,” Chief Technology Officer Mark Papermaster said in the same interview.

Su and Papermaster both insisted in the interview that chips wouldn’t have to be re-architected to avoid the techniques that appear susceptible, but little appeared to be set in stone—less than 48 hours later, Papermaster would update his blog post on the issue.

Other chip makers such as Qualcomm Inc. QCOM, -0.08% and Nvidia Corp. NVDA, -0.49% also addressed Spectre in blog posts, news conferences and interviews, with the words “complex” and “evolving” used repeatedly. The consistent takeaway about Spectre seemed to be, “If it has a central processing unit, we’re looking into it and hope to patch anything we need to with the help of our wonderful engineers/partners.”

But nothing is even that simple — when Nvidia released driver updates for its graphics-processing units, reports claimed it meant Spectre could be a danger for GPUs as well as CPUs, which CEO Jensen Huang forcefully denied. The confusion seemed to stem from the fact that the software update protected against an attacker seeking to leverage the GPU to attack the CPU, an example of the difficulty in clearly communicating complex computing concepts while building the needed software.

AMD also faced uncertainty, as Papermaster’s updated blog post was taken as a softening of AMD’s stance toward its potential vulnerability because the company removed a previous contention that there was a “near zero” susceptibility to one Spectre variant. AMD stressed that it still had not seen any opening for potential attacks, but was simply offering some new updates.

While these Spectre updates played out in public, many more were happening behind the scenes, as a show that typically focuses on fun gadgets and new technologies became a convention dedicated to the type of collaboration between tech companies needed to battle the potentially debilitating flaws.

Later in the week, MarketWatch bumped into AMD CEO Su while she was leaving a meeting with a major computer manufacturer. An agenda remaining in the manufacturer’s meeting room listed three columns of desired discussion topics, marked in green, yellow and red, the latter labeled “WHAT WE MUST ADDRESS”

Added near the end of those important mandated topics, with a red exclamation point: “AMD Processor Security.”

“Security is a particularly hot topic at CES this year and a priority for AMD, so it is obviously one of the areas of discussion across the industry with our partners, customers and researchers,” AMD spokesman Drew Prairie said.

While the experiences of other chip makers show Krzanich was correct that Spectre is an issue far beyond Intel, his company still seems to face the hardest road after leaving Las Vegas. The world’s largest chip maker has many more devices to help support, and has to ward off Spectre as well as Metldown, which is believed to be Intel-specific.

Wednesday’s blackout just added to the misery—while two of the three halls regained power quickly, the central space dominated by Intel’s plush carpets and virtual-reality demos was dark for at least an hour. Workers and others in an upstairs part of Intel’s booth were asked to remain, trapped in a darkened CES watching others exit below, staring back in confusion.

After the lights came back on, the show came back to life—More devices with new voice control techniques, more ideas for the autonomous cars of the future, more startups with crazy ideas and more companies latching onto cryptocurrency. Behind the scenes, executives returned to the meetings and deals that happen every year at CES, always with one extra agenda item haunting them.