2017 was a great year for glass and ceramics maker Corning (NYSE: GLW), which saw its stock rally 32% against the S&P 500’s 19% gain. The 167-year-old company ended a five-quarter streak of annual revenue declines with five straight quarters of growth as most of its business units roared back to life.

But can Corning keep outperforming the market this year? Let’s examine the company’s strengths and weaknesses to decide.

Corning expects to keep dominating this market, since its short list of competitors — including Asahi Glass’ Dragontrail and Schott AG’s Xensation — lack Corning’s brand recognition and scale. During Credit Suisse’s Tech, Media, and Telecom Conference in November, Corning CFO Tony Tripeny said that he expected the glass supply to be “balanced or even tight” for the foreseeable future.

Corning’s second-fastest-growing business is its optical communications unit, which supplies optical network components for service providers. Demand for these components is booming thanks to the higher network demands of streaming media, cloud services, and other data-intensive tasks.

That’s why the unit’s revenue rose 15% annually last quarter, and Corning expects its annual revenues to rise from $3 billion in 2016 to $5 billion in 2020.

Corning also recently acquired most of 3M’s (NYSE: MMM) communication markets business, which sells optical fiber and copper passive connectivity solutions. Buying that unit, which generates roughly $400 million in annual sales, could make it even easier for Corning to hit its 2020 target.

Corning’s life sciences unit is also posting steady growth thanks to strong demand for products like Valor Glass, a type of pharmaceutical glass packaging that reduces particle contamination, breaks, and cracks. Customers like Pfizer and Merck are already using Valor Glass, and other pharmaceutical and biotech companies should follow suit over the next few quarters.

Corning’s environmental technologies business is also generating stable returns thanks to strong sales of gas particulate filters (GPFs), which automakers use to meet emissions standards. Demand for GPFs should keep rising this year as governments tighten those standards and crack down on non-compliant automakers.

Corning’s only soft spot is its display technologies business, which posted annual revenue declines over the past two quarters on weak demand and low LCD prices. During the Credit Suisse conference, Tripeny said that “to generate acceptable returns on new investment, glass pricing will need to improve even further.”

Tripeny noted that TV demand in China “rebounded with mid single-digit unit growth during the Singles Day (Nov. 11) period,” and that TV sales in the U.S. were also showing “signs of improvement driven by early Black Friday promotions.”

However, those promotion-fueled sales are unlikely to spark a lasting rebound in LCD prices, so the business, which accounted for 28% of Corning’s top line last quarter, should remain a weight on its near-term growth.

Yet Corning’s other strengths easily offset the weakness of its LCD business. That’s why analysts expect the company’s revenue and earnings to have respectively risen 7% and 10% in 2017 (which ended on Dec. 31 but which hasn’t been reported yet), followed by 3% revenue growth and 6% earnings growth in 2018. Corning’s gross margin has also remained fairly stable over the past five years. 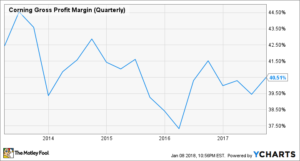 Corning currently pays a forward dividend yield of 1.9%, which is supported by a low payout ratio of 26%. Corning has increased its dividend by 29% over the past two years. For 2018 and 2019, it plans to boost the payout by “at least 10%” each year.

Corning also reduced its share count by about 29% over the past two years with buybacks. During the Credit Suisse conference, Tripeny stated that buybacks were a “particularly important mechanism, because we continue to view Corning as undervalued relative to our growth opportunities.”

However, Corning’s insiders aren’t eagerly buying the stock. Its insiders sold 2.15 million shares over the past 12 months, but only bought 4,000 shares — which raises some questions about the “undervalued” nature of the stock.

Corning isn’t a sexy growth stock, but the company has plenty of irons in the fire, a wide moat, and its pays a decent dividend, which makes it a reliable investment for this frothy market.

PrevPreviousIncreasing minimum wage puts money back into small business economy, says labour expert
Next3 TVs That Could Change How You Watch MoviesNext