Winning mission would launch in 2025 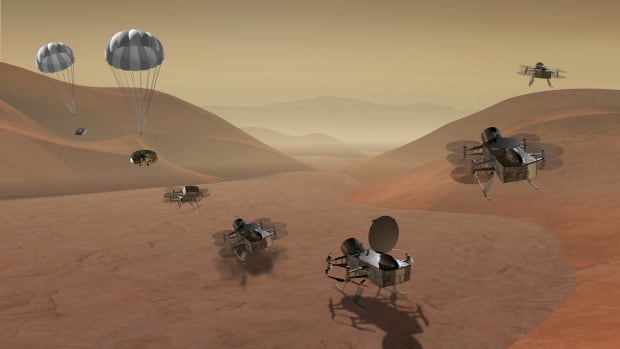 NASA’s next robotic mission to a far-off world may be either landing on Saturn’s largest moon, Titan, or a mission to comet 67P/Churyumov-Gerasimenko that would return samples to Earth.

The two finalists in the space agency’s New Frontiers Program were announced Wednesday afternoon in a teleconference.

The Comet Astrobiology Exploration Sample Return (CAESAR) mission to 67P/Churyumov-Gerasimenko will be a return to the remnant of our early solar system that was visited by the European Space Agency’s Rosetta mission in 2014. While that mission had a lander, Philae, it was not a sample-return mission.

“As everybody knows, comets are among the most scientifically important objects and they are the most poorly understood,” said Steve Squyres of Cornell University, who will lead the mission should it be chosen. “They contain the primitive building blocks of planets.”

Farewell, Cassini: How a spacecraft helped us expand the search for life
NASA reveals new data on ‘ocean worlds’ in our solar system
Squyres said that they chose to return to 67P/Churyumov-Gerasimenko as the comet has been well mapped out, which will aid in choosing a landing location. CAESAR would launch in 2025. Once there, it would collect samples from the comet’s nucleus, or core, and then return them to Earth in 2034.

The CAESAR mission, if chosen, would launch in 2025 and acquire samples from the nucleus of comet Churyumov-Gerasimenko and return them to Earth in 2034. (NASA)

The second mission to make the cut is Dragonfly. This drone-like rotorcraft would land on the surface of Titan, Saturn’s largest moon that has Earth-like weather systems and lakes, only consisting of methane rather than water. It would be able to explore the moon for hundreds of kilometres, flying from location to location.

This is another location that has been visited before. On Jan. 14, 2005, the European Space Agency’s Huygens probe — part of the Cassini mission that orbited the Saturn system until last September — landed on Titan, descending through the volatile clouds and revealing a rocky world.

“We can evaluate how far chemistry has progressed in an environment that we know has the ingredient for life,” said Elizabeth Turtle of the Johns Hopkins University Applied Physics Laboratory who will be the lead investigator. “Water-based life or hydrocarbon life.”

The two chosen missions have until January 2019 to prepare their final mission concept. The final decision will be chosen in July 2019.

Though two other missions — one to look for life around another of Saturn’s moon, Enceladus, and a second that would focus on exploring Venus — did not make the final cut, they will receive technology development funds to prepare them for the possibility of future missions.