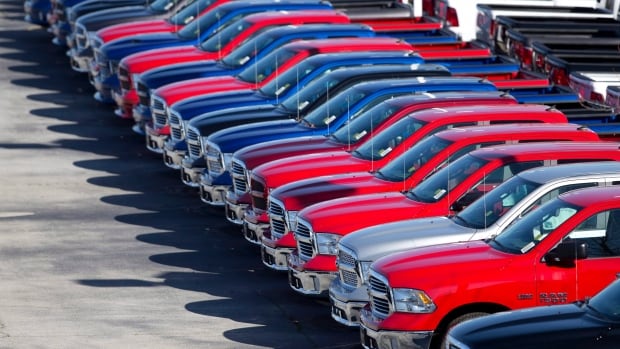 Canadian sales of light vehicles rose by 4.6 per cent in 2017, cracking 2 million units for the first time, thanks to record strength in truck sales.

According to a report from DesRosiers Automotive Consultants, overall Canadian light vehicle sales, which include light trucks and passenger cars, hit 2,038,798 last year, up from 2016’s 1,948,895.

“Quite a spectacular year,” Dennis DesRosiers told CBC’s Meegan Read. “The eighth consecutive year of growth, and the last four have been all-time records.”

Sales of light trucks rose by 8.7 per cent year-over-year to reach almost 1.4 million vehicles. Conversely, passenger car sales slipped by 3.4 per cent last year to come in at 639,823.

Light trucks accounted for 68 per cent of the market, an all-time record, DesRosiers said, adding that passenger car sales tumbled to their lowest level since 1964.

For the month of December, overall sales fell year-over-year by 1.1 per cent as a 12.5 per cent drop in passenger car sales overwhelmed a 3.8 per cent rise in light truck sales.

Fiat Chrysler said its full-year sales dipped four per cent to 267,052 units, as growth in its Ram brand was offset by softness in sales for its Jeep, Chrysler and Dodge brands.

Honda Canada reported a sales increase of six per cent in 2017, on sales of 197,251 units by Honda and Acura. The company said its Honda division set a fourth consecutive annual sales record, up six per cent over last year, on sales of 176,951 units in 2017, while Acura sales topped 20,000 unit but were flat compared to 2016.

Toyota Canada said record hybrid, truck and Lexus sales helped it to its best year on record, with overall sales up 3.1 per cent and 224,547 vehicles sold.