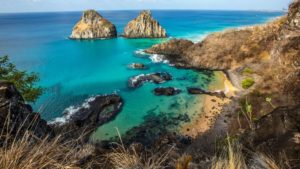 Unfortunately, miracles are hard to come by in this thing we call life, but if the opening of a sea turtle nest doesn’t make you a believer, precious little ever will.

Projeto Tamar, the Brazilian organization dedicated to the plight of the native sea turtle, usually tries to keep the opening of nests on the archipelago of Fernando de Noronha a private affair.

Luckily, I’m privy to insider information on this perfect piece of protected paradise in the Atlantic that’s 326 miles off the northeast coast of Brazil.

My wife has worked with ecotourism in Brazil’s best-kept secret for nearly two decades. She often gets a heads-up when nest openings — a little something I like to call tropical Christmas — are about to go down at this destination.
Green sea turtle nests line the golden sands on Praia do Leão and the island’s inner sea beaches between December and June. Anticipation builds as Tamar’s biologists slowly dig their hands into the sun-toasted sands (turtle nests sit about 1.5 feet deep) as if they’re opening a fragile present wrapped in delicate paper.

Having survived an incubation that includes eluding lizards, who view the eggs as a fine snack, and other natural enemies, babies the size of poker chips begin to emerge. And the miracle commences!

One by one, these reptilian soldiers battle wind and waves (not to mention seabird assaults from above!) as they instinctively make a break for the ocean some 150 feet off. The wind batters them around like house trailers in a hurricane while the waves shove them off course and back to the start like inconsequential nuisances.
Win or lose, this parade of will — how do they know how to do it? — is one of the coolest things on this Earth I’ve witnessed, even if only one or two out of 1,000 make it once they hit the water.

If you aren’t lucky enough to take in the turtle nest spectacle, don’t fret. Waking up in Brazil’s aquatic Eden, a postcard-perfect marriage of sea and sand that is uncrowded and undeniably gorgeous is a privilege in and of itself.
Noronha is expensive, time-consuming to reach and highly restricted. Tourism is limited to just an average of 700 visitors a day.

Having visited the island more than a dozen times over the years, my favorite place to rise and shine is eco-sensitive Ecopousada Teju-Açu (Estrada da Alamoa, Boldró; doubles from $715).

There’s no sea view, a rarity in Noronha because of highly restrictive building codes. But the inn’s understated bungalows — wrapped in rich, sustainable hardwoods surrounding an intimate pool area flanked by green, jungly vegetation — leave little doubt you’ve reached tropical utopia.
Visitors to Noronha usually take in the island’s two must-do excursions in their first few days:
— An all-day island tour by buggy to get their bearings and to be introduced to many of the 16 flawless beaches.
— A half-day boat tour in search of spinner dolphins (Noronha and Oahu, Hawaii, are the only two places in the world where spinner dolphins linger).

If you’re like me, once you know your way around, you’ll opt to head straight back to one of the world’s most idyllic beaches, the incomparable Praia do Sancho.
This stop-your-heart, crescent-shaped beach backed by cliff-cradled Atlantic rainforest is reachable no other way than a claustrophobic ladder dropping 230 feet through volcanic rock. That tells you all you need to know about the harrowing journey!

Whiling away a morning here basking in the sand, cooling off in the jade bay and trekking to a hidden waterfall (of course there is a hidden waterfall, but only in rainy season) is the stuff of pure bliss.
For lunch, I love the elevated position of open-air Mergulhão (Praia do Porto; main courses $26-56) overlooking the harbor on the other side of the island (Noronha’s main road is just 4.3 miles in length).
The Mediterranean-Brazilian menu is one of Noronha’s most innovative and the crunchy fish stuffed with shrimp, hearts of palm and coalho cheese is the perfect accompaniment to the view. And the cloth-filtered coffee with doce de leite? Another miracle.

Fernando de Noronha was used as a penal colony in the 18th century. When it was decommissioned as a former Brazilian military base in 1988, Brazil’s environmental protection agency and UNESCO pounced on it in an all-out effort to preserve one of the last pristine islands on Earth.

About 75% of the island is designated a national park. Entering its boundaries — nearly impossible not to do when you’re here — runs $62 for foreigners for a 10-day pass. A daily preservation tax starts at about $22 a person a day and rises after 14 days to discourage longer stays. So paradise doesn’t come cheap.

As I hop from beach to beautiful beach throughout the afternoon — Baía dos Porcos and Praia do Leão top the list after Praia do Sancho — the lack of crowds is astounding.

Where is everyone? They are sipping caipirinhas while watching one of Brazil’s most glorious sunsets from the makeshift lookout at Boldró Fort, that’s where.

Here the view over Noronha’s iconic Dois Irmãos (Two Brothers) — twin volcanic formations that pop out of the sea like angelic sentinels in front of Baía dos Porcos — is one of the island’s most dazzling spectacles.

Nocturnal diversion is the one side of Noronha that leaves something to be desired. There are a few bars and outdoor spaces for a drink, but this is no nightlife destination.

Instead, I like to focus on feasting. Fishing restrictions mean much of the seafood comes from the mainland, but that’s no consolation prize.

With Brazil spending the better part of the past few years mired in recession and political turmoil, Noronha just keeps doing what it does: Churning out one day in paradise after another.

Brazilians equate the island with heaven itself. It’s the one thing all 207 million of them can agree on these days.