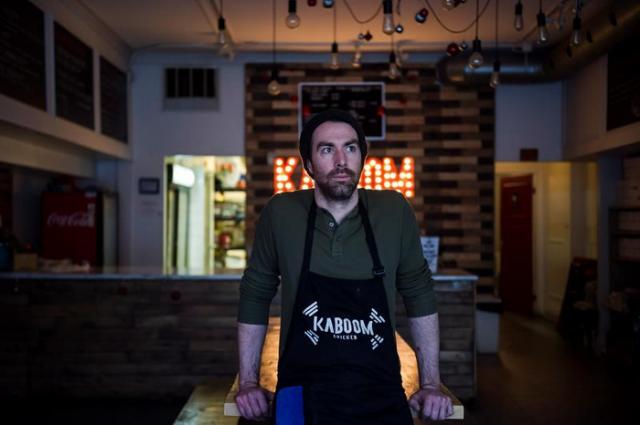 TORONTO — Ontario’s new $14 per hour minimum wage does not take effect until Jan. 1, but Chris Stevens has already taken steps to ensure his restaurant can afford the added expense.

The co-owner of Kaboom Chicken in Toronto’s Leslieville neighbourhood has raised menu prices in anticipation of the wage hike. He and his business partner also plan to reduce their staff’s hours in the new year and take on more of the work themselves in order to save money.

New Year’s Day marks the first of two scheduled hikes, with the second to take place on Jan. 1, 2019, when the minimum wage will go up to $15. After that, it will be adjusted to keep pace with inflation.

The Ontario government says the change will bring greater purchasing power for working families and a stronger economy overall, but many small business owners across the province are wondering how they will maintain profits in the face of increasing payroll costs.

“It’s hard to see a way that you can lose that much of your revenue in a short period of time without having to revamp a lot of things — either letting staff go, doing a lot of the work yourself, raising prices,” Stevens said.

“We believe the minimum wage should go up and people should make a living wage, however I think (the hike) puts the onus on small businesses,” he added.

“And I’m anticipating that (more senior) staff who are already getting $15 an hour are going to expect to get $17 or $18 or more because minimum wage is approaching $15,” he said.

The Financial Accountability Office of Ontario — an independent watchdog agency that reports to the provincial legislature — has estimated that the minimum wage hikes could result in a loss of 50,000 jobs as employers struggle to keep up with staffing costs.

“Some businesses will attempt to reduce expenses by substituting minimum wage employees for higher paid, more productive workers or by increasing automation,” the agency said in a report released in September. “This would lead to some job losses for minimum-wage workers.

But the higher minimum wage would also increase consumer spending, “stimulate economic activity and lead to job creation (that could) offset some of the loss in employment,” it said.

“We’ve raised minimum wage 70 per cent since 2003 and we’ve seen increased employment right through that period,” Flynn said at a news conference.

In June, over 50 economists at universities across Canada co-wrote an open letter supporting Ontario’s $15 minimum wage plan, in part, they said, because higher wages make for a stronger economy.

“As those with lower incomes spend more of what they earn than do those with higher incomes, raising the minimum wage could play a role in economic revival,” the economists wrote.

“For years, we have heard that raising the minimum wage will kill jobs, raise prices and cause businesses to flee Ontario. This is fear-mongering that is out of line with the latest economic research.”

But some small-business owners are skeptical they’ll see a financial benefit.

Stevens said there is no guarantee the higher minimum wage will lead to more money being spent, particularly at restaurants and bars.

“What are you giving them more money for? Is it so that they can go to restaurants and spend money and have a nightlife, or to put food on the table and pay the rent?” he said.