Frozen eggs, student loans and other unexpected reasons to get a prenup 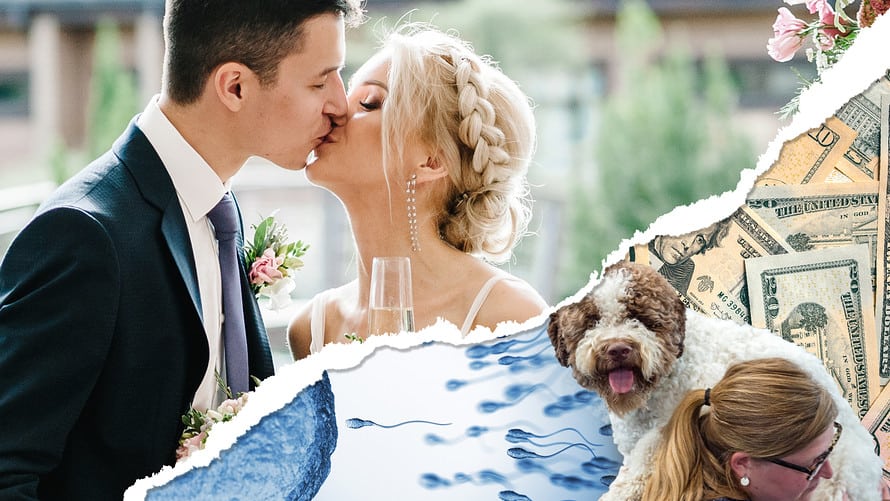 It’s rare that a celebrity engagement or secret marriage passes through the tabloid headlines without some speculation as to whether the couple is getting a prenuptial agreement.

For many, the idea of a prenuptial agreement — essentially a contract to hash out the division of assets in the event of a divorce — is reserved for celebrities or other ultra-wealthy betrothed eager to protect their own or their family’s money.

Even brides and grooms without large trusts or real estate holdings likely have something precious they want to protect.

The reality is that even brides and grooms without large trusts or real estate holdings likely have something precious they want to protect. And they’re increasingly taking steps to do just that. More than 60% of respondents to a 2016 survey by the American Academy of Matrimonial Lawyers said they’d seen an increase in the total number of clients seeking a prenup in the three years leading up to the survey.

Divorce laws can vary widely by state and they may change during the course of a marriage. For example, some states, known as community property states, divide property in the event of a divorce equally between the two parties based on the assumption that all of the assets acquired during the marriage belong to both parties.

In states that go by equitable distribution, courts may consider which spouse acquired the property during the marriage, among other factors, in dividing the property fairly (though not necessarily equally).

Though many couples use a prenup to protect them beyond their state laws, one reason for the agreement could be to make sure that if you get divorced, the legal landscape is the same as when you got married. If you like your state’s law as it is written, you could use a prenup to “lock it in,” said Alyssa Rower, a New York City-based family and matrimonial law attorney.

Below are some other unexpected reasons couples may want to consider a prenup:

In the vast majority of cases, marriage does not affect the status of your student loans — they’re in the borrower’s name and they’ll remain in their name in the event of marriage and subsequent divorce.

But if a couple plans to attack one partner’s student loans together, the other spouse may want to consider whether they’d like to be compensated for that help in the event of divorce, said Kelly Frawley, a partner focused on matrimonial and family law at the firm Kasowitz, Benson Torres. That’s something the spouse who is helping with the loans can write into a prenuptial agreement, she said.

The partner can even specify that if marital money — and not just their own separate property — is put towards the loans that they should receive some kind of credit, said Emily Pollock, also a partner at the same firm. “You still have to think about where that money could have gone,” like towards saving for a home or retirement, for example, she said.

Dogs and cats can be one of the most precious and yet difficult to value assets in a marriage, which is why couples may want to hash out their pet’s future in the event of divorce.

It’s unlikely a pet custody arrangement, complete with visitation and other provisions you might set up for children, would be enforced by the courts, Pollock said. “There is case law that says that the courts won’t spend any resources dealing with an access schedule for a pet,” she said.

Still, it may make sense for a couple to draft an agreement about how they plan to determine ownership of a pet in the event of divorce. Is the pet going to go to one partner, will it be shared by the partners or will it follow the kids? These are issues that can be discussed in a prenup, Pollock said.

You froze your eggs or sperm

Advances in reproductive technology over the past several years mean that partners are increasingly coming to a marriage with a different kind of asset: frozen eggs or sperm. And couples should be thoughtful about how they want to address that in the event of divorce, said Colleen Quinn, a Richmond, Va.-based attorney who specializes in adoption and assisted reproductive technology law.

Couples can designate in advance whether sperm or eggs will be considered separate property in case of divorce, Quinn said.

Of course, not all situations are so straightforward, Quinn said. In some cases — particularly, though not always, with same-sex couples — partners will plan to create embryos with the egg or sperm of one of the partners and reproductive material from a donor, which can create unexpected complications in the event of a divorce.

Advances in reproductive technology over the past several years mean that partners are increasingly coming to a marriage with a different kind of asset: frozen eggs or sperm.
“I’ve run into this a lot, where they’ll split and the one wife who used her eggs will want to transfer the embryo with donor sperm into herself and the clinic will refuse to do it without the sign off of the estranged wife,” Quinn said.

To avoid this scenario, couples can write into a prenup that any embryo created with one partner’s egg or sperm with donor reproductive material returns to that spouse in the event of a divorce — as long as that partner purchases with it their separate money, Quinn said. She added that that partner should also be the only name listed on the purchasing agreement and on the cryobank freezing agreement.

“Issues come when they have purchased the sperm with joint marital money or they’re both on the purchase document,” she said.

One issue that’s difficult to hash out in advance in a prenup: the ownership of an embryo created during the marriage with both partners’ reproductive material, Quinn said. That’s why it’s important that the spouses sign an “embryo disposition agreement” when they’re creating the embryo to decide who it might belong to in the event of divorce, she said. That document should be separate from the contract provided by the clinic.

Couples or individuals will rarely receive this type of legal guidance when engaging in fertility treatments, unless they seek it out, Quinn said, and even then lawyers aren’t always educated on the particulars. “It’s just all part of our evolving medical technology and it’s the law having to keep up,” she said.

You have a business interest

Entrepreneurs may come into a marriage with a stake in their business, which they should address in any prenuptial agreement, Rower said.

“Maybe you have no money, but you have a lot of potential down the road. That is something you cannot protect without a prenuptial agreement,” she said. “If you have something that’s hard to value that could be a tricky issue in any divorce.”

Without some sort of agreement, in the event of a divorce, the couple will hire experts to determine the value of the business and then “you fight over the percentage” that one spouse gets, Rower said. In those cases, often the partner who brought the business into the marriage doesn’t have the liquidity at that moment to buy their ex-husband or wife out.

That’s why it’s important to determine ahead of time whether business interests will be marital or separate property in the event of a divorce, she said.

Even if neither of the parties has a business interest at the time they enter the marriage, they may want to protect any future businesses.

Gabriel Kaplan, a New York City-based financial planner, said he encountered a client who raised seed capital for their business and the investors required the client to get a prenup to protect their ownership stake in the business from their spouse.

Even if neither of the parties has a business interest at the time they enter the marriage, they may want to protect any future businesses or specify that spouses would get a stake (or not) in any business launched during the marriage, said Shannon McLay, the founder of the Financial Gym, a financial advisory firm.

“I didn’t know I was going to start a business when I got married,” she said. But that’s exactly what happened. And then she got divorced. McLay knew she wanted to acknowledge her ex-husband’s role in building the business. So they created a separate LLC for her business that her ex-husband partially owns.

“All of my retirement assets went into building this business,” she said. “When we got divorced those assets would have been his if they were still in existence. In total fairness to him I have half of his retirement assets. For me that’s how I thought about it.”

The earning potential of one of the partners may change

If either partner is planning to take a step back from their career as part of the marriage to raise kids or to accompany their partner in a move that will boost their spouse’s career — and hurt their own — the couple may want to address that in the prenup, experts say.

“That person is unlikely to be able to get back into the workforce and to get the kind of income that they would otherwise be able to get,” said Chris Chen, a certified financial planner with Insight Financial Strategies in Waltham, Mass.

PrevPrevious6 Resume Mistakes to Avoid at All Costs
NextThe true cost of an iPhone over your lifetime: $300,000Next