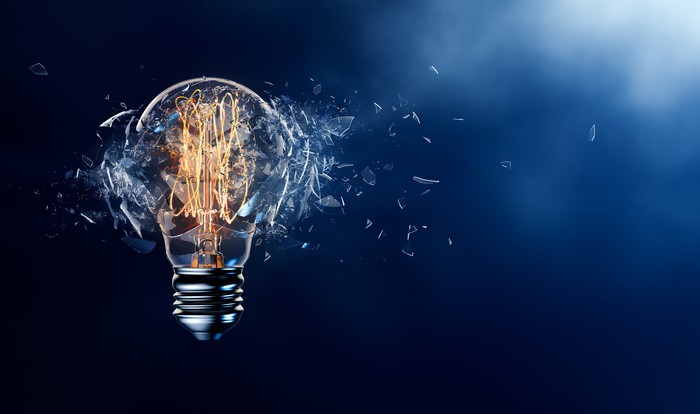 John Flannery is out and Larry Culp is in. Here’s why that may not be the silver bullet for the industrial giant’s underperformance.

Well, that was fast.

Pulling its own version of an “October surprise,” industrial behemoth General Electric (NYSE:GE) announced on the first of the month that it was immediately replacing CEO John Flannery — who had been on the job for just over a year — with board member H. Lawrence Culp, Jr., former CEO of fellow industrial conglomerate Danaher.

Here’s why the board lost confidence in Flannery, what it may be hoping to gain by hiring Culp, and what it’s likely to mean for investors.

The fall(en) guy
GE was already in trouble when Flannery took the helm in August 2017. Thanks to underperformance in its flagship power segment, an oil and gas segment that had been decimated by the oil price slump, and widespread dissatisfaction with then-CEO Jeff Immelt’s leadership, the company’s stock price had fallen from above $30 per share to the mid-$20s.

Sometimes, the stock market is willing to give the new guy a break. (For example, this morning when GE announced that Flannery was out and Culp was in, GE’s shares rose nearly 13%.) For Flannery, there was no such honeymoon, as investors concerned about a potential dividend cut continued to exit the stock.

Flannery did his best with a weak hand, setting in motion radical changes to GE’s operations. He did end up cutting the dividend in an attempt to shore up GE’s ailing finances. He also pulled the plug on Immelt’s digital program, and set in motion plans to sell GE’s low-margin consumer lighting business as well as spin off its troubled oil and gas business and its solid healthcare business. He intended to continue to cut back on GE’s corporate costs to free up resources for its remaining power and aviation businesses.

But new and unexpected problems continued to crop up, including the discovery that Immelt’s 2018 guidance had been overly rosy, a previously unforeseen insurance charge for GE Capital, and a shutdown-causing failure of one of its HA power turbines that raised further concerns about the power unit.

Although Flannery made big changes — and it takes time to turn a massive ship like GE — they apparently weren’t happening fast enough for GE’s board, which unanimously voted for his ouster. Ultimately, Flannery may have been a victim of poor timing more than anything else. He took the helm as GE was on the way down, and encountered several unpleasant surprises during his year at the top, finally exiting as some analysts said GE had likely hit bottom and could be a buy.

Lucky Larry
If Flannery is a victim of the poor timing that has plagued GE for years, new CEO H. Lawrence Culp is likely to be the beneficiary. A lot of the unpleasant work — including a major dividend cut and multiple rounds of lowered guidance — came during Flannery’s brief tenure. So, what is the board anticipating from Culp?

Well, they’re hoping for a repeat performance of Culp’s tenure at Danaher, certainly. As CEO of Danaher from 2000 to 2014, Culp was highly successful, as the stock chart of both companies from this period shows:

In a press release, GE was effusive in its praise for Culp:

During his tenure he led the highly successful transformation of [Danaher] from an industrial manufacturer into a leading science and technology company. Under Mr. Culp’s leadership, Danaher executed a disciplined capital allocation approach, including a series of strategic acquisitions and dispositions, a focus on investing for high-impact organic growth and margin expansion, and delivering strong free cash flow to drive long-term shareholder value. During his 14 years at the head of Danaher, the company’s market capitalization and revenues grew five-fold.

But perhaps the biggest point in Culp’s favor is that he’s a GE outsider. He only joined GE’s board in April 2018 as part of a major board shakeup. Of the new members, he was hailed by analysts as a particularly good choice given his background. After a pair of GE insiders — Immelt and Flannery — failed to deliver the performance investors were demanding, it’s logical that the board would try an outsider in the role.

Moving forward
So, now what?

Well, we don’t really know what Culp’s plans are: Will he continue the operational streamlining (read: business sales and spinoffs) begun by Flannery, or even accelerate it? During his tenure at Danaher, the company completed many acquisitions, so Culp may decide to go that route instead. All we have to go on for now is the anodyne statement he made in a press release:

GE remains a fundamentally strong company with great businesses and tremendous talent. It is a privilege to be asked to lead this iconic company. We will be working very hard in the coming weeks to drive superior execution, and we will move with urgency. We remain committed to strengthening the balance sheet including deleveraging. Tom [Horton, former chairman of American Airlines, who was just named GE’s lead director] and I will work with our board colleagues on opportunities for continued board renewal. We have a lot of work ahead of us to unlock the value of GE. I am excited to get to work.

This statement seems to be sending the message to investors that there are no sacred cows, and that radical change is a distinct possibility. This is exactly what investors want to hear. Of course, for GE, radical change has already been underway for years. It just hasn’t panned out as hoped. So, perhaps Culp’s biggest asset is that he isn’t Flannery (just like Flannery’s biggest asset may have been that he wasn’t Immelt).

Big changes ahead?
Culp has signaled a desire to make big changes to GE, and investors have already responded by bidding up shares. His successful tenure as longtime CEO of another industrial conglomerate makes him an attractive choice to lead GE out of the wilderness. But the same fundamentals that crippled Flannery — a sagging power unit, complex corporate structure, and balance sheet concerns — won’t vanish just because a new guy’s in the corner office. In particular, I want to hear details from Culp about how he will turn around — or cut loose — the power unit before I make a further investment.

Like everyone else, I’ll be watching and waiting to see what Culp’s ultimate strategy is. Until then, though, GE remains a troubled company with a tough road ahead, and no clear path to outperformance. This could be a turning point for GE… or it could be August 2017 all over again.