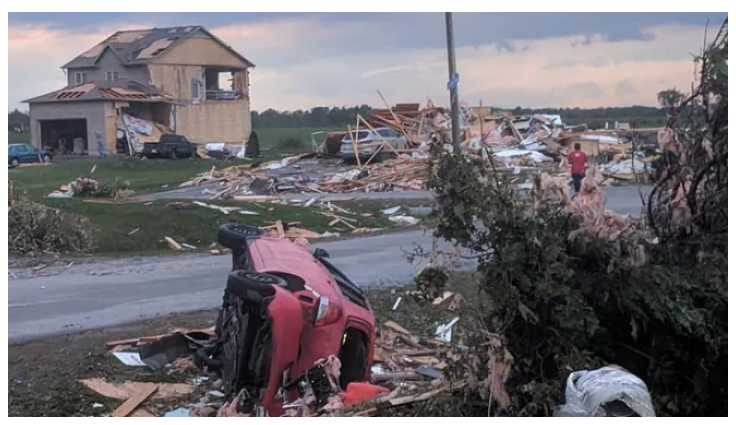 A tornado tore through parts of Ottawa and Gatineau, Que., on Friday, seriously injuring four people, flattening buildings and knocking out power for almost 150,000 homes and businesses.

The twister touched down in Dunrobin — a rural community in Ottawa’s west end, where multiple homes were severely damaged — before heading east across the Ottawa River toward Gatineau Park, according to Environment Canada.

“I don’t know how to describe it, it got levelled,” resident Dan Spinks said of his extensively damaged home in Dunrobin.

He said his neighbours’ home was also levelled and debris had been tossed around the neighbourhood.

“The dumpsters from the Dunrobin store are in my backyard… that’s about two football fields [away],” he told CBC’s All in a Day.

As of 10 p.m. ET on Friday, six people from the Ottawa area had been taken to hospital, with four in serious condition, according to paramedics.

A dozen other minor injuries were reported, according to Ottawa’s general manager of emergency services.

Anthony Di Monte said earlier there were reports of 30 to 40 damaged homes in the community, and there were indications some people could be trapped in buildings.

“In these situations, we kind of have to go house to house. Power’s down. Communication is problematic. And in a couple of areas fire is indicating that some people are trapped and we’re attending to them,” he said. He asked people to stay away from the damaged areas.

Early reports from Gatineau said five people sustained injuries and were taken to hospital, while hundreds were left to seek shelter. As well, more than 50,000 Hydro-Québec customers were without power as of 12:30 a.m. on Saturday.

Hydro Ottawa said more than 147,000 customers are without power. It is unclear when power will be fully restored. Traffic lights are also out in several spots across the city. They should be treated as a four-way stop.

The power loss “is not concentrated anywhere. It is just spread across the city, from Kanata all the way to Orléans,” said Joseph Muglia, director of distribution operations.

The power company is in “damage assessment stage” said Muglia, and hopes to start restoring service in the morning.

“We hope to gain some control of that overnight and certainly by morning we will start to see those numbers come down,” he said.

Muglia said however, the damage is serious, nearly as bad as the 1998 ice storm.

“This is the worst storm that we have dealt with in the history of Ottawa … at least since 1998.”

The storm “tracked for quite a significant distance,” said Peter Kimbell, a warning preparedness meteorologist with Environment Canada.

“We know for sure that there was a tornado in Gatineau because we have colleagues of mine who actually saw it.”

Based on damage reports, the tornado was likely an EF-2, which have sustained winds from 179 to 218 km/h, he said.

Local councillor Eli El-Chantiry, speaking from the corner of Dunrobin and Thomas Dolan roads, said there are at least 20 damaged homes nearby.

“In 30 years I’ve never seen anything like this. It’s devastating, the way it is now,” he said.

He said West Carleton High School, where the Red Cross is setting up, and the Dunrobin Community Centre are open to residents seeking shelter.

He said emergency calls should go to 911, while people seeking other help should call 311. The city has asked people not to tie up those numbers unless the need is urgent.

Judi Varga-Toth, who happens to be running against El-Chantiry in the upcoming municipal election, said her home, in the same area, is literally the only one standing on her street.

“I’m looking at where my next-door neighbour’s house is and it looks as if there was never a house there,” she said.

Her husband was home when the storm hit, and their neighbour was badly hurt, she said. He brought the neighbour’s child home when the woman was taken to hospital.

Varga-Toth, meanwhile, was at a local rural fair when, shortly before 4:30 p.m. ET, everyone was told to get into the hockey arena or curling club. As the storm passed, people in the arena began getting texts about the devastation in Dunrobin.

There were also reports of heavy damage in the Hunt Club and Greenbank Road areas in south Ottawa, including downed power lines. Kimbell, the meteorologist, said that damage is likely the result of a downburst, another kind of violent wind disturbance, and not the tornado.

The National Capital Commission tweeted out that Gatineau Park would be closed until further notice.

PrevPreviousHow much is too much?
NextU.S. equities dominate as investors pile back into risk and laggards bounce backNext