Yet for all the worries about mounting trade friction, the stock market is expected to remain resilient as a robust economy and strong corporate earnings help to provide much needed support.

“It may not seem like it, but the SPX hasn’t seen a 1% decline since June 25 or a 1% gain since June 1. That’s pretty amazing knowing that many high-profile stocks have gotten hurt over the last few months,” said Frank Cappelleri, technical strategist at Instinet LLC.

That is not to say that market participants are immune to trade-related headlines. Stocks may have closed out the week higher, but investors were decidedly more risk-averse with some $5.6 billion in funds exiting from equities, according to Bank of America Merrill Lynch.

Phil Orlando, chief equity market strategist at Federated Investors, believes the ongoing trade war is among the several headwinds that the market is facing, along with the Federal Reserve’s move to tighten monetary policy and a potential policy shift from Democrats retaking the House in midterm elections. But a powerful economic growth is likely to prop up the market, insulating stocks from a prolonged decline, he said in a note.

“If equity markets do experience some increased turbulence and a 5% air pocket, this could represent an attractive buying opportunity,” said Orlando who maintained his year-end S&P 500 target of 3,100.

And for proof that this latest bout of global fight will not have a lasting impact on stocks, DailyFX published the chart at the top of this report that showed the Dow Jones Industrial Average DJIA, +0.03% steadily rising over the past century through myriad seismic geopolitical events, crises, and trade wars.

Other than trade, investors are expected to focus on the following issues next week:

1. The 10-year anniversary of the financial crisis
In September 2008, arguably the greatest moneymaking machine in the world—the U.S. financial industry—teetered on the verge of collapse and the stock market was in a free fall.

Ten years on, U.S. financial institutions are stronger and stocks are trading at near records.

“The U.S. banking industry is not at risk at present. Housing is not in trouble,” Dick Bove, chief strategist at Hilton Capital Management LLC, told MarketWatch.

Bove, in the years leading up to the 2008 subprime crisis, had not only warned that the housing bubble was about to burst, but also predicted that the U.S. was headed for severe financial trouble.

Still, Bove, who recently went from being an analyst to an investor, warned that if the Fed pushed ahead with its interest-rate hikes, it could trigger a global recession on the heels of a stronger buck. Since foreign countries often borrow in dollars, a firmer greenback will exacerbate their debt burden.

How markets have fared since the financial crisis

2. Rising Treasury yields
U.S. Treasury yields continue to rise in line with the Fed’s hawkish bias with the 10-year Treasury yield TMUBMUSD10Y, +0.84% hovering around 3%—a level that has historically flagged a potential bear market in stocks.

Oliver Jones, markets economist at Capital Economics, believes the Fed will continue to hike rates by 25 basis points once a quarter between now and the middle of 2019, pushing the 10-year yield to 3.25% by the end of 2018. He also projected the yield curve–the spread between the 10-year and 2-year yields–to invert by the end of June which could signal a recession.

3. Don’t write off tech yet
Tech shares have been under a great deal of pressure with the Nasdaq COMP, -0.05% the only major benchmark to trade in the red this month. Even so, Lindsey Bell, investment strategist at CFRA, thinks it’s premature to write off tech names, in part due to a reconstitution of the sector.

On Sept. 24, Facebook Inc. FB, +0.59% and Alphabet Inc. GOOGL, -0.35% GOOG, -0.24% two relatively weak stocks, will move into a newly created communication services sector that will replace the telecommunications sector. With their removal, Apple Inc. AAPL, -1.14% and Microsoft Corp.’s MSFT, +0.41% performance will become more important to the tech sector, according to Bell. 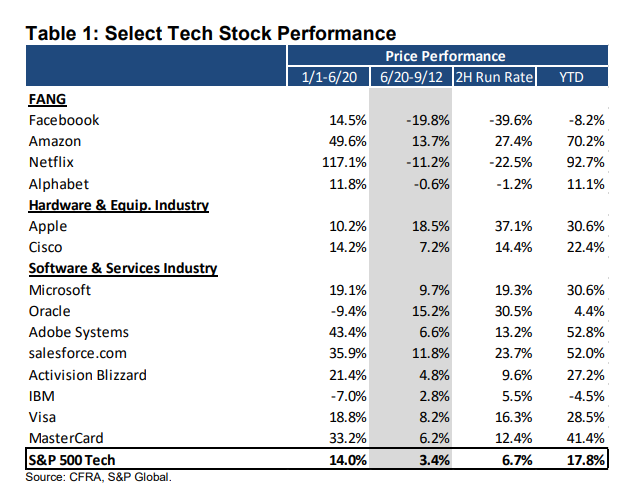 “We view the increased exposure to Apple and Microsoft, with their strong cash flow and potential for upside to consensus estimates as a positive for the group. Increased momentum from stocks that had lagged earlier in the year should also prove to be a tailwind for the sector into the end of the year,” he wrote in a report.

4. The dollar is king
The U.S. dollar DXY, +0.43% is expected to continue rising for now on the back of a flourishing economy and trade tension. But a strong buck could hurt companies with significant overseas business as it makes their products more expensive.

“The U.S. dollar remains the market’s default currency of choice as Group of 10 [economies] foreign exchange lacks a cohesive theme. The unraveling of synchronized policy normalization and idiosyncratic risks will continue to benefit the U.S. dollar,” said Claudio Piron, emerging Asia foreign exchange strategist at Bank of America Merrill Lynch, in a note.

“The problem is that the rest of the world, particularly emerging market economies, became dependent on the abnormally low rates at which dollars could be borrowed and borrowed lots of funds in dollars. Now they are getting hit by the triple whammy of rising U.S. interest rates, weaker local currencies relative to the dollar, and capital outflows,” said Ed Yardeni, chief investment strategist at Yardeni Research, in a client note.