These Three Cannabis Stocks Have Been Hijacked By Traders 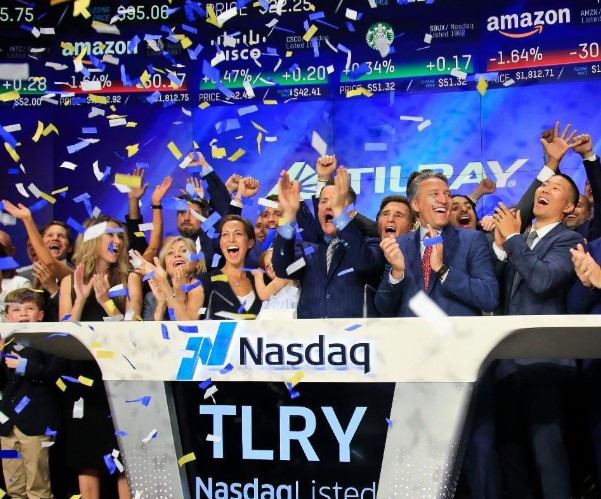 Cannabis stocks were sagging in the summer until Constellation Brands stepped up its commitment to the sector in a way that is unrivaled. The company, already a major investor in Canopy Growth, announced on August 15th that it would invest an initial C$5 billion in the company, effectively taking control of the largest Canadian licensed producer (LP) taking into account the warrants that were included in the deal as well as the majority of the Board of Directors. The original investment, announced in in late October last year, was about developing a cannabis-based beverage, but this deal is all about positioning Constellation to be a global leader in the cannabis industry.

Not surprisingly, the Canadian LP stocks soared on the news, as investors priced in the likelihood that other alcohol companies will enter the space and perhaps buy an LP or at least partner with it. Over the balance of the month, the LP stocks, down more than 27% on August 14th year-to-date, climbed into the green. Rumors that Diageo was in talks with three LPs helped the market rally 34% for the entire month of August.

While the rising tide has certainly lifted all boats, three stocks in particular have rallied sharply since August 14th, Canopy Growth, Cronos Group and Tilray: 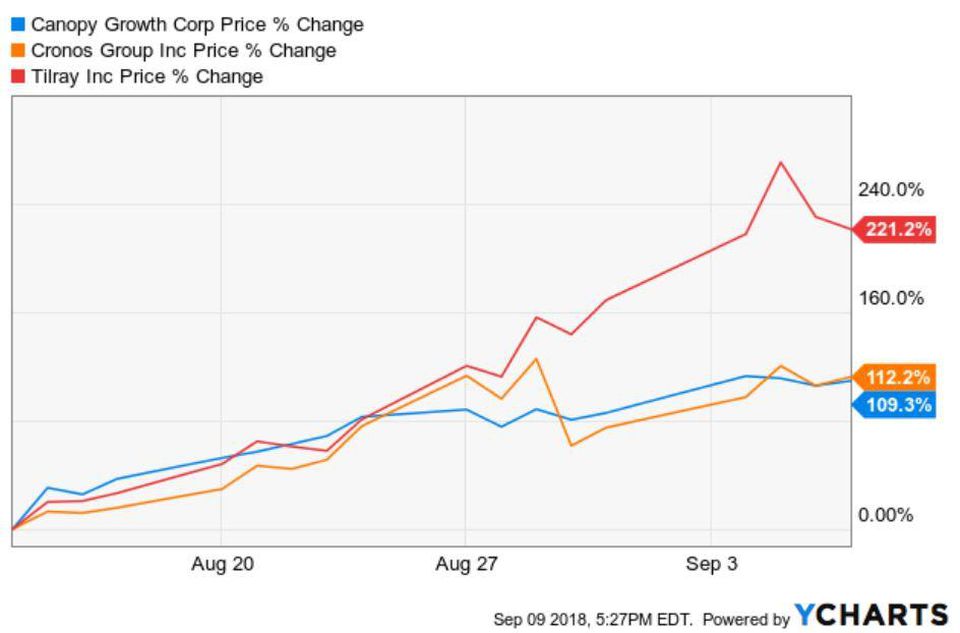 These three companies share a common trait in that they are all listed on the NASDAQ or the NYSE. Cronos Group was the first Canadian LP to attain a major U.S. exchange listing earlier this year. Canopy Growth followed in May with its NYSE listing, and Tilray listed as an IPO exclusively on the NASDAQ in July. Until then, the only other names were Innovative Industrial Properties, the Cannabis REIT, which I profiled earlier this year, and GW Pharmaceuticals, the biotech company that is the first to get FDA approval for a cannabis-derived pharmaceutical, Epidiolex.

In my view, this listing status has attracted traders in the U.S. who have avoided the sector, which trades primarily on the Toronto Stock Exchange or junior exchanges in Canada, with OTC listings as well. The volumes of these three stocks have exploded over the past few weeks, with a peak on Thursday, when Canopy’s dollar-volume in the U.S. alone reached $2 billion and Cronos Group and Tilray exceeded $1 billion each. The trading in the U.S. has exceeded Canopy’s TSX volume regularly, and Cronos Group U.S. trading volume has dwarfed its Canadian trading. Tilray traded more than 100% of its float on Thursday, as the only shares that can trade are the those that were sold in the IPO (10.35 million), and 13.5 million shares traded.

Tilray topped out near $98 less 8 weeks after conducting its IPO at $17 and sports a market cap at the 9/7 closing price of $77.89 of $7.9 billion, based on 101 million fully-diluted shares. The company has a tangible book value, adjusted for the IPO proceeds, of approximately $193 million. According to the consensus estimates at Sentieo, Tilray is projected to generate sales of $153 million in 2019, so the stock is valued currently at 51X next year’s sales. Absent a secondary offering by the company, similar to what both Green Thumb Industries and MedMen have now both done shortly after going public, the float, at 10% of the fully-diluted shares, will remain limited to the IPO shares until January.

Traders have pushed these three stocks much higher, in my opinion, than their peers that don’t trade on a major U.S. exchange. Over the balance of the year, it is likely that some of the other TSX-listed companies, including Aphria, Aurora Cannabis, CannTrust, HEXO Corp and Green Organic Dutchman, could join this list, diluting this source of demand for the current three companies. Additionally, the companies could take advantage of their recent rallies and sell stock in a public offering.

Because of this technical dynamic, I am cautious in the short-term on these three names enjoying their unique listing status. For now, the traders appear to be in control, though. Even a short-seller attack on Cronos couldn’t stop the stock from advancing to all-time highs days later despite a short-term plunge in its price. As an aside, I defended the company, as the arguments made by Citron Research were contrary to the facts. Still, I can understand how Citron thinks the stock is very overvalued, especially when looking at the rear-view mirror metric of trailing sales.

Long-term investors should be aware that these three stocks are benefiting from a very favorable near-term dynamic, while traders should be careful not to get caught up in the momentum if it breaks due to the factors I have mentioned. Positively, the recent performance of these stocks and the broader sector is a sure sign of the interest in high quality cannabis companies and bodes well for the sector going forward.