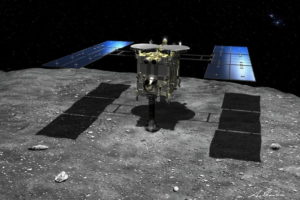 After a 42-month journey through space, the Japanese probe Hayabusa 2 has finally reached its destination — a rocky little cube named Ryugu, formally known as Asteroid 162173, some 200 million miles from Earth. The Japan Aerospace Exploration Agency (JAXA) confirmed the arrival of the spacecraft in an announcement earlier this week.

During its 18-month mission, the space probe will analyze the tiny rock with a series of tests, deploying three miniature rovers to the surface. Before leaving, it will even blast a new crater into the surface, gather up some of the material dislodged, and then return to Earth with the samples aboard.

The asteroid was named after a dragon’s palace from a Japanese folk tale. In the story, a Japanese fisherman emerges from the undersea lair with a box filled with treasure.

It’s technically classified a near-Earth object (NEO), as it orbits in an elliptical path from Mars to Earth and back again. There’s no chance it will strike the Earth, however, at least not in the next few hundred years.

The spacecraft used its thrusters to maneuver into a stable orbit within 12 miles of Ryugu, where it began to analyze the asteroid for the rest of its mission. Ryugu, strewn with boulders, is roughly diamond-shaped and features an equatorial ridge. As Earth Sky points out, it’s similar in appearance to the asteroid Bennu, the target that the NASA Osiris-REx mission will encounter in 2020.

The mission, which was launched in December 2014, carries four small landers. Three are from Japan (called MINERVA-II) and one is from Germany (called MASCOT-1, for Mobile Asteroid Surface Scout). These aren’t the conventional rovers you’re familiar with, like the ones taking selfies on Mars. Because the half-mile-wide Ryugu has very low gravity, the small landers have only the weight of a drop of water here on Earth.

So the landers don’t have wheels — instead, the small foot-wide boxes have internal offset weights that allow them to “flop” across the surface with short hops.

Hayabusa 2 will also get to blow some stuff up while it’s there. Using a “space cannon,” the probe will blast a copper projectile at the surface to create a landing crater and expose material from beneath the surface. During a brief touch-and-go landing on the surface, the probe will scoop up some of the debris and store it for the return voyage.

In 2020, the probe will drop the samples in a saucer-shaped reentry capsule which will land via parachute in Australia.

“Together with all of you, we have become the first eyewitnesses to see asteroid Ryugu,” said project manager Yuichi Tsuda. “I feel this is an amazing honor as we proceed with mission operations.”

This article originally appeared on Engadget.